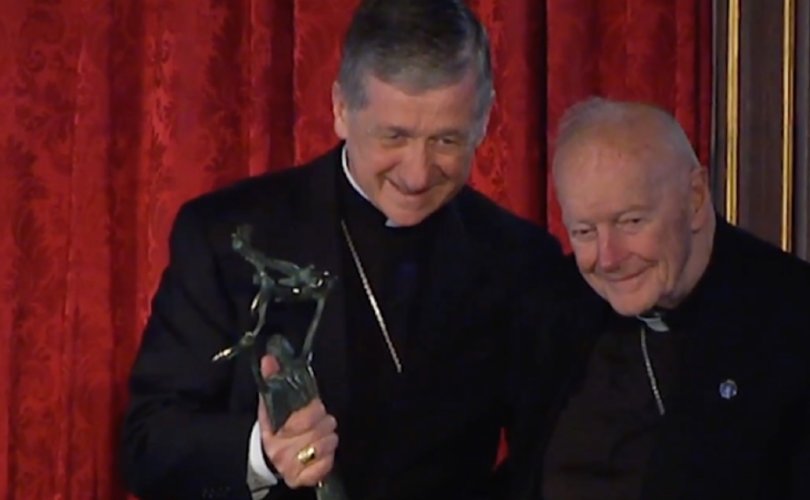 WASHINGTON, DC, August 17, 2018 (LifeSiteNews) – The normal hum of daily parish life in the Archdiocese of Washington, DC, was rudely interrupted a few weeks ago as Catholics began speaking with one another, expressing alarm over our disgraced former Cardinal McCarrick’s lifetime of homosexual abuses.

Incredulity ensued as McCarrick’s ‘brother’ bishops claimed that all this occurred under their collective pastoral noses––noses which detected not even the slightest whiff of suspicious activity, despite belonging to our highest caliber, wise and discerning shepherds.

Then, with the release of the scathing Pennsylvania Grand Jury investigation revealing decades of sexual abuse by Catholic priests––often covered up by their bishops––alarm has quickly morphed into exasperation and outrage.

Here in Washington, DC, much of that exasperation is now reaching a crescendo with no sign of retreat, and much of it is aimed at our current Cardinal Donald J. Wuerl.

At this point, our prelates would do well to sit still and pay attention to what engaged members of the laity are saying.

Try as they may with their anemic official statements, our American Cardinals and Bishops are frittering away the trust and goodwill they once enjoyed.

Following is a litany of statements from some of the ordinary men and women who fill the pews each Sunday.

Dominic Tondo, a man who is extremely active in men’s ministry in his parish, said:

None of the recent statements from the Archdiocese of Washington, DC address the issue of active homosexual priests and the abuse of young seminarians. This concerns me very much because today’s seminarians are our future priests and the future of the Church.

I would like to know if the Archdiocese of Washington, DC is still actively recruiting homosexual men into the priesthood, as Cardinal McCarrick was as late as 2006 when my son attended a diocesan Men’s Discernment Retreat Weekend?  He was shocked when one of the first things that came out of then-Cardinal McCarrick’s mouth was an invitation to gay men; that being gay should not stop you from becoming a priest.

My son wanted to leave the retreat right then and there. It certainly did not make the priesthood look very attractive.

How many other dedicated, qualified young men were turned away by McCarrick’s statement?

From a JPII Institute graduate who has offered years of service to the Church:

There have been plenty of statements made by various Cardinals and Bishops lately, but I’ve yet to hear one of them take responsibility for what they allowed to happen, to renounce their part (active or passive) in allowing this evil to infiltrate the church, to commit to true repentance and penance, and to make resolution to the victims and to all the faithful they shepherd, that this evil will be rooted out and destroyed – even if it means their own resignation and the resignation of the entire college of Bishops.

Nothing less will do.  The Bishops cannot be trusted to reform themselves.  They have lost the trust of the faithful.  They must humble themselves and become priests again, ready to truly serve, protect and listen to their flock.

The Pennsylvania Grand Jury report is now even more evidence that many in the hierarchy of the Church do not promote or demand chastity among themselves and the clergy and that they do not take seriously their role as fathers and the trust previously bestowed upon them by the faithful.

The laity are indignant.

We know many good, holy and chaste priests who are wounded by these attacks on children and on the priesthood. We need to see real contrition on the part of the bishops and many must take responsibility for knowing and looking the other way and resign. This culture of corruption, unaccountability, and cover-up is not the work of faithful shepherds and must end.

A man from the same parish wondered, “Can the USCCB survive this?  Wuerl's claim he was acting on the behalf of victims will be the rope they will hang him with.”

“Every single one of them should be defrocked and thrown in jail,” says Michael Lewis, who once worked for another diocese.  “Priests, Bishops, Cardinals, even Francis if he knew/was involved. I won't hold my breath. Pope Francis will issue some BS call for ‘mercy’ and sentence these people to ‘prayer and penance’ in some secluded retreat.”

“Sad to say, but I really don't think most of the bureaucracy cares about the wrongdoing,” continues Lewis.  “They care that it was exposed.”
“Pray, yes, but also ACT. Prayer alone ain't gonna do nothing for the MILLIONS of lives affected by psychological issues, alcoholism, addiction, divorce, sexual dysfunction, and on and on caused by the abuse.”

Another thundered, “Raze the USCCB to the ground and salt the soil upon which it stood, and never replicate it.”

Ellen Connolly, from the neighboring diocese of Arlington, Virginia, issued a plea to priests:

To all the rank and file parish priests out there: I implore you, encourage you, and urge you to speak up – loudly and clearly about the scandal.  We need to hear from you and know that you are angry, horrified, and prepared to defend each and everyone of us. We need to know that our dignity is worth more than your career.  When you avoid speaking on the scandal and stay silent it makes us wonder if one of us were abused, would you stay silent, too?

The silence is deafening.  It is so deafening that it will burst the eardrums of the faithful and by the time strong words come many won’t be able to hear.

Ellen explained the awkward position in which the avalanche of scandals has placed parents across the country:

My husband and I had to sit our 5 kids down and break the news to them about the scandal.  We wanted them to hear it from us first so that we could help them decipher the news, process the pain and have a clear picture of good and evil.