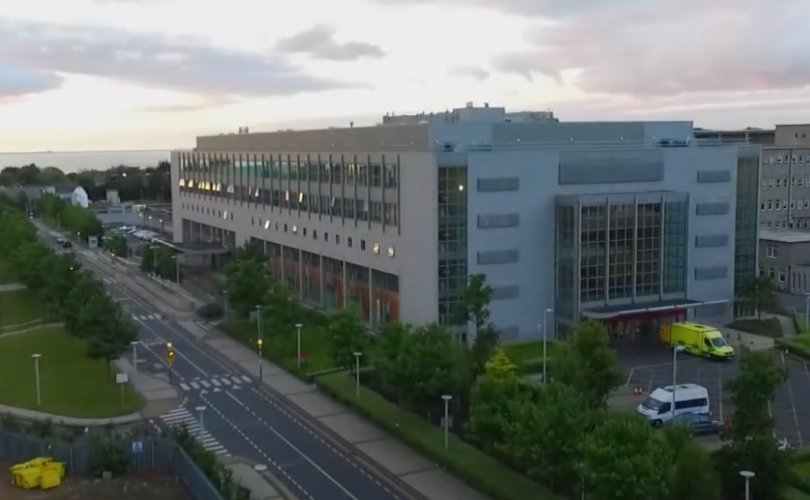 DUBLIN (LifeSiteNews) — An awkward silence has descended among bishops and religious in Ireland as €200 million worth of land gifted by a religious congregation in Dublin to a pro-abortion hospital group is once again the subject of media ire.

The Religious Sisters of Charity resigned their directorships and officially handed over their €200 million ($208 million U.S.) worth of shares in St. Vincent’s Healthcare Group for €1 on April 28th, with the new secular owners, St. Vincent’s Holdings CLG, intent on ridding the current hospital campus of any Catholic influence.

The greatest controversy lies in the fact a new maternity hospital to be built on the formerly Catholic site will perform abortions, an event foreseen by the nuns, the bishops and the Vatican before the deal was finalized.

Under the auspices of the new ‘Catholic-free’ hospital board, abortions, IVF, sterilizations and “gender-affirming therapies” will take place in the city’s wealthiest neighborhood, on land and in wards where generations of religious upheld the highest standards at the time in healthcare.

One would have thought secular Ireland would be thankful to the Sisters for the provision of such valuable assets, but instead we have had weeks of establishment conspiracy theorizing in Ireland, where paranoid politicians scrutinize the arrangement, searching for devious schemes by which the dreaded and long-demonized nuns might block their future plans to offer abortions on the site.

Alas, no such urge to maintain a Catholic medical ethic exists in the religious authorities who allowed this ownership transfer to proceed.

This is not simply a story of Irish nuns and bishops abandoning the unborn who will be killed or turning their back on the confused child who will be mutilated.

The Vatican is also implicated because the Congregation for Institutes of Consecrated Life and Societies of Apostolic Life authorized the transfer of ownership – the congregation had to be petitioned because the assets are worth well over the €3.5 million threshold requiring Rome’s seal of approval.

The sorry affair could have been stopped, however, by any number of our long-educated, resident Catholic leaders, be they the Superior of the Sisters of Charity, Sr. Patricia Lenihan, the then-Archbishop of Dublin, Dr. Diarmuid Martin (who gave the move his full backing), the current Archbishop of Dublin, Dermot Farrell (who remained silent), the Archbishop of Armagh and Primate of All-Ireland Eamon Martin (who wrote to the Holy See through the Papal Nuncio to express his support for the dastardly deal), or even the Papal Nuncio himself, Archbishop Jude Okolo, who should also know the basics of Catholic moral theology.

Archbishop Eamon Martin’s specious argument, that formal cooperation in evil doesn’t exist because the nun’s intended to transfer the land before Ireland’s constitutional ban on abortion was repealed in 2018, falls at the first hurdle, ignoring the fact that abortion was legal in certain circumstances since 2013, well before any sister had the stupefying thought of handing the hospital reigns over to those who would draw innocent blood.

If surprise is your overriding emotion at the reckless exploits of these shepherds and nuns, then sit tight. There’s tragically more.

The new Archbishop of Tuam in the west of Ireland more recently found the time for a hand-wringing exercise of marginally-less scandalous fare, attending a local memorial to lend credence to the nationally-held but libellous smear that some 800 babies were thrown in a septic tank by Bon Secours nuns in his diocese.

Congratulating would-be historian Catherine Corless, whose bare-faced untruths have tarnished the reputation of Irish nuns the world over, Archbishop Francis Duffy failed to remind all gathered that the state’s commission of investigation found no babies whatsoever were thrown in a septic tank, contrary to the historian’s popular narrative.

The commission’s worst claim in its 2019 report was that the burial chambers “did not provide for the dignified interment of human remains”, which did not stop Corless boldly reasserting to radio listeners a few days later that the babies’ remains are still “in a sewage tank, and they’re floating around the place…”

This perverse narrative of 800 babies being thrown in a septic tank is now a dogma of the Irish establishment, uttered as fact on chat shows where Corless is fêted and disinformation abounds.

Dislodging this myth from deep in the Irish psyche has proven almost impossible, given the few commentators and clergy who are willing to take a stand for the long-deceased Tuam nuns.

Today’s nuns and bishops don’t seem to realize that they can’t win unless they start talking about the harder issues. They prefer to go softly into the night.

Archbishop Duffy’s appearance at the memorial event was unsurprisingly seized on by Corless as the Church finally endorsing her tale of events.

“It’s a remarkable turnaround for us, and it will shift attitudes in the town, to know the Archbishop supports everything that can be done for the babies,” Corless maintained.

The Irish Independent article noted that Duffy previously claimed there was “unfinished business” concerning the burials, whereas Irish Catholics wonder when he, any clergy, or the remaining Bon Secours nuns will announce that the emperor has no clothes.

The pervading cowardice in Ireland, where the vast majority of Catholic leaders fear negative publicity from the media’s attack dogs, has paralyzed much of the diocesan Church, compounding the truly awful sex-abuse scandals and cover-ups with a finishing coat of managed decline.

Speaking with a top-ranking Irish bishop some weeks ago, I got the impression that his ill-informed idea that orthodox young seminarians and priests are only interested in daily Mass-goers said more about why his diocese is in free-fall than about the young priestly men whom I know.

His sentiment echoed that of Fr. Brendan Hoban, a founder of the modernist Association of Catholic Priests, who long ago told me orthodox young vocations are “not the sort of vocations we need,” and continued his ponderous crusade for women priests and Eucharistic services.

Fr. Hoban’s theology, along with many dioceses and orders, is dying out, but few of his generation are willing to admit their heterodox ideas are to blame.

The Dominicans, the FSSP, the Institute of Christ the King, other new orders and many faithful diocesan priests, and even the brave seminarians still persevering in the once-burgeoning Maynooth, are all proving that only the true Faith can bear the good fruit of souls converted and new vocations.

Whilst the modernist edifice is crumbling around Ireland, souls are still being brought to life, because God is thankfully rebuilding His Church.