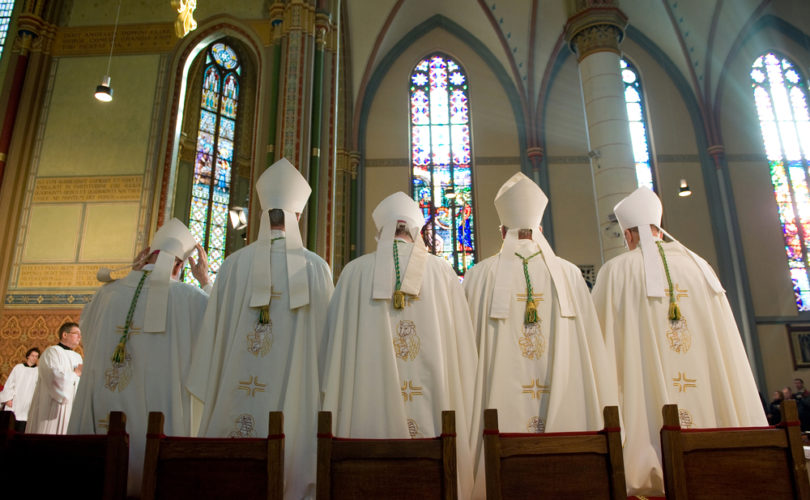 April 2, 2019 (LifeSiteNews) – Dietrich von Hildebrand once wrote: “It is sad enough when people lose their faith and leave the Church; but it is much worse when those who in reality have lost their faith remain within the Church and . . . are giving to Christian revelation the interpretation that suits ‘modern man.’”

Bishops like Peter Henrici, Walter Kasper, Reinhard Marx, Lorenzo Baldisseri, Óscar Andrés Rodríguez Maradiaga, and Bruno Forte embrace contemporary sociological, psychological, and philosophical theories that, in their view, “necessitate” major changes in Catholic doctrine or practice. They seem unaware—or worse, unconcerned—that there is such a thing as faith—radical, saving faith. Believers in Christ are willing to die for the least article of the Apostle’s Creed, as the faithful at the time of the Arian crisis were willing to lose everything rather than allow their Lord and God to be insulted by the tainted rationalism of their opponents.

The theological virtue of faith enables one not only to know the truth of what God has revealed but also to savor it, and thus to come to a deeper understanding of the relationship of the mysteries to one another and to their singular origin, the Blessed Trinity. This means, in addition, an ongoing adaptation of the mind to the mysteries as expressed in the traditional dogmatic formulas. Note well: it is not the mysteries that need to be adapted to the human mind (as the Modernists would have it), but rather the human mind that must conform itself to the mysteries, submitting to their demands, humbly bearing their yoke. This is the narrow path trodden by the saints in their pilgrimage to the beatific vision.

What Henrici & Co. exemplify is the triumph of modern rationalism, which will not submit to a predetermined external rule and allow it to measure the mind in a lifelong tutelage. In them we see the attitude of “we know better” that will finally turn upon Jesus Christ as it has already turned upon His Church, and will reject Him as it has already rejected her.

This, I believe, is what we are seeing in the Kasper phenomenon: without it being said explicitly, the real message of the past several Synods in Rome is that Modern Man, having “come of age,” no longer needs the severe and restrictive teaching of Jesus Christ, which (to make matters worse) was embellished and encrusted with unreasonable demands by the medieval misogynistic and gamophobic Church. Modern man lives for liberty, independent judgment, and self-expression, and he will have it, regardless of what the Gospel and Catholic doctrine may say. Far from being heroic, adherence to Christ’s “narrow way” is destructive of personality, freedom, human rights, and maximal self-expression.

Needless to say, this is a monumental lie, worthy of Satan himself, who seems to have many friends in high places these days. Even Pope Paul VI, whose disastrous liturgical reform is, so to speak, “the gift that keeps on giving” in the postconciliar crisis, was not benighted enough to overlook the entrance of “the smoke of Satan,” the spirit of non serviam, into the Church.

The Catechism of the Catholic Church was intended to be a “sure norm” for knowing and transmitting the Faith. The words “sure norm” are those of Pope John Paul II, in the Apostolic Constitution by which he promulgated the Catechism. It should surely disturb us that John Paul II’s successor Francis felt free to modify the content of the same Catechism to make it say that which no one in the Catholic tradition has ever said before—indeed, to say that which is contrary to both Testaments of Sacred Scripture: that the death penalty is “per se contrary to the Gospel,” “inadmissible,” perhaps even “intrinsically evil.” Even John Paul II, who was personally opposed to the use of the death penalty, knew full well that he could only say that it was prudentially ill-advised or unnecessary—not that it was something to be categorically excluded or condemned in principle.

How great an irony of our times, then, that the fabled “sure norm” of the Catechism has itself been taken hostage by the Modernist proponents of a falsely-conceived “development of doctrine.”

Wisely did the great Catholic convert Orestes Brownson write in July of 1846:

The Church is not here to follow the spirit of the age, but to control and direct it, often to struggle against it. They do her the greatest disservice who seek to disown her glorious past, and to modify her as far as possible, so as to adapt her to prevailing methods of thought and feeling. It is her zealous but mistaken friends, who, guided by a short-sighted policy, and taking counsel of the world around them, seek, as they express it, to liberalize her, to bring her more into harmony with the spirit of the age, from whom we, as good Catholics, should always pray, Libera nos, Domine!