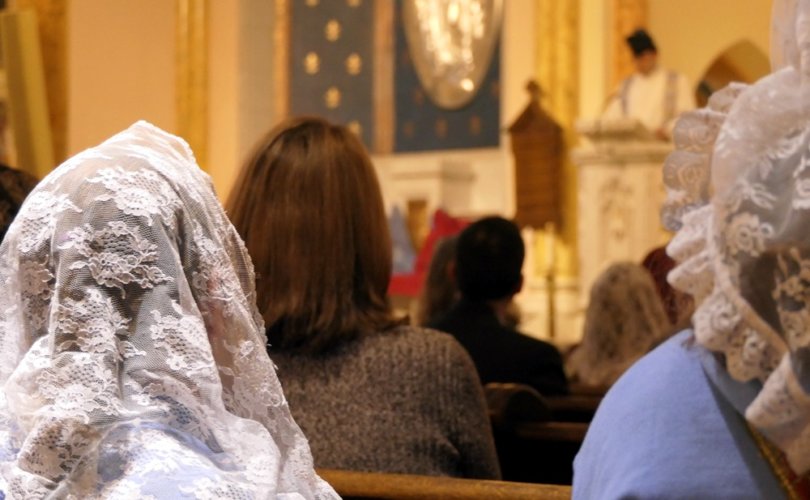 November 6, 2019 (LifeSiteNews) – A certain Zita Ballinger Fletcher, writing in the National ‘Catholic’ Reporter (a notoriously not-very-Catholic publication) has written an unintentionally hilarious article attacking the traditional Mass. It alternates between statements of the obvious, presented as though they were horrifying revelations — the Latin Mass is said in Latin! The priest celebrates facing away from the people! — with bizarre non sequiturs: this form of the Mass is sexist, oppressive, and clericalist.

And worst of all, people aren’t allowed to wear red.

Fletcher is worried about division in the Church — at least, this is presumably the point of talking about the Latin Mass creating ‘sects’ — but it is she, not Catholics attached to the ancient liturgical tradition, who is causing divisions with this article. Her embittered and rather personal attack contrasts very much with the attitude of her victims. Traditional Catholics do not fill their leisure hours attacking the character of Catholics who attend the ‘Ordinary Form’. They commonly share churches and parishes with them, nearly always as the junior partner, and want nothing but to live in peace and charity. We can have theological discussions without thinking our opponents are bad people, but this is a trick Fletcher doesn’t seem to have mastered.

Although the article is itself absurd in many ways, the link Fletcher strives to establish between the traditional Latin Mass and clericalism is a familiar enough theme to warrant a response. I leave aside the question of sexism, which seems more an angry accusation against the women who attend the traditional Mass than against the men. Fletcher seems scared of the ladies wearing veils in church and writes of a female friend: ‘I still don’t understand why she wanted to associate with that group, or why she decided to give in to oppression.’ Shrieking at women that they are self-hating misogynists is a really bad look.

Fletcher does not actually explain the connection between the ancient Latin Mass and clericalism; it seems to come down to an association of ideas. The priest wears nice vestments, he has his back to the people, he prays in Latin, and — whoosh! — he has somehow acquired power. This liturgy ‘places all power in the hands of the priest’; it is used to ‘wield control over believers’. Is it a magic spell? It certainly sounds like it. The altar rail, Fletcher tells us, is ‘a barrier that gives him privileges’. How does it do that? Like a magic wand?

At one point she writes that ‘the priest is at the centre of the spectacle’. Perhaps this is how she thinks it works. But isn’t the priest at the centre of any celebration of Mass? It has often been pointed out that the fact that, after the liturgical reform, the priest can look at the people and engage with them, with eye-contact, ex tempore prayers, and informal asides, means that the Ordinary Form is far more affected by the personality of the priest than the Extraordinary Form. Pope Benedict made this point about the celebration of Mass facing the people in his The Spirit of the Liturgy. The temptation for a priest who has personal charisma to use that to draw people in can be powerful in the context of the Novus Ordo. This is problematic because the priest’s personality can obscure the message of the liturgy itself. It could even, in extreme cases, be part of a personality cult. A priest who celebrates anonymously, using only the words of the liturgy, facing away from the congregation, and wearing formal vestments that any other priest in the parish might wear is in less danger here.

Many of Fletcher’s claims are comical. She says that when they receive Holy Communion, the people kneel at the priest’s feet. To whom, then, does the priest kneel when he genuflects before so much as picking up the Consecrated Host in the Traditional Mass? To whom, again, does he make repeated confession of his sinfulness, a far more prominent feature of the older Mass than of the newer? It is not a human being who is worshipped in the Mass, but God.

Even her observation about people kneeling at Mass is bizarre. She asserts, with apparent horror, ‘all the people inside the church are expected to kneel on cue at various points’. Are there not rubrics for the laity in the Ordinary Form? As a matter of fact, these are more formalised and demanding than those in the Traditional Mass, which are no more than local customs. People are far more likely to find themselves being corralled into actions with which they are not entirely comfortable, whether it be shaking hands with an overly friendly neighbour or going up to Communion, at the Ordinary Form.

And what is this about not being allowed to wear red at Mass? I confess I am completely baffled. The most charitable interpretation I can give is that with this Fletcher has, as with so many things, got the wrong end of the stick, but of what could have been the source of this particular misconception I have no idea.