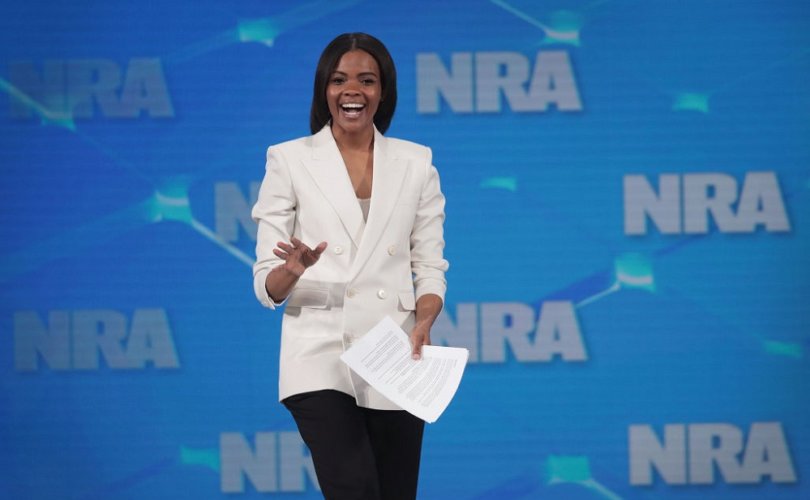 August 31, 2020 (LifeSiteNews) — Candace Owens exploded onto the conservative media scene in 2017, and many of us were unsure of what to think of her. Known primarily for her pro-Trump commentary and lauded by fringe figures such as Milo Yiannopoulos and Mike Cernovich, Owens was first an anti-Trump progressive — until, according to her account of what happened, she was doxxed by progressives over her comments on the Gamergate scandal. Later in 2017, she launched Red Pill Black, an initiative to promote black conservatism in America. Two months after that, Charlie Kirk of Turning Point USA announced that Owens had been hired as a director for urban engagement.

The following year, Owens registered as a Republican, and her punditry was lauded by Kanye West and President Donald Trump. Her commentary as a conservative was as incendiary as her previous progressive profile, and rolling controversies and campus conflicts elevated Owens as one of Trumpland’s rising stars. Since then, she began Blexit, a movement for black and Latino Americans leaving the Democratic Party; launched The Candace Owens Show on PragerU’s YouTube channel; and wrote a memoir scheduled for release in September. In 2019, she married George Farmer, a young British conservative and the son of a member of the House of Lords. These days, she constantly makes the news as a strident critic of the Black Lives Matter Movement.

Initially, Owens was ambivalent about abortion even while coming around to other conservative points of view. In an interview with Dave Rubin, she stated that she simply hadn’t made up her mind on the issue yet and would describe her thinking on abortion. Her colleague Charlie Kirk is pro-life, and Kanye West has taken a public stance against abortion as well, but Owens took her time exploring the issue. She did, however, use her PragerU show to interview pro-life activists such as Lila Rose, engaging them in conversation on issues of life and sexuality and sharing her own experiences growing up. The fact that she was evolving was clear.

The first definitive anti-abortion statement from Owens that I noticed was a tweet in May of last year: “Abortion is an extermination. It was the founder of Planned Parenthood who said she wanted to ‘exterminate’ black babies like weeds. It is the Republicans that are fighting for black babies to be born. I’m immune to racist Democrat linguistic tricks. It’s murder, not choice.” Then, three days ago, Owens posted an announcement to Instagram: she was formally coming out as pro-life. It was a powerful summary of how young women are lied to — and how she realized the truth:

I remember the first time I learned about abortion in school. “It’s a clump of cells until after 3 months” said my obtuse gym teacher turned health instructor.

Fast forward to more than a decade later to my 10 week scan, and I will never forget the feelings I experienced.

I was amazed that our baby already had arms and legs, hands and feet and was dancing around inside me. I was overcome by an inexorable sense of love followed by the powerful realization that I would do anything and everything to protect my unborn child.

But I was mostly astonished that all those years ago in high school, I was lied to. I was brainwashed into believing that it was my body, and therefore, simply, my choice.

Today it’s become fashionable for narcissistic celebrities to perpetuate such brainwash amongst their fans. Like @mileycyrus, posing half-naked with her tongue out over a cake that reads “abortion”. Like @jameelajamilofficial, tweeting to scores of vulnerable young girls about how “proud” she is of an earlier abortion from her teen years.

Years ago, I would have thought these women were heroic feminists. Today I know that they are anything but.

And so as I move into this next chapter of my life I want to say this: To all of the young girls wo [sic] have vocally supported abortion — you are allowed to change your mind. To all the young women who made uninformed decisions to go through with abortions: you are not “murderers” and you are not automatically disqualified from being pro-life. You too can have a change of heart. Education followed by transformation is one of life’s greatest offerings.

These past 5.5 months have been a whirlwind. A viral video with over 200 million views, comedians threatening to physically assault me, adult men degrading me because they disagree with my viewpoints on George Floyd, while others have accused me of not “showing up”, not being invited, or not caring enough to jump into the perpetual protest scene.

It is such a relief to finally share the truth. Life is a miracle. Life is sacred. And when women carry life, we get to become the keepers of some of the Universe’s greatest secrets: beginnings.

Candace Owens has done the pro-life movement a great service by articulating so beautifully the miracle of motherhood and the infinite wonder of a child growing in the womb. With her millions of followers, this message will reach many who desperately need to hear this message, and perhaps some little babies just like hers will remain safe in their mothers’ wombs because of Owens’s public testimony describing her change of heart. I hope she will continue to discuss the issue of abortion on her platforms and on her podcast. The abortion industry survives on lies, and the more people there are telling the truth, the harder it is for them to hide what they are doing: destroying tiny babies like the one growing safely beneath Candace Owens’s heart.