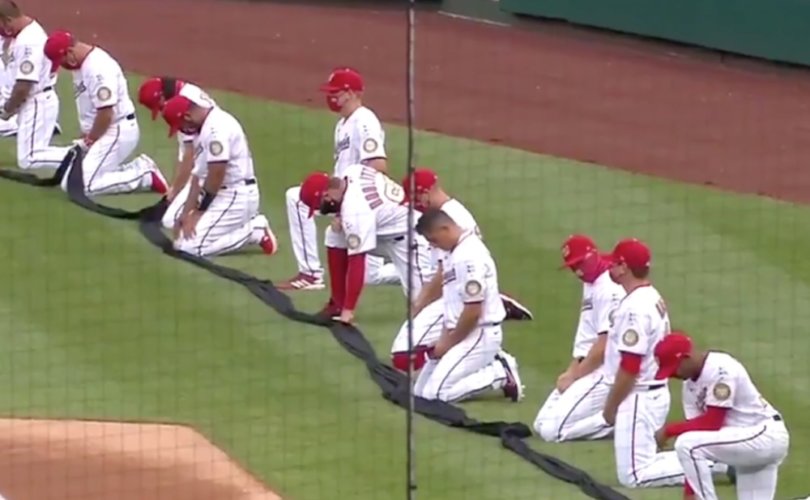 WASHINGTON, D.C., August 10, 2020 (LifeSiteNews) – We have witnessed an  unthinkable degradation: As the whole country watched, three Marxist women forced nearly every Major League Baseball player to kneel before them and their strange countercultural creed.

By bending their knees, these men have paid homage not to civil rights, but to Marxism; to the destruction of the nuclear family; to transgender and gay political power squashing not just religious liberty, but religion itself; to the defunding of police; and to the erasure of western history and culture.

We now watch American geldings romp around out on the ballfield.

Many of these men no doubt thought they were doing a good thing by taking a knee before their games, but as Rush Limbaugh has noted, their actions cannot be justified by claiming ignorance. “All you gotta do is go to their website, and there you will find that [BLM is] a proud pro-Marxist, anti-American organization.”

“And yet every professional sports league believes they’re getting into bed with a civil rights organization,” observed Limbaugh. “It’s the most amazing thing.”

“The Black Lives Matter organization has never repudiated nor denied its manifesto and practices, which are committed to Marxism (which includes atheism), a rewriting of history, hate for anyone who disagrees with them, and anti-Semitism,” wrote Rabbi Michael Barclay in a PJ Media commentary titled, “I'm Boycotting Professional Sports Leagues That Endorse Black Lives Matter, And You Should, Too.”

“They call for the destruction of Israel, which they call an ‘apartheid state’ that ‘practices genocide,’” he explained. “Many of their leaders, such as Melina Abdullah, the head of BLM Los Angeles, claim Louis Farrakhan as their spiritual advisor…a man whose hate-filled dogma has for decades wanted every Jew ‘exterminated.’ They consciously have chosen locations for their ‘protests’ that are Jewish neighborhoods so that the ensuing riots would cause the residents to ‘feel pain.’”

“We now live in an environment where bullies filled with hate have the ability to dictate practices,” continued Rabbi Barclay. “Where the loudest shout down what is right and righteous to push people to surrender to their dogma. And their hate has now pushed itself into acceptance on an institutional level.”

None of this should be surprising. Major League Baseball (MLB) was already poised to make this “social justice” leap.

Last year, every single MLB team hosted a “Pride Night” except for the Houston Astros and Texas Rangers, although both of those teams have held homosexual “pride” events previously.

Teams have routinely posted pictures of these events on social media, treating “pride” as just another theme night, yet they simultaneously wrap these events in a mantle of social justice, hyping their promotion of “diversity” and “inclusion.”

The gaying of professional baseball is pretty much complete, so social justice demanded new and greater fealty.

“Literally, folks, the NFL, Major League Baseball, and the NBA are in bed with Black Lives Matter,” Limbaugh emphasized during his radio show. “Black Lives Matter is an acknowledged, proud, not hiding it, Marxist, anti-American organization. And professional sports is in bed with it.”

Out of the 750 or so major league players on team rosters at the start of the season, only one – the San Francisco Giants’ Sam Coonrod – refused to kneel, citing his Christian faith.

“I’m just a Christian. I believe I can’t kneel before anything but God, Jesus Christ,” he told reporters after the game.

Three Marxist, queer-affirming women have stolen professional sports from middle America, and the league, team owners, and players gladly handed themselves over.