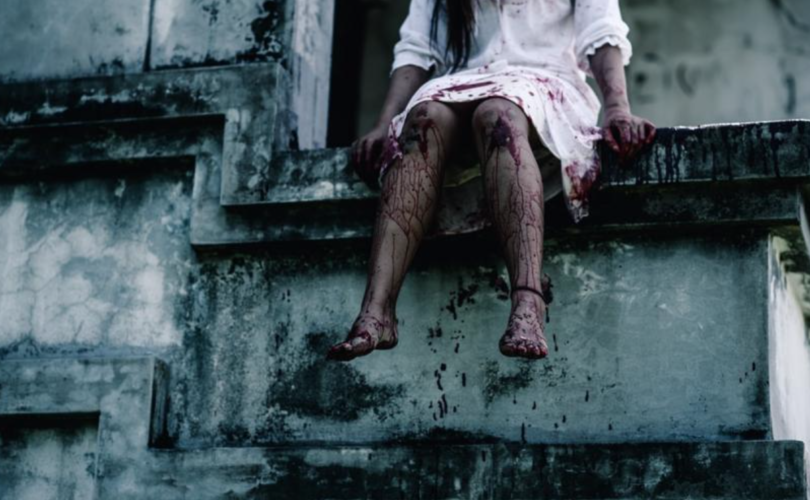 February 6, 2018 (LifeSiteNews) – Back in 1997, I was browsing a bookshop and came upon a book that shocked and horrified me. A feminist theologian had written a book in which she argued that the two greatest “crosses” Catholic women must bear are—you guessed it—the Catholic Church’s opposition to women’s ordination and its opposition to abortion. I could hardly believe that blasphemy had reached this level, but there was no denying my senses, as much as I might have wished myself caught in a nightmare.

Then, not long after, someone told me of a woman in Canada who spoke of abortion as “sacramental.” The abuse of language is nothing short of Luciferian. In reality, there is nothing sacred or sanctifying about sin, destruction of life and self-destruction, just as there is nothing beautiful in the devil after his rebellion. Sacraments are about bringing life to man. Abortion is more rightly called the anti-sacrament par excellence, since it deprives the unborn human of his or her opportunity to be brought to life, naturally and supernaturally.

“The devil is the ape of God,” runs an old saying. The devil really does have an organized religion—organized at least to the point of bringing the enemies of Christ into the most rigid and efficient political, psychological, and cultural structures he can manage to devise with his super-human intelligence. Everything done by the Catholic Church is parodied by the “church” of the devil, and in this parody we find an explanation of the blasphemies of the people mentioned above, whose use of the words “cross” and “sacrament” are nothing less than a frontal assault on the very holiness and mercy of God.

The only way God’s infinite mercy can be turned away is by a direct affront to it: “Amen I say to you, that all sins shall be forgiven unto the sons of men, and the blasphemies wherewith they shall blaspheme: but he that shall blaspheme against the Holy Ghost, shall never have forgiveness, but shall be guilty of an everlasting sin” (Mk 3:28–29). If people repent of their sins—any sins whatsoever!—and seek God’s mercy, He will give it to them, though not without a just punishment, in this life or the next. But if people directly offend against the divine mercy exhibited or communicated in the order of creation and the higher order of redemption, and they go to their grave in this state of rebellion against the Holy Spirit, how can He help them? By showing them mercy? That is the very gift they have scorned.

It is the hard truth that people choose hell for themselves; and I would add further that this hell is always of the sinner’s own making. His prison is his own mind, and his punishment is to be stuck with his dark, twisted ego for eternity. That is hell enough, before we even talk about flames or any of the masterfully imagined torments of Dante’s Inferno. I often think of what Lewis says in The Great Divorce: hell is like a suburb where the houses keep getting further and further apart, their residents more and more isolated as time goes on. And could we not connect this image with Ratzinger’s conviction that hell is already irrupting into our modern world, seeping in through the cracks, as it were? The childfree suburbs of earth, evacuated by contraception and abortion, are the precursors of the God-free suburbs of Hades, indwelt by vacuity.

Abortion is the crime of people who, at root, hate themselves and despair of life’s meaning. If people loved who they are and saw their lives as having meaning, they would welcome every new life as a continuation of what they love, a further verification of that immense meaningfulness of life, a harbinger of hope, a down payment on the future. The crime of extinguishing and discarding the child is the absolute nadir, the complete ebb, of life and existence; it is the death of the social instinct and of the human heart itself, the suicide of common sense, the brutal murder of compassion and mercy, a sick parody of love. Seen in this way it is the most evil act possible, since it is like murdering innocence, life, God, and the future, all at once. Abortion is both literally and symbolically the final stage of metaphysical decadence and loss of meaning.

Hence, our fight against abortion and all that leads to it and flows from it must have not only a practical, political side, but a speculative side as well. Christians now more than ever must study and internalize the speculative roots of their heritage as well as the multitude of modern errors that undermine this heritage, this “gospel of life.” We would be naive to think that philosophy, that abstract and rarefied discipline, has little or nothing to do with our present-day culture of death. On the contrary, it has everything to do with it. In the words of Erik von Kuehnelt-Leddihn:

The philosopher is able to engage in very dangerous games with reality, games played by his shadowy colleagues, gnostics, alchemists, and magi, verbal games in the main but which easily degenerate through pride and through the wrong combination into distortions of reality. And if ideologies are such arrogant and evil combinations, it is because they are prepared in the philosophical hell’s kitchen. (Quoted in Thomas Molnar, Decline of the Intellectual, Preface to the New Edition, ix)

We know from moral theology that there are some sins worse in kind than abortion—for example, profaning the Holy Eucharist or committing suicide. But as St. Thomas often says, there is nothing to prevent a sin from being the worst in a certain respect, even if it is not the worst absolutely speaking. No crime can be more abominable than abortion in at least this way: it is so utterly contrary to the fundamental natural good of life and to the deep-seated affection that human beings feel towards fellow humans, especially the innocent and helpless. There can be no satisfactory excuse for this crime; everyone knows that a pregnant woman is, as the old saying went, “a woman with child,” that the abdomen is rounded because a child is in the womb growing and squirming, that from the moment of conception there is a new human being in addition to the mother. It is impossible not to know this if one still enjoys the use of reason.

Which leads to a frightening conclusion: the immense prevalence of abortion in the modern world is a sign of the utmost spiritual darkness having descended upon mankind, a darkness unlike any that history has ever witnessed. For abortion to be “accepted” (let alone chosen), a person’s intellect, indeed his or her entire soul, must be drifting away from reality, from self-knowledge, love for life, basic humanity—even the principle of non-contradiction, and with it, the possibility of logical thought. Contentions of man against man are one thing: as long as human beings fall prey to avarice, libido dominandi, and exaggerated nationalism, wars will arise and be fought. But a technologically refined and lucrative warfare against unborn children? There is nothing more depraved, nothing more profoundly contrary to the very nature of man. Abortion undermines that love of offspring written by nature upon the human heart and puts in its place an empty negation, in fact a murderous negation, of being; it turns a heart of flesh into a heart of stone.

This is why Cardinal Pell could say: “Abortion corrupts everything it touches—law, medicine, and the whole concept of human rights.” This it does because it corrupts the human heart first. That is why those who perform, counsel, or undergo abortions desperately need our prayers and penance: there is nothing they need more than the sacraments and the life of grace, the pardon and peace of the Lord.

Adapted from an article that first appeared at the Truth and Charity Forum of Human Life International, www.hli.org.