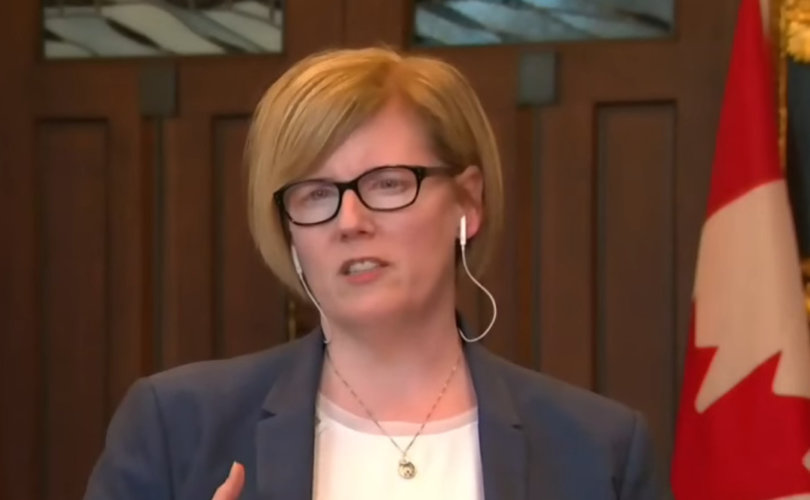 (LifeSiteNews) — Justin Trudeau’s minister of disability inclusion has condemned the recent suggestion of Dr. Louis Roy of Quebec’s College of Physicians that euthanasia should be an option for infants below the age of one “with severe deformities and very serious syndromes for which the chances of survival are virtually nil, and which will cause so much pain that a decision must be made not to allow the child to suffer.”

While speaking to CBC Radio’s “The House,” Minister Carla Qualtrough stated that while she does not speak for the entire Trudeau government, “there is no world where I would accept that.” Further, she stated: “I find that completely shocking and unacceptable. I would never support going down that road.” Considering the Trudeau government’s resolute commitment to ignoring the pleas of the disability and mental health community on so-called “safeguards” for assisted suicide, it is pleasantly surprising that a minister in this government could be “shocked” by anything at all.

Qualtrough herself is legally blind and admitted that she has been disturbed by the growing volume of reports that people with disabilities are opting for assisted suicide because they cannot find the care and support that they need. “Working with the disability community and hearing very regularly that people’s options around MAID are being driven by a lack of social supports is devastating,” she said. As the CBC—which championed the legalization of assisted suicide—bluntly put it: “Qualtrough said it should not be easier to access a medically assisted death than to get a wheelchair — but it is.”

— Article continues below Petition —
The Quebec College of Physicians must not be allowed murder infants
Show Petition Text
4918 have signed the petition.
Let's get to 5000!
Thank you for signing this petition!
Add your signature:
Show Petition Text

RELATED: Canadian Senate to debate yet another expansion of nation’s assisted suicide laws

The state broadcaster also admits what many opponents of the new suicide regime have been saying for years—that “the federal government was warned by many disability advocates of the risk of disabled people seeking assisted deaths because inadequate supports left them feeling they had no other options.” Inclusion Canada, a group that “works on behalf of Canadians with intellectual disabilities,” called the recent changes to widen eligibility for MAiD their “worst nightmare” and a “moral affront.”

Minister Qualtrough told the CBC that she now hopes the recommendations form the parliamentary committee on Canada’s MAiD regime, set to come out next February, will have suggestions—this after disability advocates have had their input steadily ignored. “I’m very concerned about the messages that people are getting from this, that somehow a life lived with disability is worse than death,” she said. “It’s not what I believe.” It is, however, the message her government has been sending with its stance on assisted suicide and euthanasia.

Qualtrough is now attempting to champion a bill that provides benefits for disabled Canadians with low incomes of working age—but other parliamentarians have pointed out that the Liberals have been promising this without delivering for several years and that the legislation has little in the way of details. If the bill passes, she noted, it will take at least another year before any benefits actually reach Canadians struggling with a series of awful choices. Disabled Canadians are choosing to die by suicide because Qualtrough’s government has failed them—and they were consistently warned by advocates that the scenario we are currently witnessing would play out.

Conservative leader Pierre Poilievre has now come out to condemn expanding Canada’s euthanasia regime to those suffering from mental illness, and a wave of scorching international coverage has prompted even the reluctant Canadian media to admit that things have gone horribly wrong. Prime Minister Justin Trudeau has thus far remained silent about the trend of impoverished Canadians killing themselves with state assistance because they cannot afford to live, and Qualtrough took pains to emphasize that she does not speak for all Liberals.

What has become eminently clear is that the Liberals, in turn, do not speak for—or stand for—vulnerable Canadians, either. Their warnings were not heeded, and now they are dying.