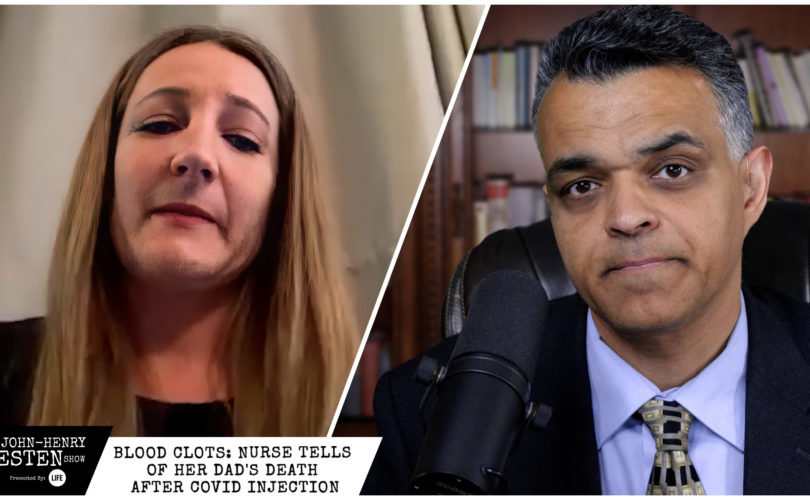 June 8, 2021 (LifeSiteNews) — In this episode of The John-Henry Westen Show, I speak with Casandra Yoder, a nurse whose father experienced adverse reactions and later died after taking the Johnson & Johnson coronavirus vaccine. She describes how after staying at the hospital for several days in April he eventually passed away, and she links his death directly to the jab.

Yoder says that even though in November 2020 her dad had been diagnosed with minimal symptoms of the virus and recovered, he took the Johnson & Johnson injection after “he had received permission by his primary care provider.” His daughter tells me that he was pressured to take it “by the propaganda around COVID.”

Many doctors and scientific experts, including the former vice president of Pfizer, Dr. Michael Yeadon, have warned that taking the so-called vaccine after also having underwent the virus is even more dangerous and deadly than if you hadn’t had COVID before.

In fact, Yoder, who is a nurse, says that she believes this to be true after reading scientific research that says “there’s an increased risk” of adverse events from the shot for those who have already had coronavirus.

Yoder’s father experienced similar side effects that have been reported by some news media and the VAERS database. She says that two weeks after getting the shot, her dad was taken to the hospital with breathing problems, and was eventually put into a medically induced coma.

The doctors then discovered that he had a severe left side stroke, possibly caused by blood clots. Yoder tells me that the entire family was “expecting him to wake up,” but he sadly never did.

Casandra Yoder is telling this story so that her father “won’t just be another number.” She wishes to show that vaccine injuries and adverse reaction are real, and that this testimony “can save somebody else’s life from going through what we’ve had to go through.”