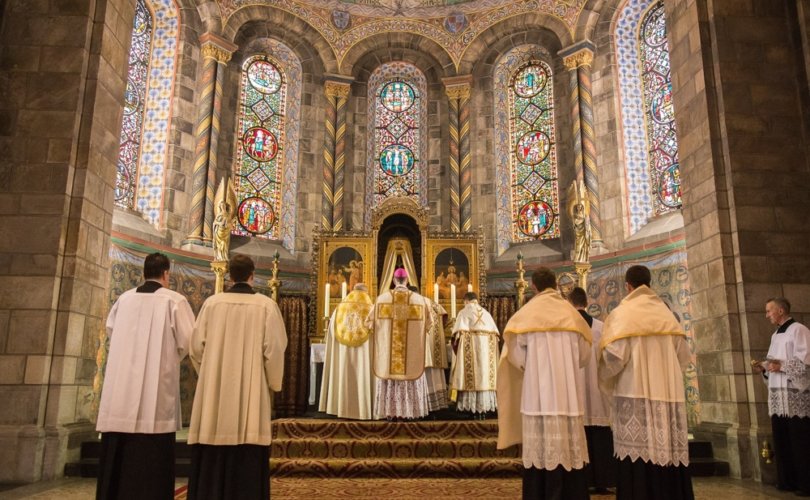 December 10, 2018 (LifeSiteNews) – Peter A. Kwasniewski’s fifth outing, Tradition & Sanity: Conversations & Dialogues of a Postconciliar Exile, is a delicious gingerbread of a book.

The kind of gingerbread I’m thinking here is the spicy Polish cake with dark chocolate melted into it and nuggets of candied stem ginger appearing here and there. Kwasniewski’s writing style is, as always, rich and strong. In this new volume about Catholic tradition, he adds some heat via fictional dialogues between monks that make no secret of what the writer thinks of Pope Francis’ project to blight the liturgical and doctrinal recovery of the Church.

Tradition & Sanity is a collection of 18 pieces, many of them interviews with the author by Catholic journalists about material from his previous works Resurgent in the Midst of Crisis: Sacred Liturgy, the Traditional Latin Mass, and Renewal in the Church and Noble Beauty, Transcendent Holiness: Why the Modern Age Needs the Mass of Ages. For this reason, Tradition & Sanity is somewhat of a companion volume to those works.

But only somewhat. Go ahead and read the book if you haven’t read its older brothers yet: the Preface provides a nice summary of the author’s overall thesis: that 63 years of liturgical and doctrinal tinkering with Catholic Tradition have been disastrous for the Church. Kwasniewski likens the damage to “the aftermath of a nuclear war” and the work to recover Tradition to “monks in the Dark Ages rebuilding a monastery for the third or fourth time from the ruins left behind by the latest barbarian hordes.”

This is not a book that will convert people who like guitar masses and whose admiration for Pope Francis is in direct proportion to their dislike for doctrines they hope will change. No backslapper, Kwasniewski expresses himself rather too forcefully for those who go to Mass for an emotional lift, a bit of a sing-song, and a chat in the parking lot afterwards. This book is for those who already believe God is asking more of us in our worship of Him. If Kwasniewski is correct, there are a growing number of these Catholics, and if you know some, his book would make them a good Christmas present.

To their credit, the journalists whose interviews appear here, themselves traditionalists sympathetic to Kwasniewski’s ideas, do throw some tough questions at him. Kwasniewski also introduces composite portraits of people who regularly buttonhole him after Mass to argue such thorny topics as obedience to the pope, the value of the Novus Ordo, and what makes a liturgical change a “rupture” instead of a “development.”

In fact, Kwasniewski and his avatars seem to spend most of the book fighting enemy ideas, which is partly why the lumps of stem ginger – or the fictional dialogues between agreeing monks – are so much fun. I am acquainted with some traditionalist monks, so I was tempted to fit faces to the names “Brother Barsanuphius,” “Father Remigius,” and the like, although I cannot imagine any monk speaking so frankly to female married me. Kwasniewski’s fictional monks are very learned, very devout, and very unhappy with the novelties and discouragements introduced to the Church by the real Pope Francis and the fictional future Francis II. They do, however, also have a sense of humor, as does Kwasniewski, particularly when anticipating the canonization of a certain blogger-priest.

Quite apart from the eye-opening opinions of his fictional monks – one calls the sovereign pontiff “our yerba mate aficionado” – Kwasniewski makes some bold moves by including a panel discussion with a Cistercian, Pater Edmund Waldstein, who makes a strong argument against the author for liturgical simplification and also by laying some of the blame for the current liturgical decadence on Pius XII.

Addressing Pius XII’s shortsighted meddling with the Holy Week liturgies (results promulgated in 1955, hence the number 63 in paragraph four, above) is helpful because it moves the conversation out of the rather stale air of the 1960s and away from the much-maligned Second Vatican Council. Both friends and foes of Catholic tradition have a tendency to cite Vatican II without reading its documents; Kwasniewski sets them right, not only by showing that Sacrosanctam consilium never ordered this second Elizabethan “stripping of the altars,” but also by recognizing that Pius XII abused his papal office by tinkering where he had no right to tinker. This was the precedent that led to liturgical disaster.

A word of censure to ginger up this sweet review: there is no index, and there ought to be. Compiling an index is a chore, I know, but there is no excuse for leaving one out in a work aimed at helping Catholics cope with the current liturgical and doctrinal crisis.

If Kwasniewski has taken on the surplice of the liturgical confessor Michael Davies, whose works sustained the new liturgical movement in its colicky infancy, then he should make his work as accessible as he can. Because naturally he cannot and should not “dumb down” his subject, Kwasniewski owes it to his readers to include all the aids to reading – and citing – that he can. That means an index and subtitles when he switches from genre (interviews) to genre (fictional dialogues) within a single work.