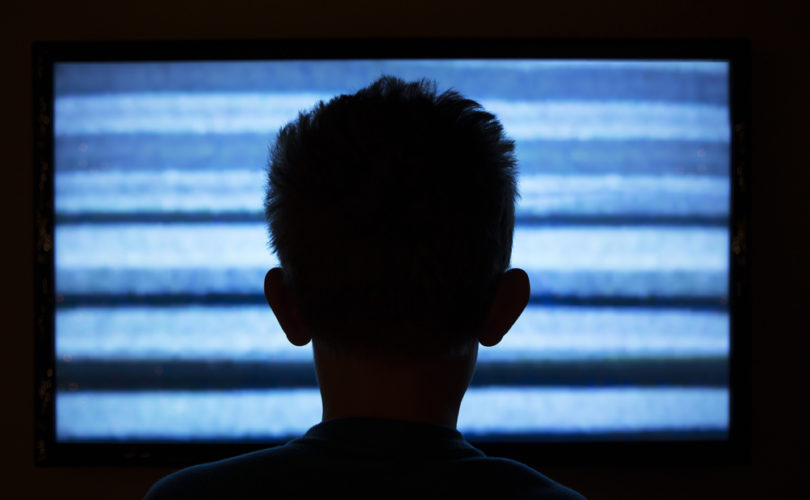 Boys sit in their homes behind computer screens feeling as though they are conquerors, protectors, champions, fighters without even a drop of sweat exiting their bodies.

A few years ago, we were visiting my husband’s family and he was bonding with his younger brother by playing video games, which they played for endless hours. Then they came up from the basement for dinner. The children and I were both happy to finally have Doug back from the trance he had been in, and that he had some special time with his brother.

After dinner Doug said, “Hey we’re going to go back and finish out the game. We are just about ready to conquer the world.” My cynicism kicked into full gear and I replied as he was heading down the basement stairs, “Don’t forget that when you sit behind a TV screen all day, you do nothing to conquer the world. You get the feeling of conquering the world while doing nothing for it.”

My husband laughed, knowing I was half kidding, but also knowing just how true my statement was in a larger sense.

This video-game-social-media-addicted culture is settling for the counterfeit without even knowing it. Boys sit in their homes behind computer screens feeling as though they are conquerors, protectors, champions, fighters, great sportsman, and even musicians, without even a drop of sweat exiting their bodies or without ever touching an actual football or instrument.

Seeing a naked woman should take work. It should require meeting her in person, getting to know her, asking her on a date, buying her ice-cream, meeting her family, sacrificing for her, becoming vulnerable, asking her to marry you and getting married.

Are we becoming a counterfeit culture?

Conquering the world means getting off the couch, walking out the doors and having the sun beat down on your face while you literally do something to conquer the world. One cannot conquer a world without engaging the people within it.

Seeing a naked woman should take work. It should require meeting her in person, getting to know her, asking her on a date, buying her ice-cream, meeting her family, sacrificing for her, becoming vulnerable, asking her to marry you and getting married. And, your nakedness with one another should be a time without shame, secrecy, or deception because you have committed to this person and this person only to love them fully, totally, and faithfully.

Having friends likewise should include an actual face-to-face meeting or, at the simplest, a voice-to-voice conversation that lasts more than the effort it takes to write 140 characters or a short post. Friendship requires a time-testing element where there is a demand for trustworthiness and honesty. Friendship demands a commitment to being inconvenienced: like when a friend needs to talk to you in the middle of the night and you wake from a much needed and desired sleep to take the call; or, when a friend is doing something wrong and you have to speak an uncomfortable truth to them hoping they will receive it well and the friendship will be strengthened. Friendship isn’t about one-liners and telling people what they want to hear. Friendship involves intimacy.

Our hearts desire to be in communion and union with others. But the more “advanced” we become, the less we know and feel known by others.

The youth who are being brought up this way are being gypped. They aren’t experiencing real relationships and real emotion. I see the effects of this brokenness all the time when I speak to them.

While I can write this blog, there isn’t much more I can do to change people’s behavior. So I do all that I can: I try to change it in my own home.

A six-year-old who knows my son tugged on my clothes the other day and I turned around. He said, “Mrs. Pritchard, does Brady have a DSL or Wii? And what games does he own? Brady doesn’t know what games you guys have at your house.” This cute little boy was looking up at me puzzled, wondering how my son didn’t know the names of the games he owns. I said to him, “Oh, we have a Wii, but we only play video games together as a family just like we play board games, and the only ones we have right now is a sport game and an adventure game.”

Then this child looked at me even more puzzled and said, “I spent the whole weekend playing video games by myself in my room.”

Am I concerned about that child, sitting by himself at age six in his room behind a screen and playing a game that isn’t real? Not necessarily. I mean, most kid play isn’t real. But, what concerns me is the teenager or adult he may become if he is allowed to settle for the counterfeit throughout his growing years.

I’m concerned about him learning that it’s okay to sit isolated from your family in your own room, behind a computer screen where no one is watching. I worry he will find so much satisfaction in the feelings he derives from playing these games, that he won’t exert the energy needed to form real encounters and relationships.

I’m concerned, but what can I do about this epidemic? As I mentioned before, the only things I can do are write this blog and try to control what is happening in my own home.

Here are a few things we can do to help form our children into authentic-experience-seeking and relationship-building adults:

We rarely play video games in our home and when we do we play as a family and it’s fun. We play, we talk, we support, we encourage, we compete, we learn good sportsmanship, and we grow in relationship playing video games like we do playing board games. We have one TV that we all watch together. We don’t have portable devices that the children can take to their rooms and isolate themselves with. Occasionally, as a special treat, I allow the children to play or see something on the iPad while I am there in the room.

We have our children’s’ friends over often to give them ample opportunity to play and engage others in real relationships where they have to learn how to get along and where they see the benefit of their own imaginations and creativity.

I firmly believe that a parent’s role is not to sink into a constant routine of trying to entertain and fill their children’s time so they don’t get bored. I want my children to get bored because it is when they are bored that they end up having to fill their own time. What they come up with is better than any movie I have ever seen or video game I have ever played. They end up becoming producers of creative and imaginative works of art, music, and play instead of mere consumers of what someone else has come up with in a video game or movie.

Simply put, we make an intentional effort to disconnect in order to connect with real life, love, and people. The sacrifice is challenging living in this technologically entranced space and time, but it is worth it knowing that what we are attempting to do will help our children form real relationships with people, live fully as they actually play sports and music, and personally encounter the beautiful places in this world.

These are a few of the things we do. I would love to hear things you do with your children to help them engage in authentic activities and experiences. Feel free to share your ideas in the comments.