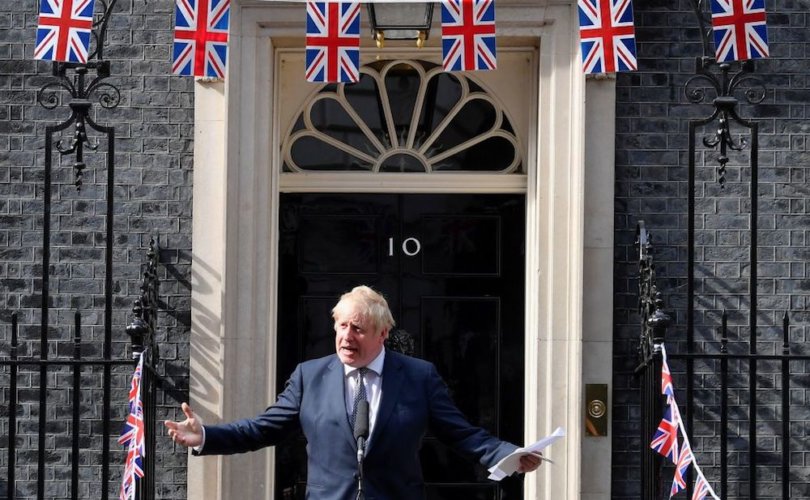 (LifeSiteNews) – U.K. Prime Minister Boris Johnson has been a mixed bag. As I reported in a column last month, Johnson has waffled back and forth on a range of LGBT issues, vacillating between concerns with gender ideology held by medical professionals, psychiatrists, judges, and many of his own MPs. It was initially reported that his concerns were enough for the Tories to drop the planned so-called “conversion therapy” ban entirely—but Johnson hastily reversed course and promised to pass the law under protest from LGBT activists and figures like former Archbishop of Canterbury Rowan Williams.

But this came with one caveat: Johnson stated that a new iteration of the bill would not cover gender dysphoria. LGBT groups, predictably, were outraged, and many wondered if Johnson would cave again. Today’s Queen’s Speech has confirmed that he did not, and that gender dysphoria will not be covered under the conversion therapy ban. According to The Independent, the ban “will cover all attempts to induce children to switch their sexual orientation, but will apply to over-18s only if they do not consent to the process or are forced or coerced into undergoing ‘therapy.’” The Queen’s Speech stated that the bill will “ban conversion therapy practices intended to change sexual orientation” which cause “extensive harm.”

Johnson’s spokesperson called conversion therapy “abhorrent,” but also noted that those over 18 “can consent to conversion therapy”—in short, legal adults can pursue therapy to reduce unwanted attractions. The planned legislation seeks to buttress already-existing criminal law to ban “non-physical conversion therapies to complement existing legislation which protects people from acts with inflict physical harm” and “violent conversion therapy is recognized as a potential aggravating factor upon sector.” The law will include penalties removing “any profit” from those who provide the banned therapy.

The exclusion of transgenderism, however, was explicit. The provided government document stated: “Recognizing the complexity of issues and the need for further careful thought, we will carry out separate work to consider the issue of transgender conversion therapy further.” This reflects the earlier comments of Johnson and his ministers, and was roundly condemned by LGBT groups. Former LGBT government advisor Jayne Ozanne, for example, called the government’s caution “an utter disgrace” and accused them of siding “with the abusers.”

This move may be significant (depending on whether Johnson caves on the issue later). This is the first time a major Western leader has heeded the testimonies of de-transitioners and medical experts warning of the irreversible harms being done to children by the sex-change industry, as well as recognizing that gender ideology is not settled science. The fact that Johnson was willing to take the backlash without budging indicates that he may be willing to hold strong on the issue as a counter-consensus to the gender ideology that has swept Western democracies begins to emerge.

The transgender movement wants to solidify its cultural gains in law immediately, before dissenting voices can gain volume and key tenets of their ideology are rebutted by its victims. Johnson is denying them that opportunity, and that is the source of their rage. The U.K.’s courts have already ruled that gender transition for children should be rejected; Britain’s Christian community and feminist movements have found common cause in their rejection of much of gender ideology; increasingly, legal and medical experts are warning that the implications of gender ideology on children are and will be devastating. For the moment, at least, Boris Johnson and his government appear to have heeded these warnings. If they hold their ground, we may see this moment as a watershed victory in the fight to step the transgender tide.