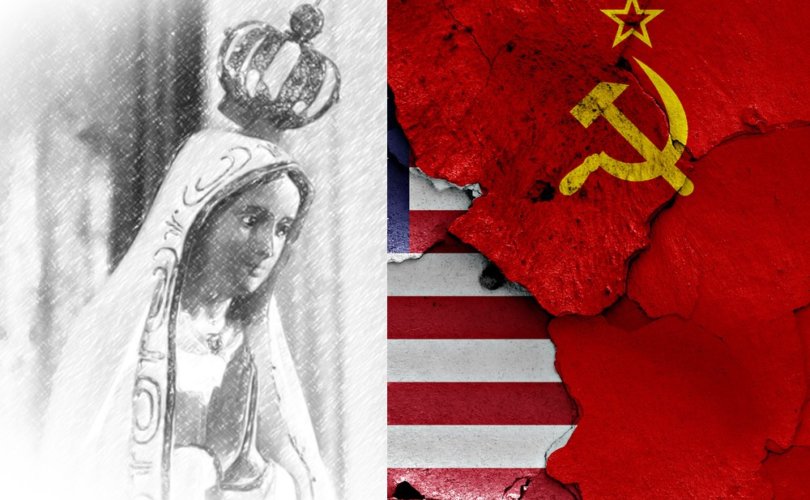 (LifeSiteNews) — Bishop Athanasius Schneider kindly sent LifeSite an assessment of the consecration text as it has now been officially published by the Vatican as it is meant to be read on March 25, the Feast of the Annunciation. With it, Pope Francis wishes to consecrate Russia and Ukraine, together with the Church and all humanity to the Immaculate Heart of Mary. Many Catholics were concerned about the fact that Pope Francis suddenly added Church and all humanity to the objects of this consecration.

Comparing the wording of the two previous acts of the Consecration done by Pope Pius XII (in 1952) and by Pope John Paul II (in 1984), the words and the form of the Consecration which will be used by Pope Francis are more clearly expressing the requests of Our Lady of Fatima than that in 1952 and 1984.

The Kazakh prelate of German origin further expounded that “Pope Francis added even the word solemnly consecrate, an expression lacking in the formulas of 1952 and 1984.”

1952: “In a very special way, we consecrate all the peoples of Russia to the Immaculate Heart of the virgin Mother of God.”

1984: “O Mother of men and peoples, in a special way we entrust and consecrate to you those men and those nations, which of this entrustment and of this consecration they particularly need.”

2022: “To your Immaculate Heart we solemnly entrust and consecrate ourselves, the Church and all humanity, especially Russia and Ukraine.”

The 1952 consecration was done by Pope Pius XII without the participation of the bishops of the world, and the 1984 consecration did not even mention Russia by name.

Therefore, if one considers Bishop Schneider’s words here, we Catholics may dare to have some hope with regard to the upcoming consecration, even though there are also numerous critical voices, for example by the well-respected expert on Fatima, Yves de Lassus, the son of Arnaud de Lassus, one of the great traditional leaders who is now deceased. In de Lassus’ eyes, Russia (with possibly Ukraine, since it belonged earlier to Russia) alone needs to be mentioned, and an act of reparation, as well as the First Saturday devotion needs to be promoted by the Pope.

Another expert on Fatima, John Salza, told LifeSite’s John-Henry Westen that the formula of consecration as presented by the Vatican “does contain the necessary elements.” He said, “Russia (and Ukraine) are given pre-eminent importance due to the word ‘especially.’ Heaven did not provide the actual consecration formula and did not impose any negative conditions to my knowledge (meaning not to add other objects to the consecration).” He further explained that “this formula is not what I proposed in my own recommendation to Vatican sources, but it does contain the necessary elements (of course, all the bishops must also participate).”

Chris Ferrara, another well-known Fatima specialist, also told LifeSite that he had some hopes with regard to the upcoming consecration.

Yet with this latest attempt at a consecration of Russia there is reason for optimism,” he said.

“Barring any further meddling by Modernist papal advisers, the published text, which is being communicated to the worldwide episcopate with an invitation to invoke it at the appointed time, will finally link the words ‘consecrate’ and ‘Russia’ in a public declaration by the Pope, who will recite the operative words in union with as many of the world’s bishops who join him on Friday.”

“We can hope for the best,” Ferrara added. “It seems to me that we can hope for the best, given that for the first time since Our Lady appeared to Sister Lucy at Tuy, Spain in 1929 to request the Consecration of Russia by the Pope and the world’s bishops precisely that is about to happen, albeit amidst a verbal jumble of other objects of the ceremony. We can only wait and see.”

Bishop Schneider had said last week that we can “only rejoice” about the consecration and had also petitioned other bishops to join the March 25 act of consecration, a petition that might very well have contributed to the fact that Pope Francis shortly thereafter declared that all bishops of the world will be asked to join him.