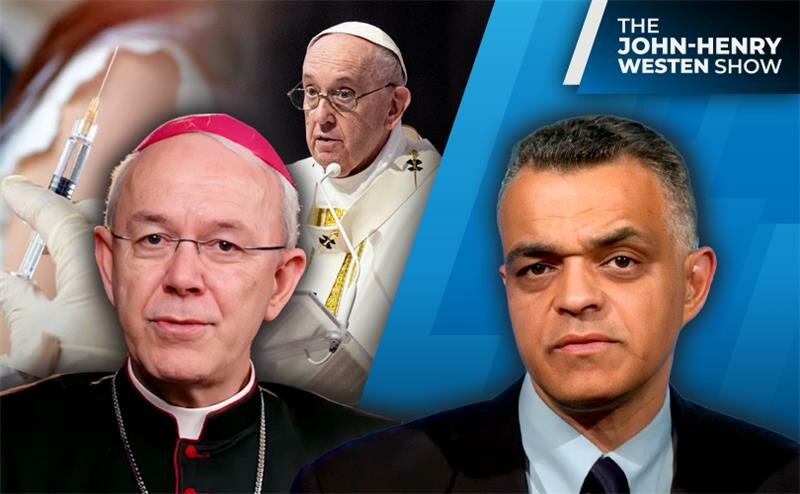 (LifeSiteNews) — As promised, today’s episode of The John-Henry Westen Show is Part 2 of my 3-part interview with Bishop Athanasius Schneider.

In this segment of the interview, I ask His Excellency about the evils of relativism and modernism invading the Church, namely what the meaning of the dogma “No salvation outside the Church” really means and how that should inform the Church’s relationship with other religious leaders.

Bishop Schneider is very clear: Christ is the only way of salvation for all peoples, including the Jewish people. The idea that God wills a “plurality of religions,” which is something Pope Francis has said, Bishop Schneider calls “heresy.”

His Excellency also has some strong words for the Vatican on its “error” in promoting the ineffective abortion-tainted COVID jabs. Listen to today’s interview below or watch the video above. Find the full transcript of the interview below.

Transcript of part two on my interview with Bishop Schneider:

John-Henry Westen: One of the things I loved was the interview you did with Mother Miriam on Mother Miriam Live, which we air at LifeSiteNews every day. So beautiful to see the two of you together, you’re two heroes of mine. One of the things that she mentioned to you was about how the salvation for the Jews must come through the Catholic Church. It is one of the teachings that is so little talked about and disdained in the Church today. Extra ecclesiam nulla salus is the old formulation of it, meaning “outside the Church there is no salvation.”

Pope Benedict, after he retired even or resigned, wrote this book in which he writes also of the missionary zeal from years gone by. Was there because they thought they had to bring the faith to the pagans for salvation. But now there seems to be – almost officially in the Church, because Pope Francis has sort of hinted and said so even – [an idea] that the Catholic faith is not necessary for salvation, that you can have Protestants, you can have people of other faiths getting to heaven as well. Can you explain that for us? What it means and what are we to make of it, and the concept also about a person in conscience not knowing and how that would play out?

Jesus Christ said “I am the way, the truth and the life and no one comes to the father except through me,” and St. Paul says, “whoever does not accept Jesus Christ, upon him will remain the wrath of God.” These are words of the Holy Spirit, inspired in the Holy Scripture. And the Jews are the first who have to believe in Jesus Christ as their redeemer, because He came first to His people. He says, I came first to the children of the House of Israel. And only then the Church went to the pagans.

And so this remains true for all time until now: the Jews are the first who have to believe and accept Jesus Christ as their savior, even today – there is no other way. And the Church must have a missionary zeal first for the Jews also, because the first church in Jerusalem was almost built up from Jews only. This was our mother church.

And so we have to strive to pray for the true conversion of the Jews to Jesus Christ, their savior. The so-called diversity or plurality of religions is a heresy, because there is only one way to salvation, and the first commandment of God is still valid – “You shall not have other Gods besides me.” We have to regret that in the last decades, the Holy See started to promote such so-called inter-religious meetings with almost all religions of the world, with idolaters and so on.

It started, unfortunately, with the meeting in Assisi, with John Paul II in 1986, which was a catastrophe because de facto it was giving a message. I say de facto [it gave the message] that the Catholic Church is only one of so many religions and Jesus Christ is only one among the other founders of religions. And these kinds of meetings, which continued, and are continuing, are simply a kind of supermarket of religions, and it is against the Gospel. This is a betrayal of the Gospel. We have to stop with such meetings.

Of course, we can meet with other citizens and our neighbors who are from other faiths, although I would say not from other faiths, from other religions. There is only one faith, one true faith, this is the Catholic faith, and that is not other faiths. We can say religions maybe, and the non-Christian religions. We can have a good neighbor, Moslem or a Hindu, and we will love him with a love of neighbor, we will be kind to him, we can exchange with him some discussions. But I would say these meetings should simply be on the level of our life, of our daily life, with representatives of other religions. But not on an official, institutional level, because this is relativizing, [and] undermining the uniqueness of Jesus Christ and the Catholic faith.

JHW: The last time we were able to speak at length, we spoke about the abortion-tainted vaccines. And you had mentioned at the time that this was a horror that was going on, that no Catholics should submit themselves to such a thing, even under pain of death, and that we had to come up even with a pro-life movement that would specifically fight along these lines for that kind of purity.

Since then, a lot of things have happened. The vaccines themselves have been found to be ineffective. There’s all sorts of things to indicate that they [developers and promoters] knew they were ineffective. And yet the Holy See has not changed its position in support of the abortion-tainted vaccines, in support of even denying people from their own work if they refuse the vaccine mandate, because in the Vatican they implemented one as well. What’s your take on this now? Has it changed at all from when we spoke already over a year and a half ago on this subject? And also with regard to what you make of it, as you said at one time that you thought perhaps if this became global, it could be even a mark of the beast of some kind, or be some kind of foreshadowing of that. What’s your take on this now?

Bp. Schneider: It is always difficult for someone to acknowledge his errors. And it’s evidently now that even the representatives of Pfizer publicly in the European Parliament acknowledged the ineffectiveness of their vaccines, and now the Holy See must recognize this fact. But I repeat, it is difficult to recognize your own errors. This must have courage, humility and love for the truth to be able to recognize this. And this is evidently lacking to those who are currently in power in the Vatican to acknowledge that this was an error.

We already spoke enough and sufficiently about the moral problem of the medicine or vaccine being abortion-tainted, to have a link to the abortion industry and not only to the abortion industry, but also – which is often forgotten today – the so-called fetal industry, which is horrendous and which is growing, and the medicines and vaccines tainted or tested with these cell lines of mothers, children, and which are a product of direct product of the fetal industry.

We can in no way, in no circumstances accept because we are close, not remote, currently to the fetal industry. And we are by accepting the products – tainted in some way, even remotely tainted, they are tainted – when we accept them, we are close. We cannot say remote. And [by taking the injection] I would be expressing my de facto collaboration approval of this horrendous fetal industry and all the culture of abortion. And here we can in no circumstances accept this. Otherwise, we will commit a grievous omission of protesting against abortion and fetal industry.