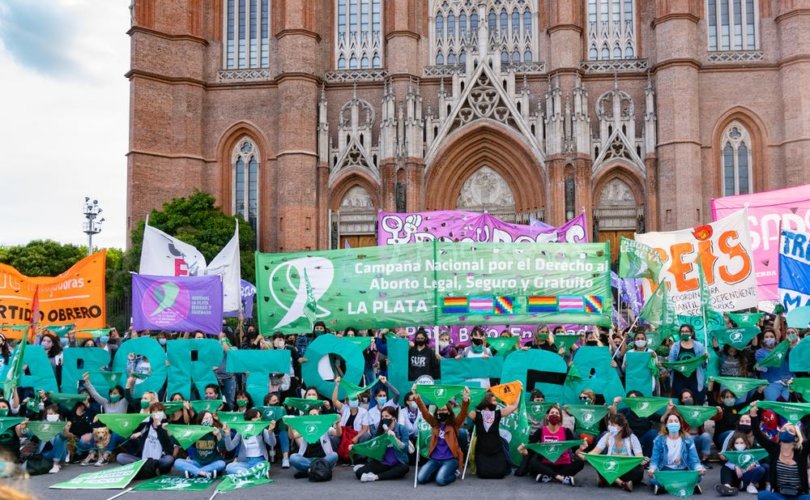 ARGENTINA, December 30, 2020 (LifeSiteNews) – After a fierce debate that lasted through Wednesday night, the Argentine Senate voted at 4:00 a.m. to approve the government’s legislation legalizing abortion through the first 14 weeks of pregnancy. Thousands of pro-life activists, represented by the “Blue Wave” bandanas that mark their movement, waited outside for the result. The announcement, when it came, was crushing. Many sobbed with grief.

Crowds of gathered abortion supporters also waited, clad in green. When the vote was announced – 38-29 with one abstention – the abortion supporters went wild with joy. Children could finally be aborted legally in Argentina. The crowd of green was a writhing mass of celebration, coiling and uncoiling. It was, as C.S. Lewis described the Lady of the Green Kirtle, “as green as poison.” Ember smoke rose above the crowd as the result was announced.

The Congress approved the legislation earlier this month, the ninth time abortion activists have attempted to legalize abortion in Argentina. In 2018, a proposed abortion law galvanized pro-lifers across the country and the continent. Millions joined the Blue Wave movement, with more than four million marching in Argentina to protest legalization and massive rallies pushing back against abortion activists in Guatemala, Chile, the Dominican Republic, Mexico, and elsewhere. Scenes of celebration awash with green last night are the inverse of that joyful night two years ago, when it was pro-lifers cheering in the streets.

Many pro-lifers expected a narrow victory last night, with the Catholic clergy calling on politicians to reject the bill – although there has been widespread disappointment with the extraordinarily muted response of native son Pope Francis, especially considering the wide range of issues on which he frequently comments. A strong majority – nearly 70 percent – of Argentines do not support abortion, and Evangelicals marched rank and file with Catholics to stop the proposal. President Alberto Fernandez, who heads Argentina’s left-wing coalition government, has long promised to ramrod legalization through anyhow.

Argentina’s Blue Wave movement is now regrouping to strategize a response. One speaker, addressing the mourners from a makeshift stage, promised to fight on: “We are witnessing a defeat of life. But our convictions do not change. We are going to make ourselves heard.” Pro-life activist Sara de Avellaneda told the Clarin newspaper that the fight against abortion will continue: “I came because I had to be here. We are not invisible. Not everything is a green tide. This law is unconstitutional and its implementation is not going to be easy.”

It is a dark day for Argentina’s most vulnerable children, and the carnivorous shrieks of joy that met their betrayal were an awful glimpse into the ongoing collapse of precious cultural values. The Reuters headline announced: “Sisters, We Did It.” But as Charles Camosy noted: “The bill was pushed by a male health minister and a male president who strongly campaigned against prenatal justice. Argentine women overwhelmingly rejected this bill.”

Their dedication to the protection of human life will be all the more essential in the days ahead.