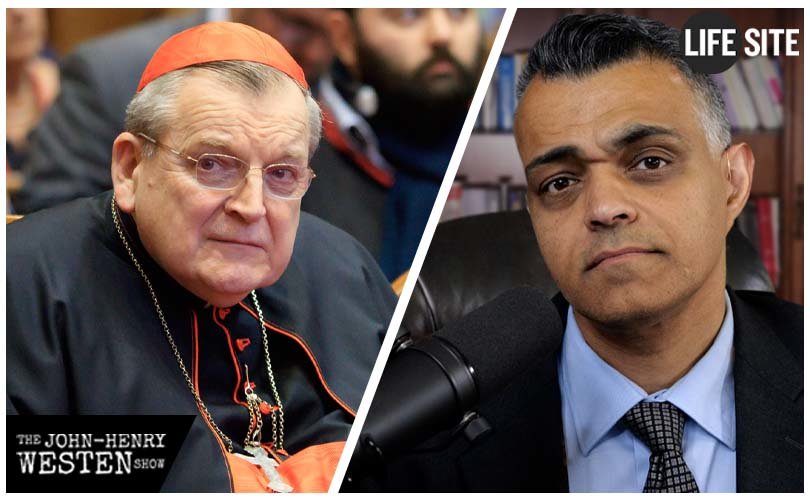 (LifeSiteNews) – As we pray for the recovery of Cardinal Burke, I wanted to share these personal reflections since I’ve had the great grace to know Cardinal Raymond Burke personally for over a decade.

He is a gentle soul. Highly intelligent, yet humble; quiet yet determined, very prudent and kind, generous and totally orthodox. Most of all, he is a lover of Jesus Christ and totally committed to Christ’s Church. He gave up having his own family to serve as a priest, and then, thanks to his great gifts from God, which he honed to better serve the Lord, he rose through the ranks of the hierarchy.

And even after reaching the heights of the Cardinalate, being appointed by Pope Benedict XVI as the head of the highest court in the Church – a position akin to the chief justice of the US Supreme Court – he was ready to give it all up in order to be faithful to Christ and His Truth. And indeed, he was called to make that sacrifice for standing up when pressures were most intense.

At first, Pope Francis removed Cardinal Burke from his position as a member of the Congregation for Bishops, where he’d been able to exert considerable influence on bishops’ appointments worldwide. And then, in November 2014, Pope Francis summarily dismissed Cardinal Burke from his position as head of the Vatican’s highest court, the Apostolic Signitura.

In effect, Cardinal Burke went from the highest ranking American in the Vatican to serving as the patron for the Order of the Knights of Malta, a largely ceremonial position.

The move was so stark even left-wing Vatican experts, including Crux’s John Allen and Catholic News Service’s Francis Rocca, reported at the time that it was rare for a cardinal in such a high position at the Vatican to be removed without being assigned similar responsibilities.

Cardinal Burke was, in essence, treated in a fashion unseen in modern church history, even for those who had gravely offended their duty. But nevertheless, Cardinal Burke continued in good spirits without ever expressing anger or resentment at the totally unjust and scandalous way in which he was treated.

He followed St. Paul’s admonition to bishop Timothy, as recorded in the Holy Bible, to speak the truth in season and out of season, even when that meant it would cost him dearly.

Cardinal Burke was a total hero for defenders of life and family in the English-speaking world. He was the most outspoken prelate on the topic in the Church. He had the courage to speak out to defend the holiness of Communion from the highest-ranking self-identified ‘Catholic’ politicians in America, including former Vice President John Kerry, Speaker Nancy Pelosi, and Joe Biden.

But the good Cardinal voiced his concerns and admonition that these nominal Catholics be denied Holy Communion out of concern for them, not out of any kind of hatred or animosity. He told me himself: why add to their sins, the sin of sacrilege.

Cardinal Burke was gracious with his time as he gave many interviews to LifeSite over the years. And when LifeSite launched our Rome Life Forum – an annual meeting with life and family leaders in Rome, Cardinal Burke was there to speak, and did so each year since then. When LifeSite, as part of Voice of the Family launched a youth conference in Rome, Cardinal Burke also made himself available each year. What a great grace it was for the young people to meet his Eminence. To be able to ask him questions directly and to receive his blessing. He took time to meet with them individually, and took to heart their concerns, prayer requests and was also buoyed himself by their prayers, well wishes, and true brotherly love.

Moreover, the love and admiration was mutual. He expressed his “solidarity” with the Rome Life Forum conference participants, praising them for their “commitment to safeguard and promote the inviolable dignity of innocent and defenseless human life, and the integrity of its cradle in marriage and the family.”

He ended his talk by saying, “In the context of the Rome Life Forum, I close by expressing my deep appreciation for the martyrdom which so many of you embrace for the sake of the defense of human life and its cradle in the conjugal union of husband and wife. We embrace indifference, ridicule, rejection, and other forms of persecution because we love Our Lord and all our brothers and sisters in Him, in His holy Church.”

But here’s my favorite recollection of Cardinal Burke. It involves the Church’s difficult teaching on homosexuality which he has always spoken without fear of reprisal, but also with great charity. When he was still bishop in Wisconsin, then Bishop Burke had a local Catholic who left the Church to pursue a homosexual lifestyle.

In 1995, Eric Hess boxed up his crucifixes and Bible and dropped them off at Burke’s office, renouncing his Catholic faith and embracing same-sex relationships. Burke was then the bishop of La Crosse, Wisconsin.

Burke told Hess that he respected his decision, but would pray for his return to the faith and would be ready to welcome him back should he come home. Hess who was a homosexual activist resented Burke’s outreach and threatened to press charges should Burke contact him again.

Three years later, Hess returned to the faith. He called to let Cardinal Burke know of his conversion and the Cardinal asked to see him in person. When he arrived the Cardinal received him with great joy and asked if he recalled the box with his Bible and crucifixes he had left. Believe it or not, the cardinal still had Eric’s box of Catholic items, which he had kept, believing Hess would come back to Christ and His Church. And here are the words of Eric Hess, reflecting on Cardinal Burke.

“While some malign Archbishop Burke for his fidelity to God, Church and all souls, I say that he is a true shepherd of the faithful and a present day Athanasius. I tell you that he remains a mentor and an inspiration to me. Although my own biological father rejected me, Archbishop Burke became my spiritual father by lovingly representing our Father in heaven.”

That is Cardinal Burke. A true pastor, a spiritual father, willing to tell the truth even when it hurts and always ready to receive the prodigal son with joy, love, forgiveness and blessing.

As for my part I can only be grateful for the time that I was permitted to spend personally with Cardinal Burke. He is a lover of Christ like few others. He has been as His master a sign of contradiction. He is a saintly shining example of the love and service of Our Lord Jesus Christ in the midst of a fallen world. May God bless you Cardinal Burke. We have been praying for you daily at LifeSite for years and we will continue to do so.