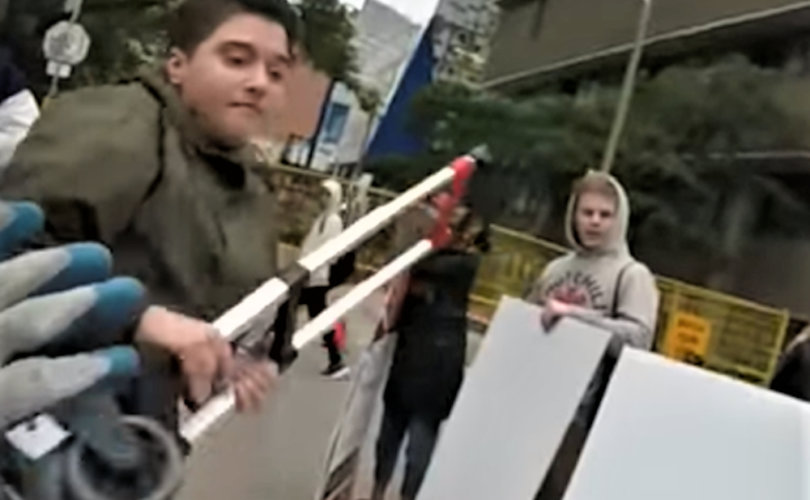 A screengrab from the video showing the attacker, Jordan Hunt, kicking Marie-Claire Bissonnette in the shoulder, knocking her phone from her hand, Toronto, Sept. 30, 2018.

TORONTO, October 4, 2018 (The Bridgehead) – The video of abortion supporter Jordan Hunt roundhouse-kicking a peaceful pro-life woman earlier this week has gone viral, with millions watching videos of the assault on social media. When the video was first released, many of my colleagues at the Canadian Centre for Bio-Ethical Reform noted that Hunt looked very familiar. When they reviewed footage of an assault on one of our young female interns earlier this summer during a pro-life demonstration in Toronto, we discovered why: Jordan Hunt was the attacker. It turns out that his assault earlier this week is not the first time he has attacked a pro-life female for expressing her views in public.

Several witnesses, as well as the female intern who was attacked by Hunt, have confirmed his identity and the police have been notified. The video below shows both the assault, as well as a verbal confrontation with another pro-life intern afterwards:

The pro-lifer assaulted by Jordan Hunt was participating in the pro-life summer internship that Prime Minister Justin Trudeau has attacked several times in relation to the Canada Summer Jobs Program (many pro-lifers have stepped up to support these interns after the Liberal attacks—if you wish to do so, you can do that here.) Contrary to the false narrative promoted by politicians and the media, it is not pro-lifers who engage in harassment—rather, they are regularly the targets of it. Despite this opposition, CCBR’s summer internships results each year in countless minds being changed on abortion.

More footage of the violence perpetrated regularly by abortion supporters will be released in the coming days.