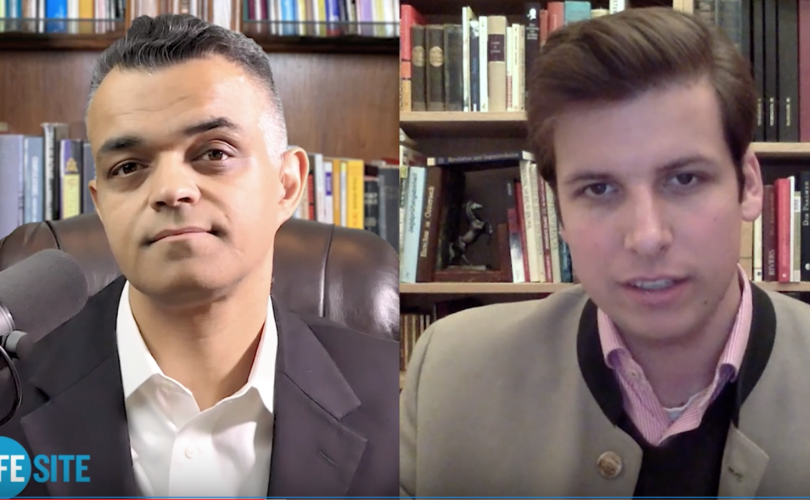 November 4, 2019 (LifeSiteNews) — The man who tossed the infamous Pachamama statue into the Tiber River has revealed his identity today in a video explaining why he removed the “pagan idol” from Santa Maria in Transpontina church near the Vatican last month.

Alexander Tschugguel, 26, of Vienna, Austria, spoke to LifeSite co-founder John-Henry Westen, telling him, “for me, it was really bad, because I saw in those statues and in those idols…a break of the First Commandment.” He says he was motivated simply by the desire to “bring pagan things out of a Catholic Church.”

A convert from Lutheranism who embraced the faith 10 years ago, Tschugguel, who was in Rome covering the Amazonian Synod, told LifeSite that he consulted with a priest and prayed many rosaries with his wife before going through with it. “The spiritual preparation was everything,” he said.

When he arrived at the church, he discovered it was still closed. He decided to pray the rosary and the door was soon unlocked, entering the second it was opened. He stated that he was not worried about the consequences or if things didn’t go as planned.

“If we always think about what happens afterward, and if we always think that way, we will never get anything done.” If there is something bad happening in a Catholic Church “we have to act,” he said. “Whatever can happen, it can never be that bad.” The “worst thing” that could happen is to not get into heaven.

Watch his video statement about why he removed the statue below:

Tschugguel, who is active on twitter, has since established the St. Boniface Institute, an organization for Catholic laymen who want the Church to live out its traditional teachings. “Our idea is not to be quiet any more,” he said. St. Boniface is an 8th-century monk perhaps best known for chopping down an oak tree esteemed by German pagans.

Tschugguel says he removed the statue not out of a desire to offend anyone but because he wants the Amazonian people themselves “to have the truth of Christ” and not some “mock Christian religion.” He denied he was trying to draw attention to himself in any way but admitted “it’s fantastic to see” the many supportive voices that have come out since his video was published, especially clergy. At present, more than 20,000 signatures have been added to a LifeSite petiton supporting the removal of pagan symbols from Vatican property.

Tschugguel told LifeSite it is the duty of all Catholics to respect the pope and that in no way does he hate Pope Francis, as some have alleged. “It is our duty to pray for the pope and to support him and respect his authority,” he said. “If we would hate the pope, why would I pray for him?”

“Please, Holy Father,” he continued, “understand this, as Catholics, we just don’t want pagan things in the Catholic Church. We want our churches to be clean and pure about the faith and we want the Church to follow Jesus Christ and that’s it.”

Tschugguel said he rejects the idea that what he did was theft because the objects were “pagan idols” that didn’t belong in a Catholic Church. “I will face any legal challenges in the same way, calm…I am not frightened. I’m not really afraid.” He also said he has other videos and photos proving he is the one who did this, and not someone else.

Tschugguel's analysis of the Synod is that it left him feeling “very disappointed.” It was “a big mixture of wrong ideas…social justice…liberation theology,” he said. The Synod “goes hand in hand with the globalist agenda, too.”

The young man acknowledged LifeSiteNews and other media supporters today, tweeting: “Thank You for all Your prayers and support. @LifeSite @jhwesten @TaylorRMarshall @Church_Militant @KatholikenNet.”

When asked what sort of advice he had for young Catholics, Tschugguel said they should attend the local traditional Church, pray “tons” of rosaries, and then study the faith so they can defend it in public. He also reccommended they go to their families, friends, nearby pro-life groups, and make their voices heard. If something “is not Catholic, speak up!…We are part of the battle between the Kingdom of God and the reign of the devil.”