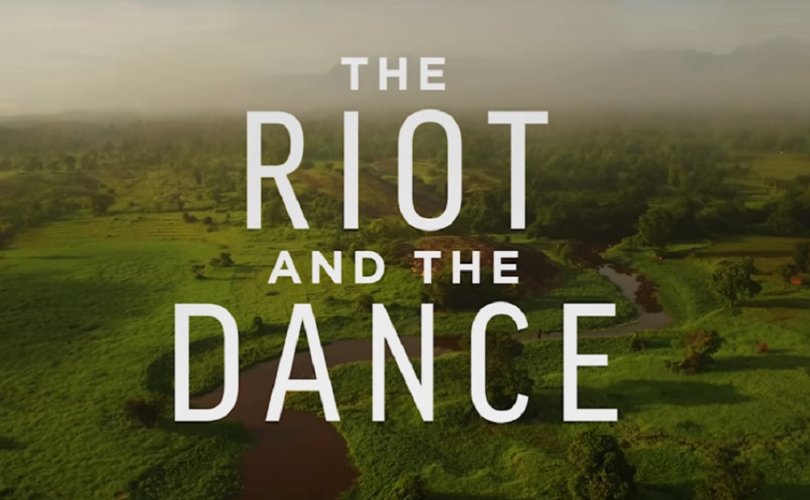 It is not often that I review a documentary – and even less often that I review a nature documentary. But Dr. Gordon Wilson’s The Riot and the Dance, which is scheduled for a March 19 release, is a truly magnificent journey from his backyard to the Grand Senora Desert to the jungles of Sri Lanka, stopping along the way to meet bizarre and beautiful creatures – some of which you will probably have never heard of.

Wilson’s documentary begins, with a magnificent backdrop of turquoise waves smashing themselves to smithereens against shiny black cliffs, with the words of Genesis 1:1: In the beginning God created the heavens and the earth. It all begins there, after all – the story of everything. Scenes of wonder flash past: a snake’s smooth coil, a hummingbird’s wings slowed down so the human eye can see their lightning movements, the steam from a bison’s nostrils. The riot and the dance.

Wilson keeps a little note on the side of a filing cabinet of his office at St. Andrew’s College, where he teaches biology. It was sent to him during his time at university. “Gordon,” it reads. “You’ll never be able to call yourself a biologist if you continue to hold the views about evolution that you demonstrated last week. You’re a bright person. Start using your own mind!” The irony of a free-thinker being told to think with the herd, one might say, is matched only by the irony of someone who believes that the brain developed entirely by accident telling another to use it with any measure of free will.

Wilson is actually in the company of giants when he says he studies nature to know more about God. Many of the greatest scientists who ever lived felt the same way – not the least of whom was Isaac Newton, who felt that all of his scientific work simply gave him a more intimate glance into the Mind of the Creator. If the world we see around is not, in fact, an accident, but rather the artwork of a Supreme Being, then we can learn much about the Artist from His work. This, primarily, is the thesis of Wilson’s dazzling visual banquet.

In a world of buzzing and blinking cell phones and emails that never stop, Wilson says, we have come to see the ordinary miracles around us as banal. Think, he says, of what is actually just outside your doorstep. And so I do. I think of the little fox that crouched in the grass alongside the road at one particular fork each night last spring. I think of the weasels that dart across the road so quickly you wonder whether you really saw them. I think of the little bats that flit about above my head on country walks in the summer at dusk, snapping up insects too small to see. I think of the raindrops that hit the backroads and seem to immediately morph into grotesque but dignified toads in their thousands. All of them impossibly complex in their own way – all of them thought up in the mind of the Creator. Not banal, when you consider it a moment. Breathtaking.

Wilson does not shy away from the savagery, either. He shows ugly elephant seals jousting with each other, angry and snorting and covered with scars. Fat mother seals roll over their pups and kill them. Sea gulls show up to eat the corpses. Nature, he points out, groans under the burden of sinful man. It reminds me of my grandmother’s reaction whenever she would hear a cow bawling in pain in the barn during calving. She would shake her head with tears in her eyes. “It’s all because of our sin,” she would say softly. Innocent creatures suffer because of us, and she could never forget that.

It is impossible to view the forests and the jungles and the deserts, throbbing with life of every kind, and not marvel at the Mind that thought everything up. Wilson spends some time following the Asian elephant in Sri Lanka, explaining how the grey behemoths make friends for life, deeply mourn the loss of loved ones, and will even journey back to death sites to reflect on those who died years before. I remembered watching African elephants when I traveled in Africa last year with my wife to see the Great Migration – the adults caressing each other with their trunks, and sometimes wrapping the trunks together, the little ones wrestling in the grass. Such sights stick with you and make you hate the needless cruelty of wanton destruction that some seek to wreak on these wonderful animals.

The Riot and the Dance is no ordinary nature documentary. It is a film that seeks to drive home a simple point: we can learn about the Artist from His artwork, and His artwork is all around us. Take the time to watch Wilson’s offering. You will step out your back door with new eyes, and perhaps be reminded of the wonder of everything that surrounds us.