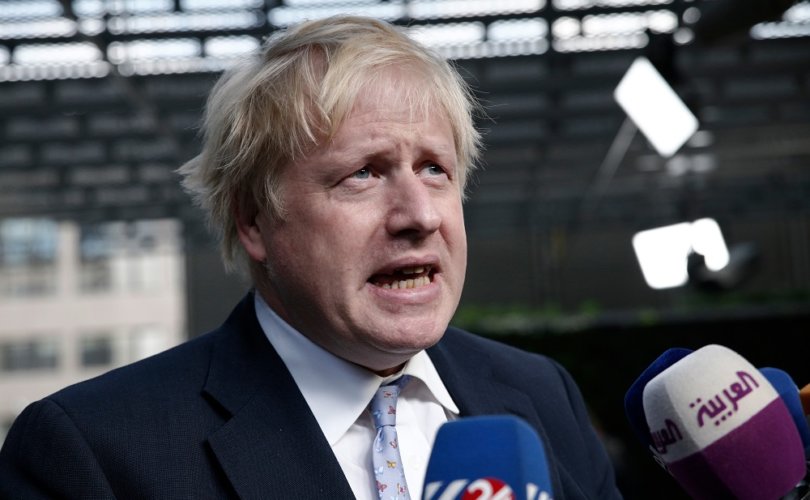 December 13, 2019 (LifeSiteNews) — U.K. prime minister Boris Johnson secured a smashing victory last night, routing Jeremy Corbyn’s Labour Party up and down the country, snatching seats that Labour has held for nearly a century, and ending the evening with sweeping majority of 364 seats to Labour’s 203. Every commentator seems to agree that this political earthquake constitutes the dawn of a new era, but very few can pinpoint what precisely it means and what the Reign of Boris will look like.

As I wrote in this space when Johnson first took up residence at 10 Downing Street, I’m under no illusion that the mop-topped political chameleon is a social conservative. His track record on promoting the LGBT agenda and his bullishness on abortion indicate a politician that operates based on the principles of Machiavelli rather than Moses, and one of the reasons that nobody is completely sure what sort of conservative leader Johnson will be in the long run is because he has been remarkably willing to change his views if it appears to be expedient.

But that said, there are a few very positive bits of news that we can take away from last night’s results. The first, and most obvious, is that Jeremy Corbyn’s poisonous anti-Semitism was thoroughly rejected by U.K. voters. While devastated Labour voters claimed last night that Johnson’s triumph constituted a victory for racism and Islamophobia — which is patently ridiculous — they ignored the fact that the Labour Party was so thoroughly infected by Jew-hatred that Britain’s chief rabbi had come forward to voice his concerns and over 80% of British Jews had concurred with his sentiments. Corbyn has now resigned as Labour leader, and good riddance.

Secondly, it appears that Brexit will finally happen. The European Union is a governmental body overtly hostile to Christian and social conservative beliefs, thus this assertion of national sovereignty over the rule of Brussels is a welcome blow to the Eurocrats. Britain’s progressives had insisted that U.K. voters had simply misunderstood what they were being asked in the first Brexit referendum, thus had demanded (as progressives so often do when they do not get the result that they want) that the U.K. try it again to see if a more appropriate result could be secured. This election was nothing if not another referendum on Brexit, and it appears that they have received the same answer.

Finally, Liberal Democrat leader Jo Swinson, a much lauded darling of the Left, lost her own seat in Dunbartonshire East to the Scottish National Party, possibly aborting a career that many progressives were watching hopefully. Swinson, who became leader only in July, had made the LGBT agenda a key part of her platform, pledging to reform the Gender Recognition Act to make it simpler for transgender people to legally change their sex on identification, add the recognition of so-called “non-binary” people on official passports, and ensure that all children were taught about LGBT relationships — and that was just for a start.

We do not yet know what sort of conservative — if he is any sort at all — Boris Johnson will prove to be. But the fall of socialist Jeremy Corbyn and the loss of LGBT activist Jo Swinson are two very welcome repudiations to the radical Left, and if the wailing on Twitter is any indication, progressives see these twin setbacks as an enormous blow to their agenda in the United Kingdom. Johnson is promising to promptly take the U.K. out of the European Union, finally ending the deadlock between U.K. voters and the elites who were sure that a new referendum would produce a different result. Johnson, for whatever it is worth, is listening to the people — and progressives don’t care for what he is hearing.

Jonathon’s new podcast, The Van Maren Show, is dedicated to telling the stories of the pro-life and pro-family movement. In his latest episode, he speaks with the editor of the National Review, Rich Lowry, about his latest book, The Case for Nationalism: How It Made Us Powerful, United, and Free. Van Maren and Lowry also speak about where America is headed, “the age of Trump,” the rise of division in our political climate, and the need for maintaining culture in order to maintain a democracy.