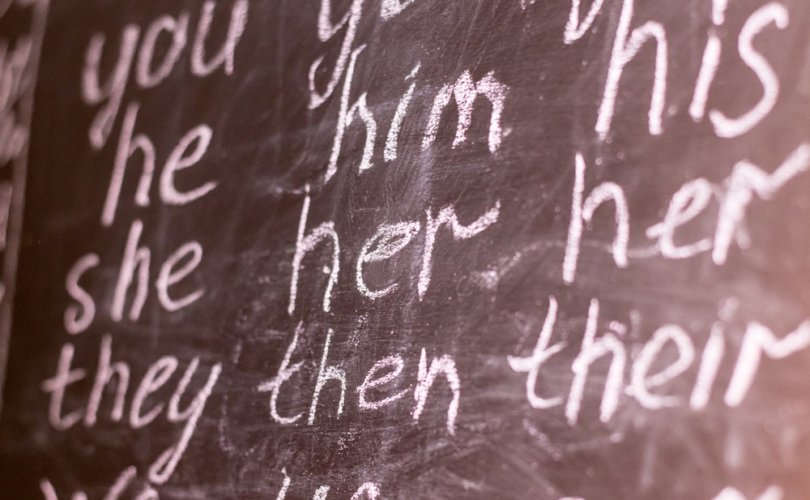 (LifeSiteNews) — According to recently released documents, the Trudeau government’s justice minister, David Lametti, asked his department staff in 2021 to draft a directive that would force federal lawyers to offer their “pronouns” at the start of any proceeding.

According to a memo titled “Proactive Identification of Gender Pronouns,” the Minister’s Office was “made aware of a practice of communicating gender pronouns in British Columbia courts” during a “positive Space training held by the Advisory Committee for Sexual Orientation and Gender Identity and Expression (ACSOGIE) previously known as the ‘LGBTQ2+ Advisory Committee.”

This revelation “inspired” the Minister’s Office, which asked the National Litigation Sector “to develop a directive requiring Justice counsel to provide their pronouns and titles…in all court and administrative proceedings.” This is apparently standard practice in BC, Manitoba, and Nova Scotia.

The memo concluded that because the Department of Justice is “also committed to bringing about a more inclusive society, including through the legal system,” for the time being a “non-mandatory approach strongly encouraging or inviting the identification of pronouns is preferable, with a focus on education and leading by example.”

The memo concludes by laying out the various ways in which Canada’s Department of Justice will lean into the promotion of gender ideology, including sending messages “to all staff from the Deputy Minister encouraging or inviting them to proactively implement the practice”; hosting “training/information sessions” so that “employees understand why they are being invited to proactively identify pronouns” and “the harms they are helping to address by doing it”: putting pronouns in all email signatures; including pronouns in the biographies and signatures of staff members; and “inclusion of pronouns at events and in speeches for Minister and Deputy Minister speeches” with the goal of this practice becoming “a standard feature of all speeches.”

Which, you’ll admit, will wield real rhetorical power: “My name is Justice Minister David Lametti – he/him, in case you were wondering.”

None of this is surprising, but it is another glimpse of how effectively every level of government has been infiltrated by gender ideology and the near-total commitment of the Trudeau government to ensuring its implementation. Once the question is posed, it is inevitable that the practice will eventually be made mandatory. After all, if staff are told that actual “harm” is perpetrated by not proactively offering their pronouns, what possible reason could there be for not doing so? And what excuse do the champions of the transgender cause have for not exerting their power to ensure that “harm” is not caused to the transgender community? The question answers itself.

It isn’t just liberal governments and it isn’t just Canada, either. Staff at the Ministry of Justice in the U.K. – which, you’ll recall, still has a Conservative government – were given a blacklist of 35 phrases to avoid in order to be proper allies to the transgender community. From the Daily Mail:

Ahead of transgender awareness week, thousands of officials were emailed a glossary titled ‘recognising transphobic coded language’ through the HMP Probation Service (HMPPS) diversity and inclusion team, according to The Sunday Telegraph. The document claimed that the phrases were ‘turning what would be considered overt discrimination into covert behaviour,’ and that it was ‘vital we keep scaremongering and misinformation at bay.’

For example, the term ‘gender critical,’ which is used to refer to campaigners who believe biological sex is binary, is claimed to be a ‘term used to make anti-trans discrimination sound palatable or a respectable opinion’ and warns staff to look out for social media accounts that hold this view.

Also listed is ‘protect women’s spaces/protecting women and girls,’ which the document says ‘relies on equating trans women with being predatory men, to play on unfounded fears and convince people that supporting trans inclusion threatens their safety.’

Those internal documents are a snapshot of how effectively our institutions have been hijacked – regardless of whether Liberals or Tories are in power. One set of directives ponders forcing staff to proactively offer their pronouns, thereby implicitly rejecting the gender binary and accepting gender ideology as true. Another states that merely discussing “protecting women and girls” is unacceptable because it might offend men who think they are women.

It won’t be long before there are no “safe spaces” for dissidents who do not accept gender ideology. You will be made to publicly affirm and participate in the new regime or, very soon, you will find yourself out of a job. Policies like this are effective tools to flush out those who disagree, and make the purges that follow a simple thing to accomplish.