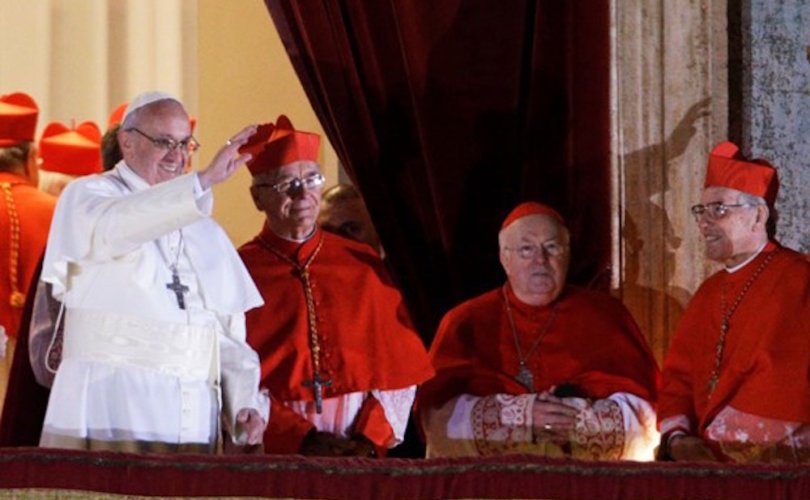 August 1, 2019 (LifeSiteNews) – Catherine Pepinster, the former editor-in-chief of the British Catholic weekly, The Tablet, published two years ago a book in which she claims that the British Foreign Office may have played an important role in the 2013 papal election that resulted in Pope Francis' election. Based on many interviews with key figures such as Cardinal Cormac Murphy-O'Connor and the British Ambassador to the Holy See, Nigel Baker, she claims that the UK “played a crucial role in the election of the Argentinian destined to shake up the Catholic Church.”

In her 2017 book The Keys and the Kingdom. The British and the Papacy from John Paul II to Francis, Pepinster deals with the growing relations between Rome and England over the course of several decades, especially also in light of the history of the Reformation and the particular situation of Catholics in England.

Pepinster sees that, with the election of Pope Francis, a new sort of relationship is developing. She states that “Britons have more influence in Rome today than they ever have done before in the last 100 years.”

The reason as to why the British government would take interest in the election of a new pope is also explained by the author. She quotes here Nigel Baker, the Ambassador to the Holy See, who said in 2014: “We have an embassy to the Holy See because of the extent of the Holy See soft power network, the influence of the pope, and the global reach and perspective of papal diplomacy focused on preserving and achieving peace, on the protection of the planet, and on bringing people out of poverty.”

Pepinster recounts in her book how the British government, through the person of the British ambassador to the Holy See, was instrumental in setting up a meeting where key cardinals networked with lesser-known cardinals to promote Cardinal Jorge Bergoglio for pope.

Calling Bergoglio's election a “very British coup,” Pepinster's work suggests that a secular power was involved in the election of a pope.

Pepinster writes that already under Pope Benedict XVI, there was a time of “consolidation for the relationship between the British and the papacy.”

“That growing connection between the papacy and the United Kingdom,” she adds, “was in many ways a recognition of the usefulness of the two entities' own global networks. It is worth examining next how, in March 2013, one occasion did bring these networks together to such dramatic and significant effect that it would change the Catholic Church's course of history.”

Let us now examine how the British were to a certain extent involved in the election of Pope Francis, a man “who would shake up not only the Catholic Church but its relations with the world, and who would try to reshape the institution of the papacy itself.”

First looking back at the 2005 election of Pope Benedict, Pepinster quotes a Tablet article from that time which pointed out that the cardinals who had come from less important and wealthy countries had been left out of the private meetings of cardinals that are traditionally used as means of building an opinion as to who the next Pope should be. The Tablet then wrote that “some [cardinals], especially from the developing world, were living at the outskirts of the city and had no entourage, let alone press secretaries”; they therefore “would have been unaware of the intimate gatherings of cardinals over whiskies or quiet lunches to discuss strategies for the forthcoming election.”

Without naming names, Pepinster goes on to describe how, in 2013, “there was concern that the developing world cardinals could be left on the sidelines again,” since they do not have at their disposal their own countries' embassies in Rome which they could use for receptions or for dinners.

Further describing the situation in 2013 after Pope Benedict's resignation, the author says that “factions had already opened up” among the cardinals, with the curial cardinals being split into two camps – one in favor of Cardinal Angelo Sodano, the other in support of Cardinal Tarcisio Bertone.

“Meanwhile,” she continues, “four leading European cardinal reformers – Cormac Murphy-O'Connor, Walter Kasper, Godfried Danneels and Karl Lehmann, all of whom were thought to have backed Jorge Bergoglio in the 2005 conclave – realized that these splits afforded them an opportunity.” They had supporters for their cause among Latin American and some influential Europeans voters, she explains.

Pepinster quoted papal biographer Austen Ivereigh and his statement that there were 11 African and 10 Asian cardinals, and that “for the ones from historically English-speaking nations, the British cardinal, Murphy-O'Connor, was a reference point, and key to bringing them onside.”

“This is where the UK made a substantial contribution to the run-up to the 2013 conclave,” writes Pepinster.

Conversations among people in senior positions in the Church in London and Rome led to the realization that there was a major overlap between the developing world and the British Commonwealth. Where better to host a gathering for the cardinals who had no real base than the UK embassy to the Holy See?

The idea that the British could provide a meeting place for the cardinals from emerging nations and also use such an event as a networking opportunity for people from the Commonwealth was put to the UK ambassador Nigel Baker, who then discussed it with Cardinal Cormac Murphy-O’Connor. It led to a reception on behalf of the British government for cardinals from Commonwealth nations that took place at the ambassador’s residence at the Palazzo Pallavincini.

Pepinster does not state who had this idea in the first place and when this reception specifically took place, but Gerard O'Connell's book on this conclave states that it took place on March 7, with Cardinal Gracias and Turkson also present.

Noteworthy here is that, by means of this meeting, the UK government helped Murphy-O'Connor to organize those cardinal electors from poorer countries who might have been otherwise left out from any more organized preparation of the 2013 conclave that ended up electing Pope Francis. Two conservative English-speaking cardinals – Cardinal George Pell, as well as Cardinal Marc Ouellet – were significantly left out of that meeting at the British embassy.

“The most significant guest” at that gathering was, according to the book author, Murphy-O'Connor. Even though he was too old to be able to vote at the conclave, this British cardinal “had a highly significant role to play that night at the Palazzo Pallavicini,” Pepinster explains. And since another cardinal from the UK, Scotland's Keith O'Brien, did not participate at the conclave due to the scandals surrounding him, the UK had only one cardinal – Sean Brady of Northern Ireland – in that conclave.

To return to that fateful gathering in the embassy, “the focus was on those from the poorer nations,” according to Pepinster. “Quite what Murphy-O'Connor said to the cardinals that night is not known.” As Baker told Pepinster, at some point he had left the room to leave the “cardinal to it.” At some point in the evening, the waiting staff also left the room, thus enabling the cardinal “to have a few minutes of totally confidential chat with the red hats from the south.”

Describing the outcome of that March 12-13 conclave, Pepinster points out that Jorge Bergoglio had finally been elected by 115 cardinals, eighty of which came from Europe and North America. She continues: “The other thirty-five were from the rest of the world; left out in the cold during the lobbying in 2005, a sizeable number had been drawn into the process far more effectively in 2013, thanks to the Foreign Office and an English cardinal who understood both Rome and Jorge Bergoglio.”

If Pepinster's account implies here that a foreign government had a role to play in the election of a pope, this should justly cause concern. This report certainly should lead to further inquiries also as to the involvement of British foreign intelligence assets.

She continues, saying that even though the UK had at the time merely one voting cardinal at the conclave, thus seeming to have been “banished to the sidelines,” it played nevertheless “a crucial role in the election of the Argentinian destined to shake up the Catholic Church with his drive for reform and his peacemaking.” Pepinster insists on this point by additionally quoting Tim Fischer, the former Australian ambassador to the Holy See, who stated: “The British influence on the conclave was against all the odds, yet it happened. That was down to one of the most capable cardinals I've ever met – Cormac Murphy-O'Connor – playing the most powerful non-voting role in the choosing of a pope I've ever known.”

Moreover, Catherine Pepinster told the British Telegraph in 2017: “Cardinal Cormac Murphy-O’Connor was a popular, genial man but beneath his jovial exterior was someone of great canniness who knew exactly how the Vatican worked. And that canniness meant he ensured his friend was elected Pope Francis – a pope who has made a huge impact on the Catholic Church and the world. There have been kingmakers in history; Cormac Murphy-O’Connor turned out to be a popemaker.”

Or, as Pope Francis himself put it a few months after his election and during a papal audience with Murphy-O'Connor present: The pope pointed to his old friend and said, “You’re to blame!”

August 2, 2019 update: This report has been updated with more quotes from Pepinster's book as well as correctly designating what areas in the UK certain cardinals came from.