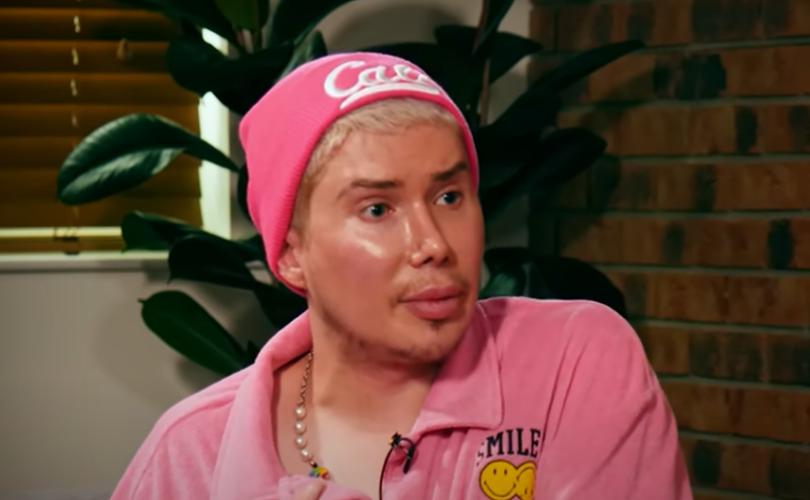 (LifeSiteNews) — Every de-transitioner I’ve spoken to or interviewed has described a moment in which they finally realize that none of it has worked—not the cross-sex hormones; not the surgeries; not the social affirmation.

After pursuing a sex change and being fully convinced that transition will, at long last, make them happy, the realization that it has not is one of gut-wrenching devastation. Walt Heyer described the feeling as if the world was caving in on him—he was not, and could not be, a woman.

Chloe Cole told me she felt suicidal when she realized, after a double mastectomy and years of hormones, that transition had not delivered what she’d been promised.

And Oli London, who became internationally famous for announcing his transition to a Korean woman in 2011, also had a moment where he had to face the truth.

Despite surgery after surgery, he told me in a podcast interview, he realized that none of it was making him happy. “It was just like a snowball effect. It was just a never-ending cycle. And then suddenly I took myself out of that position. I was like, ‘Why am I even doing this in the first place? I’m kind of destroying myself.’ I was looking back at old photos of myself. I was thinking, ‘Why did I do this?’”

He did it, he explained, because he hated how he looked. He’d long been bullied and told he looked feminine; he was a super-fan of Korean pop stars and culture. Like so many of those who reject their bodies, his reasons for doing so were profoundly psychological—and today’s “affirming” therapists are profoundly disinterested in getting to the bottom of why so many young people are seeking to physically alter themselves.

London, a social media influencer, announced that he was transitioning—and then did what trans activists always do: he accused those who refused to affirm his new identity of bigotry. He’d first identified as non-binary and Korean and gotten backlash—when he identified as a woman, however, the support came pouring forth.

Trans activists, he noted, were wary about affirming his transracialism while happy to affirm his transgenderism. “It wasn’t trolling at all. I was literally doing it to be happy,” he noted. “But it was also challenging this narrative that these people say you can do anything you want and everybody should respect your pronouns, respect who you are. And I was like, ‘Why aren’t these people respecting me? They’re complete hypocrites.’”

Like Cole and thousands of other kids who have begun identifying as transgender, London says that social media was a huge driver in his decision to come out first as non-binary, and then as transgender.

“When you go on TikTok, you see these trends, influencers, these non-binary influencers, now teaching kids about pronouns, teaching kids to transition: ‘It’s easy. It’s fun. If you feel like you’re a boy and you want to wear a skirt, you must be trans, you must transition and have surgery,’” he told me. “So social media can be very toxic. And I think it’s very unregulated.” In fact, London regularly booked consultations for plastic surgery—he had 11 surgeries in one day at one point—through Instagram direct messages.

All things considered, London is one of the luckier de-transitioners. Unlike Heyer, and Cole, and so many others, his surgeries were primarily restricted to facial reconstruction. He is grateful, he told me, that he didn’t go further than that. Chloe Cole described to Jordan Peterson what many other de-transitioners go through:

Now, London is converting to Catholicism and says he has found peace with himself. “I posted old photos of me before and everybody says: ‘Oh, you look so much better’,” he told me. “And I’m thinking, ‘I’ve really destroyed myself just to try and feel happy and feel acceptance in society.’ And then there was the moment when I started going to church. I was going quite regularly, and it just made me have some clarity. I was like, ‘You know what? All this surgery is not important. It doesn’t mean anything. It’s what’s inside that counts. If I can have a better connection with God, I can finally find happiness and inner peace. So that really helped turn my life around.’”