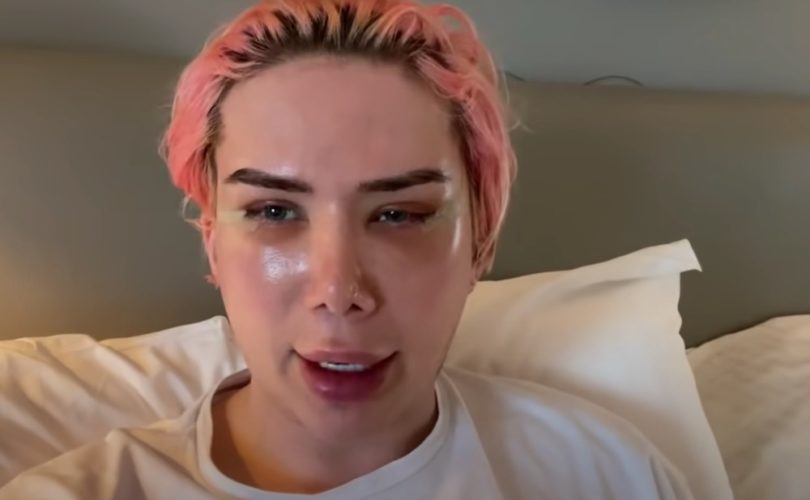 (LifeSiteNews) – Last year, British social media influencer Oli London announced that he was trans-racial and would be henceforth identifying as Korean in imitation of his idol, the singer and K-pop star Park Jimin. To achieve this, he underwent a series of thirty grotesque plastic surgeries to morph himself into Jimin’s doppelganger, spending over $270,000. These surgeries and his own deeply felt identity, he announced to the world, meant that he was a non-binary Korean (later a woman), not a white Englishman.

He announced his “transition” in language that will, by now, be familiar to everyone in a video titled “My TRANSition story” (emphasis his):

I identify as Korean. That’s my culture. That’s my home country. That’s exactly how I look now. I also identify as Jimin, and that’s my career name. I know it’s a bit confusing for people—nobody’s ever come out as Korean, but this is something that you guys know if you’ve followed my journey. For the last eight years I’ve really struggled with identity issues, with who I am… I’ve finally gone through my racial transition surgery.

For obvious reasons, the media didn’t quite know what to do with London. Sure, he’s obviously…not a Korean or a K-pop star. But we have been collectively assured for years now that it is what is on the inside, not the outside, that counts. Indeed, that is precisely how London responded to some of the mocking he promptly encountered online: “If you can be transsexual you can also be TRANSRACIAL. Why are there such double standards & hypocrisy with people criticizing me for being Korean. It’s the same with someone who was born in the wrong body and wants to become a man or a woman. I was actually born in the wrong body!”

RELATED: A ‘Transracial’ coming out video is nothing short of a tragedy in real time

— Article continues below Petition —
Stand with Christian daycare worker fired for refusing to indoctrinate kids with LGBT agenda
Show Petition Text
7434 have signed the petition.
Let's get to 7500!
Thank you for signing this petition!
Add your signature:
Show Petition Text

Now, Oli London is part of a new trend—scarcely a year after his announcement and after eight years of struggling with his identity, he is now de-transitioning. In an interview with Tucker Carlson, London stated that he has now converted to Christianity and that his fictitious identity had been a mistake; that the American culture wars have impacted young people everywhere; and that schools encourage children to “idolize weak men like Harry Styles,” a singer formerly a member of One Direction who has done photo shoots wearing a skirt.

“I realize that was a big mistake, and I just want to be a boy,” he said. “But is it any wonder people like me and young people want to change their gender when we have normalization of this in our schools in this country? Children are taught from a young age, from the age of five in some cases, that it’s okay to change their gender, it’s okay to wear a skirt, it’s okay for a boy to use the gender-neutral toilet when it puts girls at risk. This is the new norm and schools are teaching about toxic masculinity, they’re eroding the alpha male. The alpha straight male has been eroded.”

READ: Ex-trans teen Chloe Cole to sue doctors who removed her breasts when she was just 15-years-old

London went on: “What happened years ago when kids used to idolize Superman and astronauts. Now kids are being pushed by this radical ideology. They’re taught to idolize weak men like Harry Styles. Weak men like Beto O’Rourke.” In another interview, London stated that he now realized his transition was wrong—and that he had returned to his actual identity after abandoning atheism. “This actually kind of saved my life,” he told the Catholic News Agency. “It’s brought me back to who I am as a person, finding God.”

When news of London’s “transition” broke, I wrote in this space that watching his story was like watching a heartbreaking tragedy in slow motion. His recent announcement highlights the fact that as more de-transitioners go public and speak out, those struggling with the reality that changing their appearance did nothing to heal their problems are encouraged to come forward, as well. We may just be at the beginning of a new wave—not of “transitioners,” but of those who have bought the lie, paid the price, and are coming forward to tell us their stories.