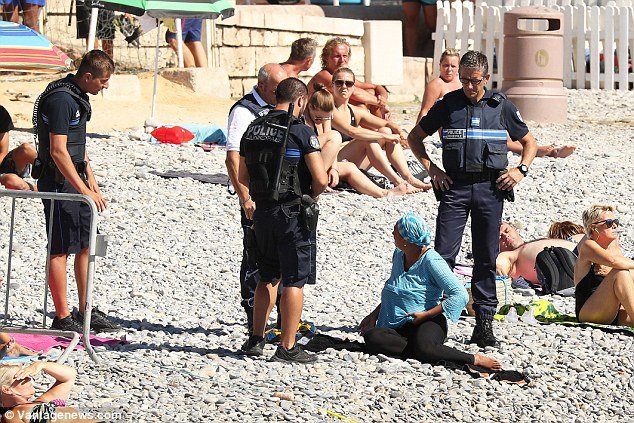 August 26, 2016 (LifeSiteNews) – The insanity seen in Nice, France, the other day which witnessed armed police forcing a Muslim woman to strip off her clothing or leave the beach was over the top. It was yet another demonstration of the depths to which France has fallen.  They’ve allowed their morality to collapse to such an extent that they don’t seem to be able to act sanely in the face of the terrible terrorist attacks they have experienced in recent months.

Rather than crackdown on Islamic terror cells within the country they’ve chosen to strip women of their right to dress according to their views on modesty.

Thankfully, France’s highest court suspended the so-called “burkini ban” today, but they have still to make a final decision.

The photo that circled the world of the Muslim woman at the beach with four armed policemen standing over her as she removes her clothing was startling and a provocation to violence if ever there was one.

Her face wasn’t covered, it wasn’t one of those outfits which show the eyes only. In the midst of women so scantily clad it would make liberal Americans blush and guys with little more than a sock covering their privates, armed police were seen to surround a woman forcing her to undress – a scene which had even liberal commentators up in arms.

Nice deputy mayor Rudy Salles was on the BBC defending the illegality of women wearing clothes to the beach that they consider modest. Just listen to this exchange when he was asked if a Catholic nun would be allowed to be on the beach in her religious habit.

Interviewer: What about a Catholic nun, would she be allowed to appear on a beach wearing her habit?

Salles: No, the same. The same rules apply. The nuns are going on the beach with bathing suits.

It’s equal opportunity modesty banning in France and it really comes down to a crackdown on any and all religious-based morality. Deputy Mayor Salles said so himself:

Religion and the state are completely separated.

Religion is the affair of each one, but each one at home, each one in the church but not on the street.

Did you catch that? Oh sure you can be religious at home or in church but not in public. I guess that’s why when millions protested the legalization of gay “marriage” in France police used tear gas on the crowds, harming children and families. And that’s why France forces all citizens to cover abortion via their tax dollars.

When we can no longer see that modesty is a good and immodesty harmful, when protecting the family is an act punishable by police brutality, when abortion is so celebrated that the state forces every taxpayer to fund it, we know we’ve arrived at a state which the Bible warns about. “Woe to those who call evil good and good evil, who put darkness for light and light for darkness, who put bitter for sweet and sweet for bitter!” says the prophet Isaiah.

In order to attract good people to join them, cults have always used some truth, and the tactic works best when those truths are hidden from the public. This is exactly what ISIS does to recruit young people from all over the world the join their ranks.

They point to the obvious evils of abortion, gay “marriage,” pornography and, yes, immodesty, which the most of Western culture has embraced as good, even though natural law – that internal barometer of good and evil – knows them to be evil. In this way ISIS militants assert the falsehood that America is the great Satan that needs to be destroyed.

John Maguire was just another teen from a small town in Ontario, Canada. He was Caucasian with reddish hair. His sharp wit sometimes got him into trouble. He joined ISIS and wrote on his Facebook page why he joined. “Evil is very prominent in Canadian culture, homosexuality, fornication and adultery are generally accepted,” he said, adding that “women and men are often not properly covered.”

French political philosopher Frédéric Bastiat warned in the 1800s of the doom that would follow the reversal of good and evil.  “When misguided public opinion honors what is despicable and despises what is honorable, punishes virtue and rewards vice, encourages what is harmful and discourages what is useful, applauds falsehood and smothers truth under indifference or insult, a nation turns it's back on progress and can be restored only by the terrible lessons of catastrophe.”

Germans have a saying that goes “wer nicht hören will muss fühlen” which means those who will not listen must feel. When we are reestablishing society after we are hit by that catastrophe predicted by the French philosopher, we will then understand first hand that the reversal of morals paves the way for destruction.