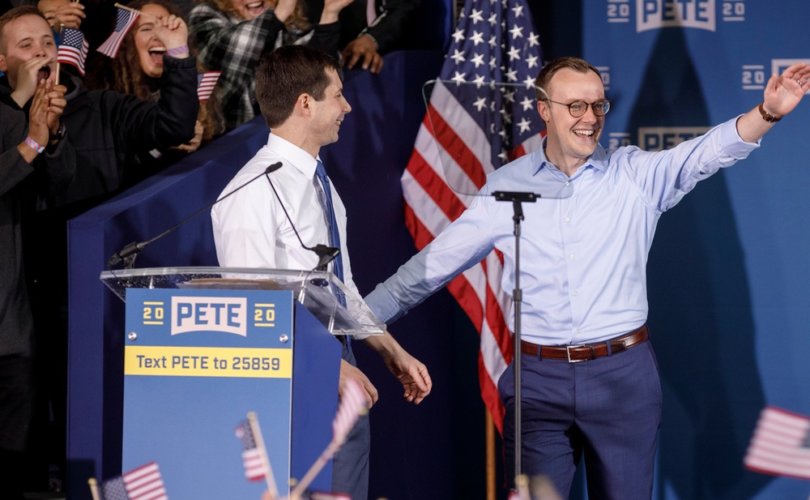 Pete Buttigieg and his 'husband' Chasten.shutterstock.com

May 30, 2019 (LifeSiteNews) – The oh-so-carefully crafted image of heartland conservatism and normalcy of gay Democratic presidential candidate Mayor Pete Buttigieg now has a few chinks in it.

Buttigieg’s “brother-in-law,” Rhyan Glezman, has accused the campaign of misrepresenting the truth about his brother Chasten’s upbringing for the sake of political gain.

When the Washington Post published a fawning Style section article about Chasten Buttigieg earlier this month, it was meant to engender warm fuzzy feelings concerning the nation’s first openly gay presidential candidate and his “spouse.” Chasten was presented as having been raised in a poor family, hostile to his homosexuality. The Post told a familiar Horatio Alger tale of overcoming severe obstacles to rise to the sudden celebrity status he now enjoys – the sort of story that is familiar and irresistible to most Americans.

“His story represents both an American archetype and a modern phenomenon,” declared the Post.

But parts of it evidently were more American fairytale than anything else, resulting in a nightmare for Glezman.

Chasten’s older brother told the Washington Examiner that Chasten is playing the “victim card” for political gain. As a result, Glezman, a pastor in rural Michigan, received hate mail and death threats.

According to the Washington Post, after Chasten told his family that he was homosexual following his high school graduation, “A stalemate took hold of the house. There was a lot of silence, Chasten says, but he remembers hearing one of his brothers utter, ‘No brother of mine …’”

And so, “Chasten packed his bags. ‘I felt like I just could not be there. So, I left.’”

The story went on to imply that Chasten endured homelessness after leaving home.

Yet that’s not at all how his brother remembers it.

“A mayor from a small city and his husband, a child who grew up with nothing and his parents kicked him out…it makes a perfect political story for the campaign,” Glezman told the Washington Examiner.

“He went away,” Glezman said. “He was struggling for a time. But there was nothing on the family end that said he had to leave.”

Glezman was angered by Chasten’s suggestion that their family was poor and that he went without as he was growing up.

“The story makes it look as if he came from nothing, a poor family,” said Glezman. “Chasten had everything, from cell phones paid for, car insurance paid for.”

So now one has to wonder how much of the masterfully painted portrait of the Buttigiegs is actually true.

The gay candidate who “just seems so gosh-darned Midwest wholesome,” of whom the the Los Angeles Times says has a “Mr. Rogers haircut and Howdy Doody grin,” and who appeared on a TIME magazine cover as a contemporary Norman Rockwell/Grant Wood slice of Americana, may not be that at all.

Glezman was not prepared for the reaction to the Washington Post story and how what he views as a lie spread like wildfire online. Hateful missives arrived by email and text. Vitriol was posted on Facebook and Twitter. “There was one that said I should go out to the woodshed and kill myself,” he said.

It was all part of a public discourse, Glezman believes that frequently writes off principled Christians as bigots. “I believe for me, as a Christian, we’re the people being shunned, people being silenced, and a lot of the liberal side of things are becoming the bigots to Christianity and faith,” he said. “They are becoming the intolerant side.”

It will be interesting to watch what the Buttigiegs do during “pride” month, which begins in a few days. The campaign is already selling “LGBTQ Pride Month” merchandise, with proceeds going to organizations advancing transgenderism.