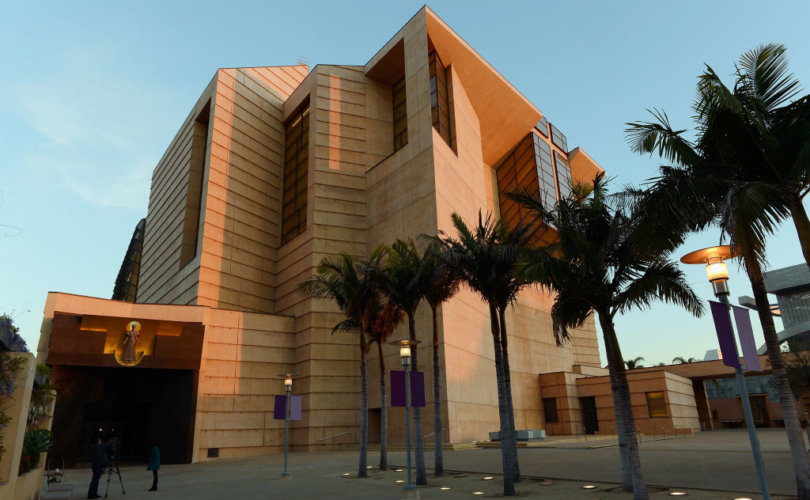 Cathedral of Our Lady of the Angels, Los AngelesKevork Djansezian/Getty Images

Assembly Bill 2223 would allow anyone to commit abortions, by any means, through all nine months of pregnancy. And even if a baby is born alive, the bill would penalize state authorities who investigate infant deaths, effectively legalizing infanticide. The bill’s author, Assemblywoman Buffy Wicks, credits the Conference with helping her craft the language of the bill surrounding “perinatal death.”

READ: California Democrat flounders as Republicans question her on bill that could legalize infanticide

The bill has been approved by the assembly and is currently sailing through the state senate committees with the support of the state’s Democrat supermajority.

The California legislature introduced more than a dozen extreme pro-abortion bills this year that would do everything from subsidizing abortion travel to California, to building new abortion clinics in Los Angeles, to recruiting and maintaining an abortion “corps” in the state Department of Public Health.

Assemblywoman Wicks introduced AB 2223 in mid-February. The bill would give legal immunity to a woman and anyone assists her in reaching any “pregnancy outcome,” including “miscarriage, stillbirth, or abortion, or perinatal death.” Further, the bill would prohibit a coroner’s report from being used in a criminal prosecution against a mother or someone who assisted her in killing her child.

The California Catholic Conference published its opposition to AB 2223 when the bill went to its first committee hearing on April 6. The bill passed, with the perinatal death reference amended to: “perinatal death due to a pregnancy-related cause.”

— Article continues below Petition —
DEFEND Mothers and Babies Against Powerful CEOs Paying Female Employees to Abort!
Show Petition Text
5175 have signed the petition.
Let's get to 6000!
Thank you for signing this petition!
Add your signature:
Show Petition Text

California Catholic Conference’s executive director Kathleen Domingo issued a statement expressing her disappointment that Buffy Wicks had not done more to “clarify” the language surrounding infanticide. “The stated intent of AB 2223 is to ‘prohibit a person from being subject to civil or criminal liability for … a pregnancy outcome.’ The CCC worked with Assemblymember Wicks and her staff to clarify and narrow the bill language to protect innocent newborns and allow coroners to investigate infant deaths; however, we are incredibly disappointed that the imprecise language remains.”

The Conference’s official opposition statement to the bill was shockingly weak:

The California Catholic Conference shares the concerns of Assemblymember Wicks that women not be prosecuted for pregnancy outcomes, including abortion, miscarriage, and stillbirth. Whenever women experience pregnancy loss, whether intentional or unintentional, the caring response of the community is critical in helping women and families heal…

The California Catholic Conference opposes AB 2223 unless amended to redefine or substitute the term “perinatal death” to definitively exclude infant death due to abuse or neglect.

I reached out to Kathleen Domingo on April 6 to ask why the Conference’s opposition statement implied that their opposition was limited to the infanticide aspect. I also asked why the Conference prioritized healing for mothers who kill their unborn children. To be consistent, shouldn’t they also oppose prosecution and support healing for mothers who kill their born children? I received no response.

In response, the California Catholic Conference withdrew its opposition to the bill. Kathleen Domingo released a statement, claiming:

This change definitely closes the door on potential unintended consequences of permitting infant deaths due to abuse, neglect, or abandonment, alleviating the concerns that the CCC brought to the author’s attention…

The California Catholic Conference is grateful to the Assembly Appropriations Committee, and to Assemblymember Wicks and her staff for working with us to clarify and narrow the bill language. The CCC will be removing its opposition to AB 2223 and will remain neutral on the bill.

Public statements from other pro-life organizations in California indicate that the California Catholic Conference is the only group that believes the latest amendment “closes the door” on the bill’s protections for infanticide.

During AB 2223’s latest committee hearing on June 29, when Wicks was asked what exactly was meant by “perinatal death due to causes that occurred in utero” she responded that she had worked with the California Catholic Conference to develop the language and that the Conference was had withdrawn their opposition due to this slightly amended language.

AB 2223 has only one more committee vote and the senate floor vote before going to Governor Gavin Newsom’s desk.

Molly Sheahan, the California Catholic Conference Respect Life Director, said that she worked with Wicks’ office to narrow the bill’s infanticide protection. In a phone conversation on July 6, Molly confirmed that the Conference shares Wicks’ desire to protect mothers from prosecution if they kill their unborn babies, but that overall the Conference is not happy with the bill because of its praise for abortion. She considers the amendments surrounding “perinatal death” to be a victory, because all the pro-abortion bills are sure to pass and the best she could do was make it not as bad.

She persuaded Wicks to amend the infanticide protections and in return she gave up the Conference’s opposition to the bill.

I asked Molly about the fact that voting for AB 2223 is a mortal sin, and referred to the Colorado bishops’ June 7 letter announcing that the Colorado politicians who voted for a Colorado pro-abortion bill were in a state of mortal sin and presumed to be ex-communicated. I asked if it seemed odd that the California bishops would take a neutral stance on mortal sin.

Molly said that the California Catholic Conference is a legislative organization and does not speak for the bishops on everything. She indicated that it’s up to the individual bishops to speak about morals and sin. The Conference lobbies for better legislation, she said, but obviously does not get everything it wants.

On its website, the California Catholic Conference describes itself as “the official public policy voice of the Catholic Church in California. We advocate with policy makers and the public to advance the Catholic vision of human life and dignity, the good society, and concern for those who are poor and vulnerable. We educate Catholics and the general public.”

In light of those statements, it is not surprising that the average person thinks that the California Catholic Conference does speak for the state’s bishops, particularly given the silence of individual bishops on bills such as AB 2223. Do the bishops know that the California Catholic Conference is not speaking for them when it comes to informing politicians and the public about the objectively sinful nature of supporting these pro-abortion measures? Do the state legislators in their dioceses know that they are endangering their souls by voting for the bill? Have they been told that they should not present themselves for Communion until they repent, confess, and are absolved?

Mary Rose Short is the director of outreach for California Right to Life.