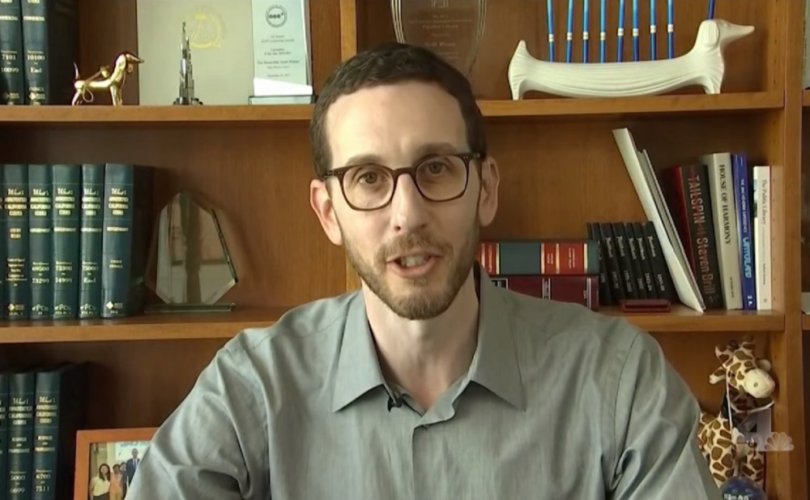 August 18, 2020 (LifeSiteNews) — The last time many of us heard of California state senator and LGBT activist Scott Wiener, he was championing legislation — signed into law by Governor Jerry Brown in 2017 — to reduce the crime of knowingly exposing a sexual partner to HIV without disclosing the infection, previously a felony, to misdemeanor status. This change in law, incidentally, also applied to HIV-positive people who donate blood without informing the blood bank of their status. Civil rights aren’t what they used to be.

“Today California took a major step toward treating HIV as a public health issue, instead of treating people living with HIV as criminals,” Wiener said in a statement at the time. “HIV should be treated like all other serious infectious diseases, and that’s what SB 239 does.” HIV already was treated like an infectious disease, which is precisely why steps were taken to ensure that the disease wasn’t passed on to other people. This inconvenient fact was ignored.

But to folks like Wiener, ideology is far more important than the safety of others. After all, this is the same legislator who co-authored a California bill earlier that same year that could result in prison time for health care workers declining to use a “preferred name or pronouns.” In short, Wiener believes that it should not be a crime to have sex with someone without telling him you are HIV-positive but that jail time is appropriate for those who refuse to refer to a male as “her” at his request. To Wiener, transmitting HIV is too trifling a matter to warrant a felony.. “Misgendering” must be punished by the awesome power of the state.

Now Wiener is on the march again. This time, according to the San Francisco Chronicle, the Democrat is utilizing the final weeks of the legislative session to rally supporters behind SB145, a bill he introduced in 2019 that “stalled” in committee. Wiener’s law would permit “judges discretion over sex-offender registration in all cases involving voluntary intercourse between teenagers 14 to 17, who cannot legally consent, and adults who are less than ten years older.” Wiener wants to decriminalize gay intercourse between adults and minors in certain cases, claiming that California’s current laws discriminate against the LGBT community. From the Chronicle:

According to Wiener, the current law is “horrific homophobia” and “ruins people’s lives.” He told the San Francisco Examiner, “It makes no sense. It disproportionately impacts LGBTQ people because LGBTQ people are far less likely to be engaging in penile, vaginal intercourse.” He also complained that he was being targeted by right-wingers and conspiracy theories for his advocacy, without noting that perhaps some people might oppose giving some sex offenders a pass. But this is California, so Wiener is in all probability pushing at an open door.

Wiener’s political career is another example of what happens when you prize sexual liberation above all. The possibility of passing on a potentially deadly disease through intercourse or blood donation; the rise of compelled speech (and the banning of “misgendering”); the encroachments on religious liberty and freedom of conscience; the more casual attitude to certain types of statutory rape — all of these must be accepted in order to ensure that people can park their genitals wherever they like without feeling discriminated against.

For civil rights activists of the past, ensuring the equal rights and dignity of every human being was the goal. For folks like Wiener, “dignity” means something very, very different.