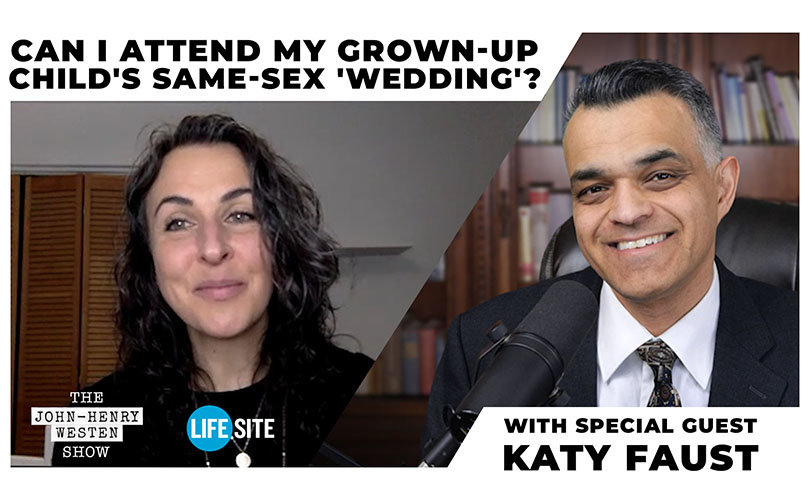 February 17, 2021 (LifeSiteNews) — Some of you who are parents have encountered difficulties in talking with your children if they are in same-sex relationships, or even asking about attending same-sex “weddings.”

In order to answer these and many other questions on family issues, I spoke with Katy Faust, founder and director of Them Before Us, as well as a leading advocate for the rights of children and the traditional family.

Her pro-family work began after 2012 when the debate on homosexual “marriage” intensified and she heard many people pushing false narratives such as that children do not need a mother and father, and that because one stands for the traditional family they are automatically considered to be bigots.

Katy totally debunks these lies. She says that in her decades-long work with children,“the deepest wounds that kids have and experience is when they had lost their mother or father,” whether it be accidental through untimely death, or even intentionally done by divorce. She adds that the loss of a mother or father is “never a small thing for kids.”

Katy says that the pro-family movement is not only against the ideas, choices, desires, and behaviors which lead to the infringement of children’s rights. She also tells me that we are “always for something right [and] for people being in a relationship with God.”

The family advocate describes the intentional loss of both a father and mother for children, such as in divorce and same-sex “marriage,” as a great “injustice.”

Also, Katy and I discuss ways in which parents can take action to protect their children. She highlights “the reality that our children are drinking a firehose of ideology … in the schools … on the social media platforms … from their friends.”

Katy tells me that mothers and fathers must act to counter these cultural forces by first filtering out these dangerous ideologies when the children are young. Once they reach age ten, they should be equipped by their parents “to be experts on all of these difficult subjects.” She says that if parents won’t talk to their kids about this, “the world is happy to do it for you.”

For parents whose children are already in same-sex relationships, guiding them away from that lifestyle can be difficult. Katy recommends that a mother and father must make the point of reaffirming to the child that they are “the best person to talk to” on those issues.

However, she says that the distortion of marriage and the “validation” of a same-sex union must be the line that cannot be crossed.

In a culture and society which rampantly accepts and forcefully pushes ideologies that are not only anti-family and against Christian teachings but also against the natural law, Katy is countering these forces. She says that “all adults must conform to the rights of all children, and, unfortunately, right now in our culture, we’ve got that exactly backwards.”

Moreover, Katy tells me that the culture is in need of adults who are willing to sacrifice their own desires for the sake of protecting the children.

Unfortunately, especially when considering the anti-family turn that courts and political institutions are taking, the fight is difficult and complex. She calls this “a battle on all fronts”: politics, academia, the entertainment industry, and more. “You must be the children’s rights advocate, because if not you, then no one.”

To learn more about Katy Faust and her pro-family work, visit her organization Them Before Us.

It is also available in audio format on platforms such as Spotify, Soundcloud, and Acast. We are awaiting approval for iTunes and Google Play as well. To subscribe to the audio version on various channels, visit the ACast webpage here.

1
A legacy of scandal: Pope Francis says he has ‘carried out’ plans laid during ‘pre-Conclave meetings’
2
Abp. Viganò: ‘Pride’ movement is satanic, must be conquered by ‘reparation,’ charity
3
Dr. Jordan Peterson bends the knee to homosexual ‘marriage’ and parenting in interview with Dave Rubin
4
Mass hypnosis: why can’t people see through the COVID deception?
5
Dr. Vladimir Zelenko was a true hero and patriot who saved many lives with his COVID treatment
Subscribe to Daily Headlines »