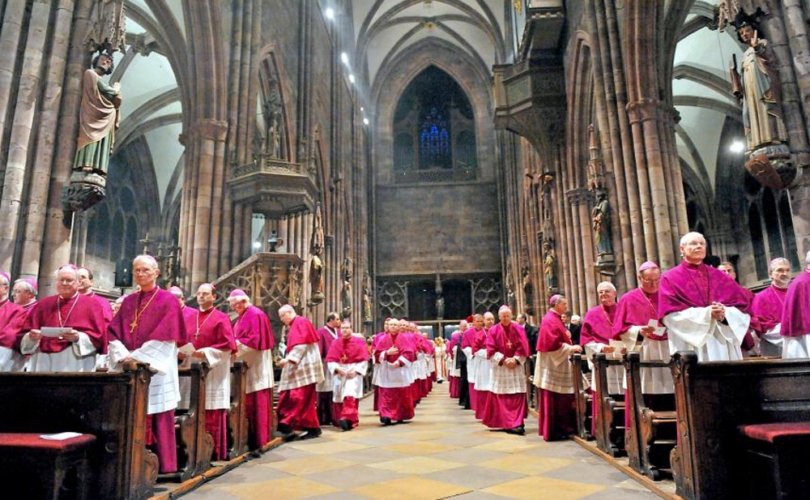 March 20, 2019 (LifeSiteNews) – Catholic priests and laity in Germany are indignant over the March 11-14 spring assembly of the German bishops and their decision to start a “synodal” discussion about the Church's sexual morality and priestly celibacy in light of the current clerical sex abuse crisis. Many of them see this discussion as a dangerous development that could result in a schism.

As LifeSiteNews has reported, the German bishops had unanimously decided, at the end of their spring assembly in Lingen, to start a “synodal path” in their discussions (yet still without an existing synod itself) on the questions of priestly celibacy, sexual morality, and questions of clerical power. Bishop Franz-Josef Bode – the Vice President of the German Bishops' Conference and a promoter of the idea of blessings for homosexual couples – will lead the discussion on sexual morality. The progressivist lay organization Central Committee of German Catholics (ZdK) will be involved in this fostered synodal process. Professor Eberhard Schockenhoff, one of the speakers at the spring meeting proposed to put aside the Church's teaching against homosexuality, contraception, cohabitation, and masturbation.

LifeSiteNews reached out to Father Frank Unterhalt, the speaker of the German priestly group Communio veritatis, asking him for comment. He called the recent decisions of the German bishops a “detestable abuse of the abuse,” because “they obviously wish, under a deceptive pretext of a 'renewal', to establish their horizontal man-church.”

This German priest points out that “homosexuality as the cause of the large majority of [abuse] cases is now being consciously silenced, because 80% of the victims are boys between 14 and 18 years.” “Instead,” he adds, “celibacy and the whole [deposit of] sexual morality are being purposefully put up for discussion, in order to relativize God's Commandments and the perennial Magisterium of the Catholic Church.”

Further commenting on the German bishops' call for a limiting of male clerical power, Father Unterhalt explains that this method aims at “overcoming the hierarchical structure and authority of the Church, which has been instituted by Christ Himself.” The “true clericalism,” however, he adds, is now manifestly shown “especially by the President of the German Bishops' Conference himself and his followers who do not regard their office as a service for the Lord and for souls, but, rather, as an instrument of an immanentist, ecclesial-political career.”

For the German author Gabriele Kuby – who just published a booklet on the question of clerical sex abuse – the “choice of bishops who are to lead this 'synodal process', as well as the collaboration with the ZdK, clearly shows where the journey will take us: adaptation to the zeitgeist at the expense of loyalty to the full truth of the Gospels.” She asks, “why is there unanimous consent of the bishops for this?” She, like Father Unterhalt, points out that the real problem – namely, the homosexual root of the sexual abuse crisis – has been avoided by the German bishops.

As to the question of the unanimous consent to the German bishops' decision to start this controversial “synodal path” questioning the Church's sexual morality, one well-informed source told LifeSiteNews that there had been, indeed, some bishops who abstained from voting for the measure. Contacting the official press speaker of the German Bishops' Conference, Matthias Kopp, LifeSiteNews was told that they do not give information about the specific number of votes of an episcopal assembly.

Mathias von Gersdorff, commenting on the results of the episcopal spring assembly, asks: is “German Catholicism at the Abyss?” and he shows himself to be “highly concerned.” The decisions taken by the German bishops, he explains, “are capable of accelerating and intensifying the gravest developments of the Catholic Church over the last decades, thus leading to a final breach with the Universal Church.”

He, like Gabriele Kuby, points to the fact that Bishop Bode has been appointed to lead the discussion on sexual matters. “Especially the choice of Bishop Franz-Josef Bode (Osnabrück) as the leader of the forum on 'sexual morality' is the worst possible decision.”

Bishop Bode is among the bishops who strongly defend a loosening of Catholic moral teaching, and he even goes so far as to propose a Church blessing for homosexual couples.

Comments von Gersdorff: “They [the German bishops] consciously chose the bishops who have been working most intensely for years against Catholic sexual morality.” In light of this decision, he says, “the message from Lingen is: this is how it is and basta! That is how we want it.”

The words of von Gersdorff seem to be confirmed by a German bishop himself. As Cardinal Reinhard Marx – the head of the German bishops – put it during a 16 March diocesan meeting in his own Diocese of Munich-Freising: “We do not have to wait for Rome now, we have to go our own way.” According to his view, “nothing will ever change,” if one does not exert “a certain pressure, [and show] a certain will to change.” Rome, he added, does not yet wish to face the “systemic question” of sexual abuse, “but it will come, or [otherwise] we have to reintroduce it again and again.” According to another report, Marx also added at that same Munich diocesan council meeting – a gathering of lay organizations of the diocese – that “we want to free ourselves. We need to get rid of the baggage which hinders us to go into the future.”

Von Gersdorff himself sums up the situation by saying that both Bishop Bode and the ZdK which is also to be involved in the upcoming discussions, both aim at “the introduction of the maxims of the [cultural and sexual] revolution of the year 1968 into the Catholic Church. That is to say: the acceptance of wild marriages, moral-theological license for practiced homosexuality, etc.” Thus, he adds, the “aim of reform Catholicism is the dissolution of sexual morality and a negation of the natural law as a moral-theological foundation even up to forming a liberal situation ethics according to the zeitgeist.”

The German Catholic journalist Peter Winnemöller comments on the Austrian Catholic news website Kath.net on the German bishops' spring assembly and asks, in light of the episcopal questioning of the Church's moral teaching: “Will Catholics have to follow their bishops who have the intention – or exercise it – to change the Church's teaching? It is indeed a question as to whether the episcopacy was aware of the potentially schismatic explosive power of the consequences of the current decisions.”

For him, the German bishops “very obviously are not at peace with their office of leadership, nor with their priestly service. Instead of proclaiming the Church's moral teaching,” he adds, “there is the intention to adapt it to the customs of the time.” Winnemöller sees here that the aim is the “deconstruction of the existing morality and its practical consequences.”

LifeSiteNews has now reached out both to Cardinal Rainer Woelki – the archbishop of Cologne – and to the bishop of Regensburg, Rudolf Voderholzer, asking them for comments and whether they truly support the idea of discussing the Church's sexual morality. Cardinal Woelki let it be known that he will not at this moment comment on the matter. We will update the report should we hear back from Bishop Voderholzer.