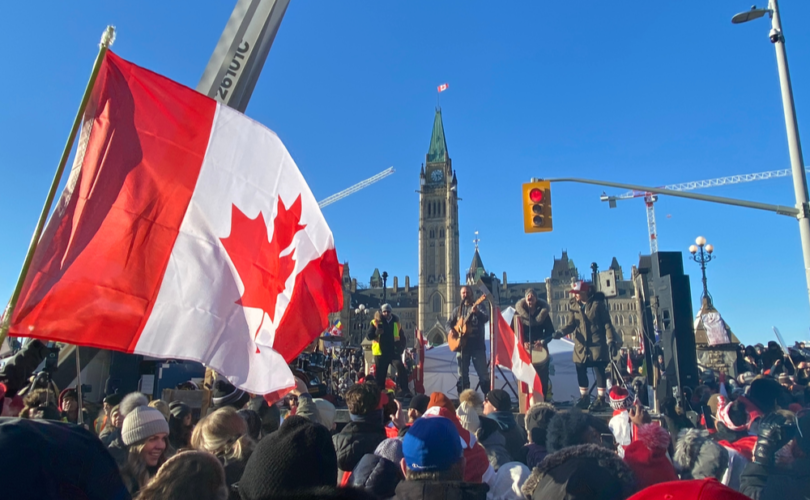 (LifeSiteNews) – Justin Trudeau is an evil man, and he is trying to kill Canada. He is a globalist shill and a Marxist maniac to his core – this is to be sure. However, he has not killed this country, even if he has done his best through his national temper tantrum.

By now you have probably heard that Canada is under a form of emergency legislation. The Emergencies Act has been extended for the month by a vote in Parliament, which was expected due to the dysfunction and partisan foolishness that masquerades as lawmaking these days.

For now, and maybe for a while, Trudeau and his henchmen have taken to freezing bank accounts of financial supporters – so far ill-defined – of the Freedom Convoy, and arrests have been made. This is not to mention the grotesque scenes of police brutality that took place over the weekend against clearly peaceful protesters.

For some, this is proof that Canada is dead, or that she has descended into irreparable totalitarianism. But I don’t agree, and I am not filled with despair, but instead filled with hope, even if of the hopelessly romantic sort.

Even though this is a Canadian issue, it is bigger than just Canada, which is why it has made international press. The reason the saga of the Convoy and the Coup has made such an impression on the hearts of patriots is because patriots round the world are not separated as much as borders and oceans make it seem.

Those of us who honor the nation of our fathers and mothers do so for reasons that go beyond mere nationalism. We honour the legacy of our ancestors because God commanded us to do so: “Honour thy father and thy mother, that thou mayest be long-lived upon the land which the Lord thy God will give thee.”

Patriotism is not just a desire to honour our earthly country, but an in-built yearning to live together in that heavenly country.

I have much admiration and affection in my heart for an American patriot, for a German patriot, for a Mexican patriot, and any other real patriot. We are more closely related than any geographical relation we might share with a neighbour who abhors our nations and their histories.

True patriots understand that killing a nation takes much more than an act of legislation or a vomitus action by a tyrant. You cannot kill a nation any more than you can kill an idea or even the spirit of an idea, because the nation exists in the heart of every patriot, and every patriot is filled with hope — a hope that springs eternal.

Some are disheartened at the fact of seeing Convoy organizers taken away in handcuffs, or peaceful protesters beaten by jackboots.

Surely it is sad to see that individuals have been hurt, but there is more to it.

These heroes have been arrested and scourged because they are fighting. All it took was some trucks and some hope to bring the Canadian government to its knees, with the only solution in the small mind of Trudeau being a national emergency.

Real Canadians have given up their freedoms and willingly been locked down in cages so you could live in a society that locks you down no more.

Yes, Trudeau pulled the trigger and sent in the storm troopers, but what a weak man he must be in order to have done so.

That petty tyrant has shown his hand. He has shown us that he cannot stand to see patriots disobeying his wicked commands.

If I may give the man – I use that term loosely – the benefit of the doubt, I will say he is right in saying that there is a national emergency in Canada: There is an emergent spirit of Canadian zeal that has caused the globalist morons to retreat behind their security forces because an emergency of patriotism.

Along with comments about Canada being “dead” or having “fallen,” I have seen claims that it is a “dark day” for Canada.

It is true, things are a bit bleak in some ways, but that is no reason to be anxious. How can things brighten up if they are not dark for at least a moment?

Do we expect to defeat this tyrannical regime without any losses? Has there ever been a conflict won without casualties or injury?

Currently, Canadian provinces are rejecting the EA and even taking the feds to court over the government overreach. The Act is being debated in the Senate, and it is still uncertain if the draconian power grab will pass that chamber.

If you are unaware, the Canadian Senate rejected Bill C-10 last summer because it was believed by senators that the internet censorship motion was too overreaching and draconian. It was even called “Orwellian” by one senator.

Is there anything more Orwellian than the EA for a moment when there is no reason to invoke the measures?

I am not overly fond of the Conservative Party of Canada, and I believe it is largely their fault that we are in this mess in the first place. They did obeisance to the sacred cow of COVIDism for almost two years, only to recently have been shoved out of their slumber by the Convoy.

Now, as much as I dislike their habitual cowardice, I am also a Christian, which means I believe people can convert.

I would not be a real Christian if I did not believe that anyone could be knocked off his horse like St. Paul.

Conservative politicians have suddenly found their courage, even if it would have been nice to see it earlier in the fight. We also have reason to believe that their courage is not just a passing fad.

It turns out that dozens of Conservative MPs have not only paid lip service to freedom fighters in Parliament, but many of them paid with their own money to see the fight continue.

It is heartening to know that Conservative MPs are actually patriots https://t.co/6EM8ASMHlP

As much disdain as I have for squishy and spineless politicians, these Conservatives did not need to give their own money to the movement. Now that Trudeau is seeking to have financial supporters of the Convoy blacklisted by their banks, there is no backing down now for the MPs who gave their money to the fringe minority with unacceptable views.

In closing, I will encourage Canadian patriots to stay positive about what has happened. For some reason, we all find ourselves in a particular time and place when our country needs us to stand strong.

Our forefathers won at Ypres, Vimy Ridge, and Cortona.

We have long beaten deadly winters and cultivated a nation in the harshest of climates.

So what if Trudeau seeks to act like the White Witch of Narnia. He may believe that he can keep it ever winter and never spring, but there is a thaw just around the corner, and lion-hearted Canadians are just warming up.