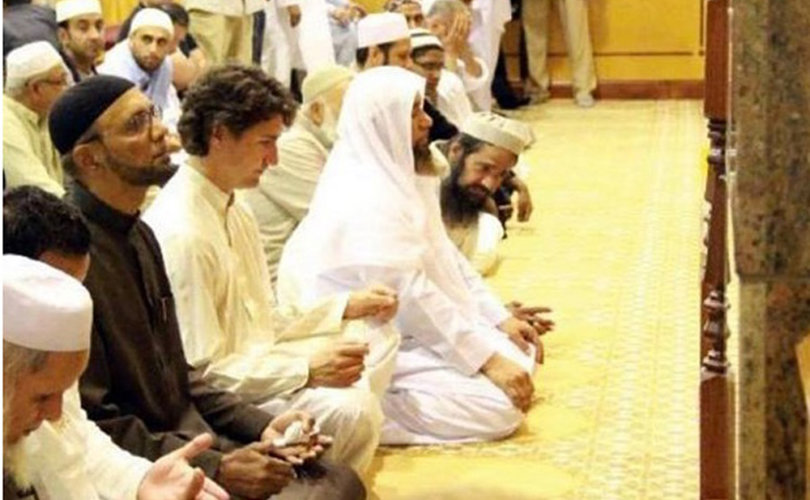 February 9, 2017 (LifeSiteNews) – There is an alrming government development in favor of Islam north of the U.S. border.

A motion that threatens to later lead to a crushing of some core freedoms of all Canadians, resulting in an Islamist-favoring state next to the U.S., appears poised to overwhelmingly pass the House of Commons. This is happening at a time when the country's prime minister, Justin Trudeau, a firm internationalist, is far more amenable to Islam than any prime minister in the nation's history.

Parliamentary Motion M-103 is designed to advance the goal of adding to Canada’s hate crimes laws the undefined crime of “Islamophobia,” which would protect all Muslims and Islam itself from any criticism related to that religion and its Shariah law. The motion has been proposed by Islamic Member of Parliament Iqra Khalid.

All parties so far have indicated they will unanimously vote for M-103. Its passage in the House of Commons on February 16 would in effect set Canada on the path to imposing a form of Islamic Sharia blasphemy law on all of Canada.

The federal House of Commons motion would likely lead to extraordinary, historically unprecedented special protections for the tenets of one religion in Canada, Islam, a religion radically different from and, with some exceptions, generally very hostile to Christianity and all other religions as directed by later verses in the Koran.

The Canadian media source that has provided the most significant critical coverage of the M-103 development has been the online conservative news source, TheRebel.media. The staff of RebelMedia come from the former Sun Media television network. Most other, politically correct Canadian media have so far largely ignored or downplayed the alarming significance and dangers of M-103. Canada has relatively little diversity in news media reporting compared to its U.S. neighbor.

“What I fear is that MP Iqra Khalid, who tabled M-103, may understand Islamophobia to mean what its original promoters, the 56 Muslim-majority bloc if the United Nations known as the Organization of Islamic Cooperation (OIC), say it means. The OIC wants to see the Cairo declaration on human rights become the template for Islamophobia policies everywhere [in the world]. The Cairo Declaration asserts the superiority of Islam and defines freedom of speech according to Shariah law, which considers any criticism of Muhammad blasphemy.”

Kay also expressed her concerns in a February 7 article in the Post, “How long until my honest criticism of Islamism constitutes a speech crime in Canada?”

Fundamentalist Islam (Islamism) was almost entirely foreign to Canada until large-scale Muslim immigration began only a few decades ago.

Experts say that it is more than just a religion. Islam has its own harsh – some label it “totalitarian” – legal code that governs the entire daily life of Muslims. Islamist Muslims give Shariah laws priority over secular state laws that may be in place in non-Islamist nations. In Islamist nations Shariah imposes severe penalties, including severe beatings or death sentences, for those who leave Islam, criticize it or violate its moral codes. In many Islamist nations it also poses mortal dangers to all non-Muslims.

The political religion of Islam, as followed by Islamist (fundamentalist) Muslims, has numerous aspects that violate traditional Canadian democratic and free speech principles and most of the rights provided for Canadians in their Charter of Rights and Freedoms.

Not all Muslims follow the harsher, medieval proscriptions of Shariah from which they fled in their former repressive, violence-prone Islamist countries. That is to say, not all Muslims are Islamists, but too many are. See Muslims vs Islamists. Non-Islamist Muslims tend to more consistently be good citizens and positive contributors to Canada.

“But Islamophobia soon morphed into a catch-all phrase to silence anyone critical of the religion. This applied even if they were denouncing extremism like Shariah law or groups like the Muslim Brotherhood.

It’s now become so bad that it’s even hurled at liberal Muslims in the West for speaking out against the ultra-orthodox values that caused them to flee their home countries in the first place. The term has been rendered meaningless and anyone serious about tackling genuine religious discrimination should toss it aside.

Yet now Canada’s MPs are poised to approve a motion that could very well set the government on the path to criminalizing so-called Islamophobia. This is nothing but trouble for anyone who takes issue with the unsavoury aspects of orthodox Islam.”

“Scratch below the surface and it’s immediately clear this is hardly about religious discrimination in general. It singles out Islamophobia by name and nothing else. There’s no mention of, say, anti-Semitism at all.”

He continues, “This is an attempt to silence rational critics of political Islam.” He concludes, “There’s certainly evidence of an increasing climate of hate in Canada … coming from within Islam. Supremacist groups like the Brotherhood and Hizb ut-Tahrir have a rising presence here. And yet this motion could handcuff us from standing up to them.”

The Rebel Media’s Faith Goldy is an investigative journalist and Christian opponent of M-103. In “Free Speech, Not Sharia!” Goldy explains the dangers of M-103 and passionately appeals to Canadians to contact their MPs demanding that they oppose the motion:

Motion M-103: That, in the opinion of the House, the government should: (a) recognize the need to quell the increasing public climate of hate and fear; (b) condemn Islamophobia and all forms of systemic racism and religious discrimination and take note of House of Commons’ petition e-411 and the issues raised by it; and (c) request that the Standing Committee on Canadian Heritage undertake a study on how the government could (i) develop a whole-of-government approach to reducing or eliminating systemic racism and religious discrimination including Islamophobia, in Canada, while ensuring a community-centered focus with a holistic response through evidence-based policy-making, (ii) collect data to contextualize hate crime reports and to conduct needs assessments for impacted communities, and that the Committee should present its findings and recommendations to the House no later than 240 calendar days from the adoption of this motion, provided that in its report, the Committee should make recommendations that the government may use to better reflect the enshrined rights and freedoms in the Constitution Acts, including the Canadian Charter of Rights and Freedoms.

Canadians may contact their Members of Parliament here or by visiting the MPs at their local constituenccy offices.

Islamic terror is the perfect pretext for a crackdown on Christians: it’s happening in France
Newsbytes – The spread of Islamism