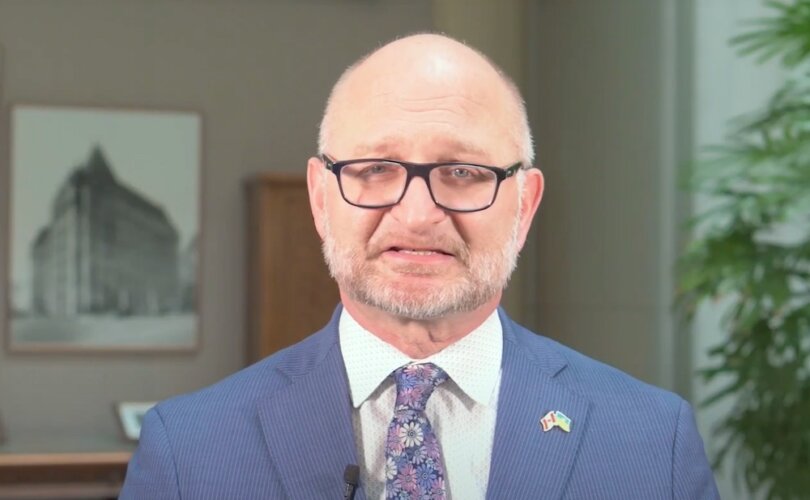 Marco Mendicino (in the grey) and David Lametti texting about how many tanks to send in to break up protests. pic.twitter.com/rdNbwK8h7F

Lametti texted Mendicino on Wednesday February 2 in the evening telling him that the CAF was needed, and told Mendicino to get his act together and do something.

Now, in fairness, it seems as if they were joking, and Mendicino quipped back “how many tanks are you asking for.”

The woman Anita mentioned in the text is Liberal MP Anita Anand who is the acting Minister of National Defence. She has since denied that there was any serious intention to use tanks to crush the protest and protestors.

We will never know if she is telling the truth about Lametti and Mendicino’s potentially murderous off-color joke about using massive military machinery to physically remove protestors from a protest that literally had child bouncy castles in it, but the messages tell us a lot.

Fun activities and bouncy castles are being set up for the kids as the Freedom Convoy protest in Ottawa continues.

You see, this is not the only message that Lametti sent advocating for an egregious military or government intervention in the bouncy castle protest.

On January 30, about 36 hours into the protest that was apparently so dangerous it might have needed tanks to stop, Lametti sent a Signal message to someone in government – who is not identified in the message – asking if the “EA” (Emergencies Act) was needed to clear the traffic.

This Lametti text from Jan 30 is something else.

He wanted to use the Emergencies Act as early as 1.5 days into the convoy.

And was indicating he would treat the protest differently based on race.

(If they were black or indigenous) pic.twitter.com/8Sm8q39m8W

This means that after less than two days of protesting, the Attorney General of Canada – a man who is the de facto lawyer of the Canadian government – was opining about using powers normally understood to be reserved for domestic terrorism or wartime to be deployed because there was a traffic jam.

He said it “took hours” to get back due to the protest, and apparently due to the inconvenience, it might have been necessary to use insane powers to deal with the problem.

I lived in Ottawa for years, and I can tell you that there are multiple ways to get to and from parliament, and the street he mentioned, King Edward, could be walked to from Parliament Hill in about 20 minutes or so if you hustle. In fact, when I moved to Ottawa in 2009, there was a bus strike, and I distinctly remember walking about an hour to classes on King Edward at the University of Ottawa, and I walked much further than the distance between the Hill and that road.

His statement about it taking “hours” also brings up questions about the size of the protest. According to Wikipedia, left-wing outlets reported that the protest had shrunk to about “3,000” by the time Lametti was texting about it taking hours to get to and from work.

Now, I don’t believe those numbers are true, as they seem woefully underestimated, however, if they are true – which the Left would have us believe – then it means the Convoy was a tiny protest in comparison to many protests that happen literally all the time in Ottawa.

On the other hand, Lametti and his government colleagues are trying to justify that the Convoy was so massive and expansive and intrusive and dangerous that it required legislative powers reserved for mobilizing the military to protect Canada from an alien invasion.

I am all for gallows humour, but it’s hard to dismiss Marco Mendicino’s and David Lametti’s texts about sending in tanks as mere “banter” when they actually used wartime powers against the protesters. You can’t fall back on ‘just kidding’ when you come that close to doing it.

Furthermore, we are also told that the EA had to be used, in fact Lametti said as much yesterday, although, it was only needed as long as the NDP supported it, even if it seemed “unseemly” to end it so quickly after employing it.

Lametti and Fergus wanted keep EA longer but they were worried about losing NDP support. pic.twitter.com/8pOiwjEsrt

Lest you think Lametti and the government were being inconsistent with their reasoning, don’t worry because Lametti assured us he was being consistent, because he said so.

Texts from Justice Minister Lametti:
“We needed to stay ahead of the NDP and senators were saying that they would vote against [the EA] based on their view that there was no longer an emergency.”#POEC pic.twitter.com/yAQ2d4P22K

He said that “the vast majority of senators understood that they were being asked to vote on the Emergencies Act at the time which it was invoked, [but] there were a number that didn’t understand that.”

Lametti went on to say that he was being “completely consistent.”

I guess lawyers such as Lametti are just so much more intelligent than the rest of us that they get to use the English language in ways that don’t make sense to the “number” of us that don’t understand.

Now, if you are scratching your head wondering what in the world Lametti was saying, you could just ask him to clarify!

Actually, no you can’t. Because, as he made clear yesterday, since his client is the government of Canada, he doesn’t have to say anything, because of solicitor-client privilege.

WATCH: While discussing the considerations the gov’t made to invoke the Emergencies Act, Justice Minister David Lametti says, “for the legal and the legal interpretation, I will leave that to my lawyers and rely on solicitor-client privilege.”

You may think that since he is the lawyer for the government, and that the government works for you, that he would have to act as if he owed you an explanation of why he can neither confirm nor deny that he may or may not have wanted to employ or not employ tanks in a protest that could have been big or small, and if he was or was not joking.

But, you need to let Mr. Lametti explain to you that he is “not going to link facts to arguments” because “there is a wider set of inputs… about the specific rules of thumb that they use in order to interpret” the legalities behind one of the most radical acts of government in our lifetime. An act which impacted all Canadians, but which we the people apparently aren’t entitled to clear answers about.

“There is a wider set of inputs that are more than just CSIS inputs. You’ve also heard from CSIS about the specific rules of thumb that they use in order to interpret Section 2 which aren’t necessarily imported into Section 16 because it’s a different decision maker.” pic.twitter.com/W8Cc7hd625