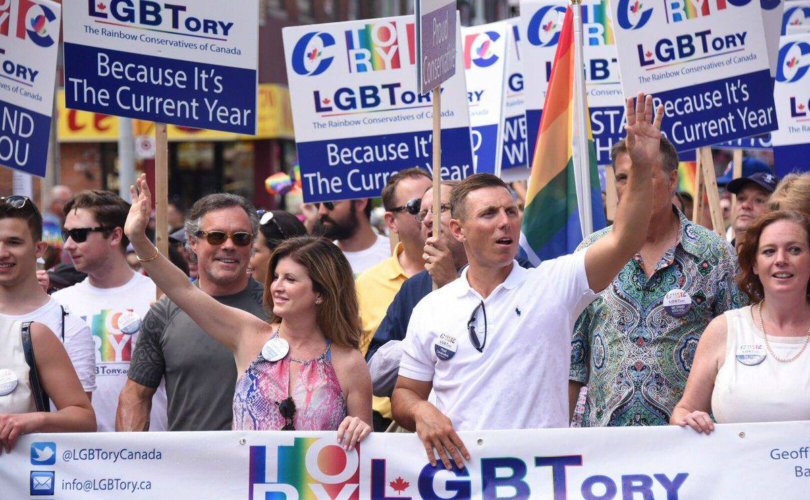 July 12, 2016 (LifeSiteNews) – This year’s Toronto Pride Parade marked a sea change: for the first time, the federal Conservative Party ensured that their presence was loud and visible at Toronto’s Pride parade. The party’s interim leader, Rona Ambrose, and all three of the declared candidates for new federal leader—Kellie Leitch, Michael Chong, and libertarian Maxime Bernier marched behind a “LBTory” banner. Just in case any one was left confused as to their view on gay ‘marriage’ after they voted to delete the party’s position on marriage at the last convention, the rather presumptuous banner read “The right side of history.”

Take that, idiot rural conservatives. And don’t forget to vote for us in the next election!

There are a few questions and observations social conservatives should take away from this. First of all, what function does a Conservative Party serve in a culture with precious little left to conserve? The current Tory leadership has made a revealing political calculation—that the party’s social conservatives, which constitute nearly 40% of its voting base, will get in line and vote for them no matter what: thus marching in a parade with nude men and women, public dry-humping, BDSM displays, and drag queens will not hurt them at the polls. This is a slightly less obvious version of the political maneuverings executed by the notoriously slimy Patrick Brown, who courted social conservatives during the provincial Progressive Conservative leadership race and promptly disavowed so-con values as loudly as he possibly could immediately after winning.

The Tories have good reason to believe that their calculation will work, too—social conservatives by and large accepted Stephen Harper’s protestations that he could do virtually nothing on the issues that mattered to them most, while he stacked the courts with judges who consistently churn out anti-Christian rulings and created a Supreme Court bench that ruled unanimously to legalize euthanasia. Christian voters who constantly defended Stephen Harper as a social conservative seemed almost masochistic by the end of his term as prime minister. If we don’t smarten up and realize that we’ll have to actively fight for any influence we wish to have in the Conservative Party—and we certainly have the numbers to do so, if we put our minds to it—we’re going to end up with another socially liberal Conservative leader, and we’ll be able to distinguish him or her from Trudeau primarily by the location of their float in the Gay Pride Parade.

But politics aside, this year’s Pride celebration also marked the official death of the libertine mantra, first made famous by Trudeau the Elder: “the state has no business in the bedrooms of the nations.” We were told that everyone should mind their own business, and that what people chose to do in the privacy of their own homes was not a matter for the government to oversee. This turned out to be a very convenient and very temporary cover for the real goal of the gay rights activists: using social coercion to demand approval of their lifestyles from political leaders of every stripe. The late Rob Ford, you remember, was constantly berated for being on vacation during Pride week. It was seen as his duty to show up and laugh and applaud. Politicians who decline to attend celebrations that conflict with their values are routinely excoriated by a media that has long given up on any pretence of neutrality.

Thus Manitoba Member of Parliament Ted Falk, a Conservative who declined an invitation to attend Steinbach’s first Gay Pride Parade, was rebuked across the board by media outlets that demanded he put his own values aside in favor of those of gay rights activists. The state is no longer permitted to stay out of the bedroom—it must be in the bedroom, wildly applauding whatever acts take place and celebrating all forms of sexuality. Falk was actually forced to release a statement on his nonattendance at Pride:

“Even without a scheduling conflict, my decision to not attend would be the same. I've been clear on this issue many times, and have made my position public on my values of faith, family and community. Just as I respect the right of people to participate in this event, I am hopeful the event organizers will be respectful of my choice, and the choice of many others, not to participate.”

It’s nice to know that there are some politicians—and indeed, there are still many of them in the Conservative Party of Canada—who politely decline to abandon their values to grovel for the votes of a constituency that is never going to vote for them, anyway. Social conservatives such as myself need more such men to vote for.

One final note, on the whole “Right Side of History” thing that Rona Ambrose and the current leadership candidates seem so sure about: do they ever stop to consider the fact that before the year 2000, gay marriage was illegal across the entire globe? That thousands of years of history stand against a rather feeble 16-year-old social experiment? That their social consensus has every characteristic of a fad, and that expecting those who subscribe to faith traditions as old as time are not going to hop on the rainbow bandwagon quite so quickly?

I doubt it. But I think those are questions worth asking, anyway.