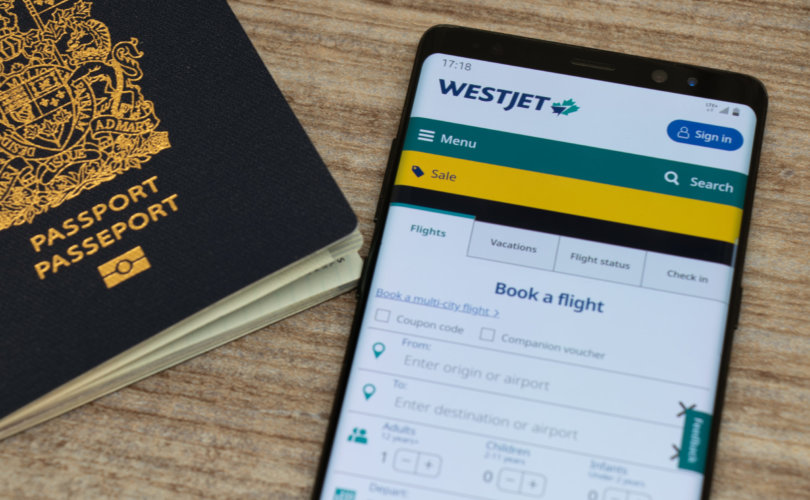 (LifeSiteNews) — Several times over the past couple of years, the Canadian airline service WestJet has found itself in the crosshairs of LGBT activists. Back in 2018, a man identifying as a woman publicly accused WestJet of bigotry after an airline agent was understandably confused between the gender on his identification and the gender he presented as. Despite a hasty and groveling apology from the airline, Trudeau’s then-Transportation Minister Marc Garneau got involved immediately, instructing his staff to contact the airline and express his displeasure to ensure that “measures are taken to prevent this type of incident from reoccurring.”

A staffer for Garneau stated solemnly that: “Canadians are proud of our country’s diversity and inclusion. Minister [Marc] Garneau strongly believes that passengers must feel safe to be themselves when travelling and is very upset about this incident.” The minister did not say what, exactly, agents were supposed to do when the person’s visual ID did not match their physical appearance since ID is supposed to…well, identify.

Apologies, of course, are never enough when the goal of the accusers is to remake society according to their ideology. They don’t want someone to say sorry — they want to overhaul entire industries to reflect their worldview. This year, trans activists accused WestJet of violating their human rights for declining to provide an “x” option for those who have moved past the binary, no longer identify as male or female, and are waiting for us to catch up. Despite how swiftly society has scrambled in line with the diktats of the gender ideologues, nothing will be good enough until everything has thoroughly transitioned and we are all presenting as if we believed what they believe.

And so, inevitably, WestJet is getting in line. They’ve already stated that their new blue pantsuits, skirts, and dresses are gender neutral in order to facilitate inclusivity, and that any staffer can select any combination. This process began five years ago, with the approach being dubbed “genderless.” But the new uniforms take it a step further, with the new name tags having space for airline staffers to include their pronouns.

Now, as I’ve said so often in this space, these small concessions to the transgender movement may not seem like a big deal. But the reality is that these are concessions to a totalizing worldview that recognizes as true and valid fundamental tenets of gender ideology. What if you, like the vast majority of Canadians, do not see the need to supply your “pronouns”— like men and women for the rest of recorded human history? The new norm will be supplying your pronouns — and simply declining to play along with this will be the aberration. You will be making a statement simply by saying nothing at all — but by even by supplying “he/him” or “she/her,” you are tacitly endorsing the validity of the scores of new made-up pronouns that are being foisted on us nearly weekly.

It isn’t just WestJet that’s doing this, either. Professors and staff at universities are including their pronouns on syllabi and asking their students to do the same. Major corporations are including pronouns in email signatures. Taken collectively, these concessions are a recognition of the transgender movement’s premises. That, of course, is the point of all this. Trans activists understand that it is thousands of tiny changes like this that remake society in their own image. It seems alarmist and paranoid to complain about such seemingly insignificant tweaks, and that is what they say when columns like this one are published. But they know what they are doing.

It is all summed up in the late comedian Norm MacDonald’s brilliant response when someone asked him what the word “cisgender” meant: “It’s a way of marginalizing a normal person.”