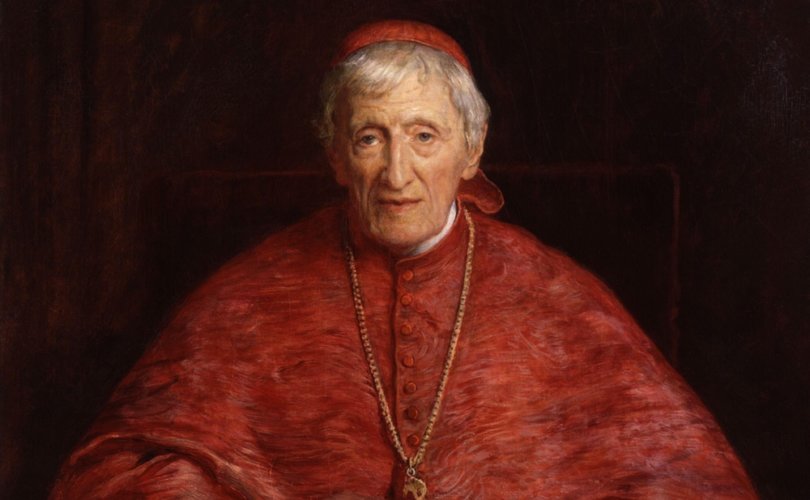 For one brief shining weekend, Blessed John Henry Cardinal Newman has eclipsed the Pan-Amazonian Synod. Lectures and concerts in his honor are taking place all over Rome. English voices float on the air from cafés near St. Peter’s Basilica. “I didn’t know much about his life until now,” confided one excited lady in an accent redolent of Essex.

I had accreditation for a series of talks in Vatican City about Cardinal Newman, and so I presented myself to the Sala Stampa and was told to go to the Sant’Anna gate. Unfortunately, I am still hazy on which gate is which, so I ended up pleading for entrance at another gate in the presence of an equally misplaced English Baroness.

The Baroness and I were sent around the circumference of St. Peter’s Square, had our names checked off lists, entered through the Porta Sant’Anna and got on a minibus sent for the lost and the late. After two priests boarded, the bus moved forward and then up and around, ascending the Vatican Hill to the Casina (“little house”) of Pius IV.

The morning was beautifully sunny, and Vatican City seemed to be composed mostly of Mediterranean gardens: palm trees and all manner of spiky, southern-looking plants, with statues and grottos here and there. One of the priests pointed out the convent in which the Pope Emeritus now lives, and the Baroness asked in hushed tones how he was. The priest said he had heard that Benedict was still sharp-witted but physically “fragile.”

The van dropped us off in front of the lovely little white 16th century villa that is now the Pontifical Academy of Sciences. I showed my press pass and was sent through a front door into an ornate chamber. I froze in dismay.

In a row just ahead of me were Sally Axworthy, the British Ambassador to the Holy See; Cardinal Vincent Nicols of Westminster; Cardinal Pietro Parolin, the Secretary of State for the Holy See; Cardinal Marc Ouellet, the Canadian-born Prefect of the College of Bishops; and Baron Patten of Barnes, the last British Governor of Hong Kong. In a seat nearby was my own ordinary, Archbishop Leo Cushley of Edinburgh. There was also an empty chair right beside me, next to another prelate, but fortunately I realized it was for the Baroness, not me.

Then, thank heavens, I perceived Christopher Lamb of The Tablet standing at the back of the room, so I skittered past all these appallingly important people to sit on the floor in front of him and the rest of the press corps.

The language of the event was English. Cardinal Parolin delivered an encomium in which he described Newman’s “deep, personal love for the Savior,” his charity to his poor parishioners in Birmingham, his asceticism, and his humility. Newman “never thought to impose his own thoughts,” Parolin said and concluded that Newman was a model for both Catholics and Anglicans.

Cardinal Ouellet then gave a very learned paper in support of the thesis that Newman must be named a Doctor of the Church. Ouellet’s arguments included Newman’s own life, the “journey of a believer,” and Newman’s contributions to Catholic theology. Among them were Newman’s focus on faith as a “personal encounter” with the personal God, his critique of both fideism and secular scientism that relegated “faith to the realm of the irrational or private,” and his discovery, in reading the Fathers of the Early Church, that the Church must adopt a new language to confront new cultural challenges and the dangers of heresy.

“Thus, although the deposit does not change, the Church’s knowledge of it progresses, deepens, and is expressed in a new way, always faithful to the original idea,” said Ouellet.

The Canadian cardinal warned against Newman’s canonization inspiring triumphalism of any kind, and he said that Newman’s life and work make us look at “our own divisions.” He even called the famous Anglican convert a “prophet of ecumenism before the word was ever used.” Ouellet also suggested that Newman had effectively prepared the way for Vatican II.

Ouellet’s paper was even more warmly received than Parolin’s. Although some of the Canadian cardinal’s conclusions about the English cardinal seemed a little far-fetched (Newman was a conservative who would have been appalled by the “Spirit of Vatican II”), I was pleasantly reminded that bishops are not supposed to be administrators, primarily, but theologians.

The next speaker, the Rev. Benjamin John King, was a Newman expert from the Anglican tradition. He gave a lively talk on how Newman’s interest in the history of Christianity led to his championing of the adoption of traditions and institutions considered “Roman” by Anglicans, including monastic orders. King argued that Newman’s interest in the formation of laypeople sprang from his Anglican origins and that he had “built a bridge” between Catholicism and the Church of England.

This paper, too, was warmly received.

A short break was called, and to my surprise I found myself addressed by an old pal who works in the Westminster office of an English Catholic MP. Andrew had come to Rome as an assistant to the parliamentary delegation, but was then dying for a smoke, so instead of telling me all about it, disappeared in the wake of the retreating journalists.

He returned for Christopher Patten’s speech about Newman’s thought on universities, but the other journalists didn’t. I wondered why and thought uneasily of the shuttle van and of my promise to my husband to meet him for lunch in the Piazza Navona. Very reluctantly, I left through the back doors.

There was no van outside, so I obtained permission from the guard to find my own way out. I strode around and down past the palm trees, gardens, chaperoned tourists, and male religious in the blazing noon sun until I popped out the Porta Sant’Anna into Rome.

I found my husband sitting at a table outside our favorite restaurant, looking gleeful. Unlike me, he is on holiday and has nothing to do but sit in the sun, eat delicious food, drink Italian wine, and poke around museums – at his own expense, I hasten to add.

“I ditched Chris Patton for you,” I said.