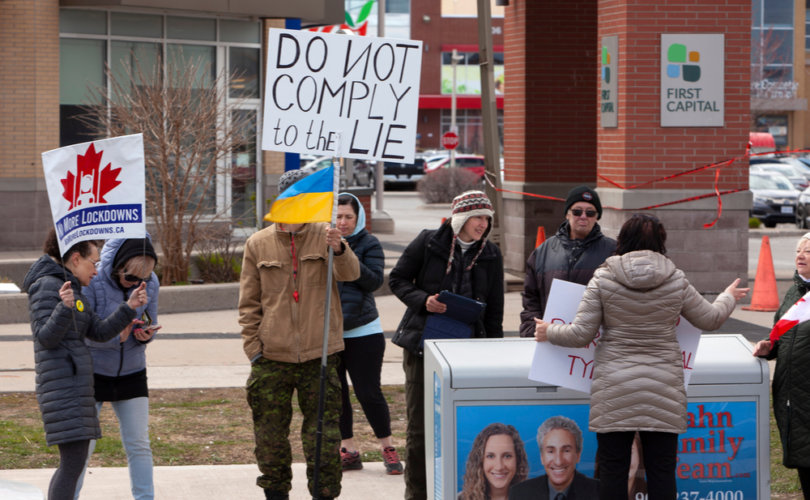 (LifeSiteNews) – Every so often there are moments when you are not sure if you have actually read something or if you have hallucinated The CBC published a scathing critique of lockdowns and vaccine mandates that has caused such a conundrum.

In fairness, the last 21 months to slow the spread have produced a daily dose of head-scratching moments, so perhaps we are a bit numb to them. Day in and day out we see new forms of gaslighting those who seek to see beyond the narrative.

I remember when I realized just how deep the propaganda had sunk into the collective mind of Canadians when I thought I had a “slam-dunk” of an argument to prove that many deaths were misdiagnosed as COVID. “I can prove to so and so that a lot of COVID deaths are not in fact from the virus, which would help so and so be less afraid and move on with his life,” I thought.

Individuals who have died with COVID-19, but not as a result of COVID-19 are included in the case counts for COVID-19 deaths in Toronto.

I sent someone a tweet from Toronto Public Health that said: “Individuals who have died with COVID-19, but not as a result of COVID-19 are included in the case counts for COVID-19 deaths in Toronto.”

It seems pretty clear, doesn’t it? People who didn’t die as a result of a virus are still included in the stats that are released to the public. For a sane person, this is tantamount to fraud, a hoax, whatever. The reply I received after sharing this piece of nerve-calming news about the overhyped severity of COVID: “Yes, that just means it makes you die faster from everything else.”

I didn’t know what to say. Reason had been dispensed with.

This sort of reply is not shocking if you scan through mainstream media portrayals of the declared pandemic. The state and the broadcasters have become like echo chambers of groupthink and Orwellian double-speak, which will either drive you mad or make you angry.

Recently, a Canadian Conservative Member of Parliament was forced to apologize for suggesting COVID was not as serious as polio.

You read that right … The MP had to apologize for suggesting on Canadian television that a disease that causes you to suffocate through paralysis is more serious than something almost 100 percent of people survive – many without symptoms.

Just when you thought the Canadian media landscape was irreparably hopeless, in came a welcome surprise from the CBC, which ought to stand for “Communist Broadcasting Corporation.”

The opening line of the harrowing critique of the very ethos of the CBC itself went: “Listen closely and one might be able to discern the unmistakable sounds of our elected and unelected officials frantically firing up the gaslights and moving the goalposts on COVID restrictions and vaccinations.”

I rubbed my eyes after reading that opening salvo. It seemed more like something you would read at LifeSiteNews than the media arm dedicated to ushering in Klaus Schwab’s fantasies.

To my amazement, the author did not tone down the anti-propaganda narrative at any point in the piece. The very next line he wrote: “It was a precipitous but inevitable shift from ‘two weeks to flatten the curve’ to get the jab or lose your job, and unsurprisingly, there is still more to come.”

As if things couldn’t get any better, the author had the audacity to call out the sacred cow of vaccine efficacy and the hospitalization rates of the vaccinated vs unvaccinated.

“And now, with new case numbers in Ontario essentially split evenly between the unvaccinated and fully vaccinated and questions about waning vaccine efficacy, the goalposts shift again with the rollout of booster shots elsewhere in the country … ”

He continued, “There is, of course, the popular rebuttal that these goalpost shifts are entirely above-board as the “science evolves”… for nearly two years, debate and dissent from burdensome COVID restrictions has been short-circuited with demands that citizens “trust the science”; a modern take on debate-defusing exhortations to “support our troops” during the War on Terror. Every infringement on citizens’ privacy, mobility, autonomy and conscience rights has been justified by officials in the name of the infallible technocratic might of “the science.””

The author, Allan Richarz, concluded by saying, “The government, of course, will never walk back its emergency powers of its own volition. And why would they? … Until public opinion turns sharply against government overreach, we will continue to live in an artificially prolonged state of emergency, beholden to the whims of bureaucrats and elected officials.”

Bravo, Mr. Richarz, after two years of the CBC leading the charge of a mass psychosis, you have landed a significant blow against the oligarchical COVID machine.

But the question must be asked: Why did the propaganda overlords allow such an article to be published? Surely it would only enrage their mask-snuggling, Pfizer-fondling base.

Could the CBC be trying to get ahead of the curve of shifting public opinion?

Perhaps we have witnessed a very public crack in the dam.