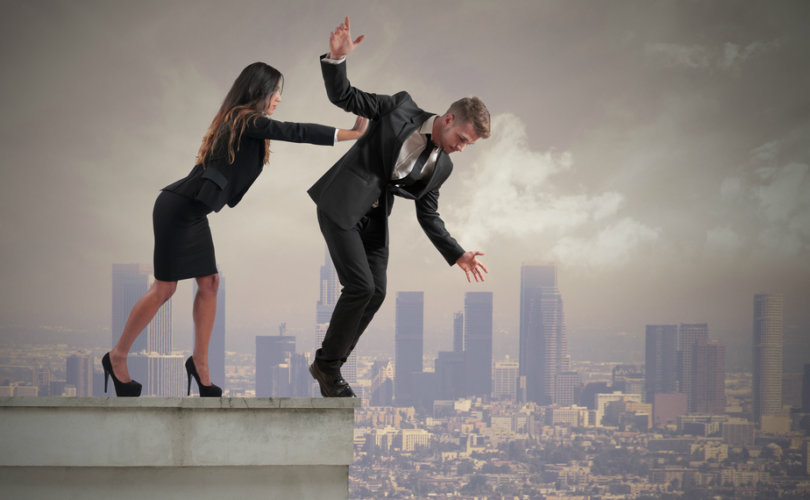 Euthanasia activists: 'Depressed? Here, we can help you kill yourself.'

April 22, 2016 (LifeSiteNews) – Last week Thursday, I was driving to a speaking engagement I was doing on euthanasia—its roots, its dangers, and its resurgence across the West. I turned the radio on, and flipped the dial to the CBC. One of the hosts was speaking to a panel on the Liberal government’s proposed euthanasia law.

“My guests,” the host was saying, “are very disappointed in the proposed legislation.” I nodded to myself, and turned it louder. I was disappointed, too.

But then the host continued: “I’d like to welcome two representatives from Dying With Dignity Canada to the program.”

A society that permits, even pays for, suicide for those with mental illness, reduces them to the level of second-class citizens.

That, apparently, is what qualifies as “dissent” for the Canadian mainstream media. Canada becomes one of only a handful of countries to legalize a procedure that actively ends the lives of human beings and fundamentally transforms the purpose of medical practice, and the two guests invited to speak about it both want to complain that the legislation doesn’t go far enough.

It takes a lot to make me angry. But the two suicide advocates on the CBC did it. They were outraged—outraged!—that those under the age of 18 and those suffering from mental illness could not qualify for assisted suicide.

In fact, they actually had the nerve to claim that to deny people suffering from mental illnesses like depression access to easy suicide made these sufferers “less equal.” Less equal, because the medical system would recognize that they were in need of treatment, not a lethal injection.

“Political language,” George Orwell once wrote, “is designed to make lies sound truthful and murder respectable, and to give an appearance of solidity to pure wind.”

So many people are being sucked in by the smooth deceits being offered on mainstream radio programs and TV shows by the exit strategists advocating for a hasty and “dignified” death.

In such a society, I could walk into a hospital, and demand that a medical professional assist me in killing myself. The attending doctors would ask me a series of questions to determine if I qualified for this “treatment.” After discerning that I have no terminal illness, and do not suffer from depression, they could shrug and tell me that sorry, I do not qualify for a lethal injection. I’m too healthy. My life is worth too much.

But another person my age, suffering the black despairs of depression, could walk through those same doors, and request the same service. Once upon a time, our medical community would spring into action to ensure that this person could not harm himself. In the society desired by the suicide activists, however, this would no longer be the case. Instead, it would be discovered that the ravages of mental illness qualified this person for the final solution to their problem: death.

How can a system that can deny suicide to someone who simply wants to die, but offer it to someone who has mental illness and wants to die, claim that these two people are equal? When a society recognizes, in the most grotesque way, that mental illness in fact makes life not worth living and as a result will offer suicide, they are creating a second class of citizen, one in which many people are worth less. They, after all, are granted the “right to die.” Their condition qualifies them to be killed.

As I pulled into the parking lot of the church I was speaking at and I shut my radio off, one Bible verse, Proverbs 12:10,  popped into my head: “The tender mercies of the wicked are cruel.”