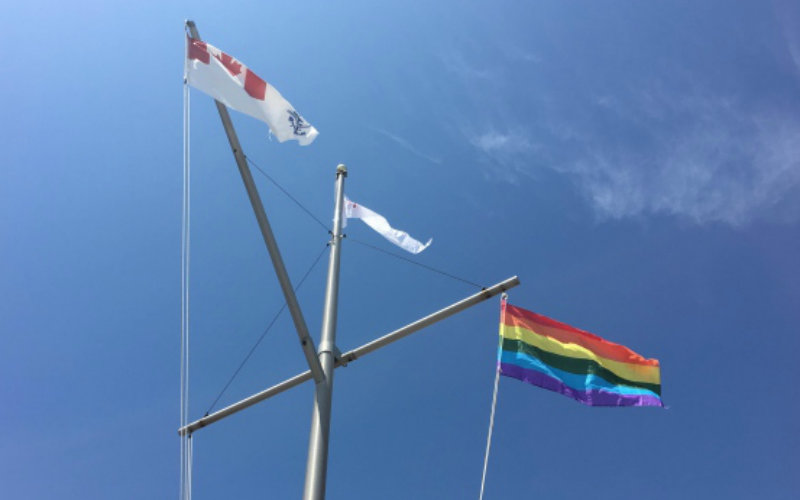 Sept. 19, 2016 (LifeSiteNews) – Last year, I wrote a column detailing the secular progressive strategy to push Christians out of the public square: Two of Canada’s three major political parties have demanded that all of their members support abortion on demand. Law societies across Canada are stating that they will refuse to recognize lawyers coming from Christian universities, since such lawyers must obviously be homophobic. Doctors are being told that they must refer for abortion and assisted suicide. It seems as if every day there’s another story about a gay couple suing a school or a teacher or a university instructor, appalled that there are still people who walk and talk that do not agree with them.

“Had I remained, I would have discovered that one of my tasks for that morning would have been to participate in the raising of the Pride flag over our unit – in some cases, higher than the Canadian flag. Completely unaware of what would happen, I would have been forced into a position to choose whether to follow orders, or whether to disobey them according to the dictates of my conscience.”

In fact, I actually missed this story until a month later:

The Pride colours are flying high this week in a place they never have before.

Naval base HMCS Queen Charlotte hoisted the pride flag Sunday for the first time in history.

“As a unit we're tremendously excited about it,” said Lt.-Cmdr. Rob Alain. “Canadian society has evolved and the Canadian Armed Forces has evolved.”

Canada’s Royal Navy, it turns out, flew the banner of a political ideology that stands in direct opposition to Christianity. Now, Canada isn’t a Christian country, of course – but this action defiantly unfurls our government’s lack of neutrality and dares every Christian sailor in the Navy to shut up and compromise or be aware that they are not welcome. Imagine the outcry if the Navy decided, for a Christian holiday, to fly a banner displaying a cross? Can you imagine the 'triggering' this would cause in the ranks of LGBT activists?

In the meantime, Christian sailors and naval officers are being forced into an impossible position. One naval officer, who told me that he dreamed of being a sailor since he was a boy, wrote to me about what the decision to hoist the Pride flag atop the masts of the Canadian fleet did to those Christians who serve in Canada’s Navy.

“I think some part of conservative identity has always tied traditionalism with national pride and military service,” he wrote:

At least since the Great Wars of the last century, conservatives and Christians have been proud to don the uniform of their country, secure in the idea that service to the nations of the West was an honourable, noble, and sacrificial pursuit. So it was with me nearly a decade ago when I decided to join the Canadian Forces. I’ll never forget the feeling of pride when I first wore the uniform of Canada; the sense of duty and purpose sustaining me through days of long training and sleep deprivation. I have always maintained that sense of pride at my service. Unfortunately, pride of a different sort is sweeping across our culture, and the military has shown that it is not immune to the pressures of cultural relativism. Earlier this year, the Royal Canadian Navy decided for the first time to take an official role in the Halifax Pride Parade, both sending hundreds of sailors to march in and raising the Pride flag above the bases and ships of the fleet. Generally trying to avoid all information about the upcoming Pride Parade, I had remained unaware about the Navy’s participation.

The Friday before the grand Pride March through the city, I was on duty at one of the units in the fleet. As often happens, it was a busy day, and I had a lot of work to keep me preoccupied. A duty day runs 24 hours, from 8 am until 8 am the next day, and one of the many tasks of a duty watch is to maintain ceremonial procedures, including raising and lowering of the flag. As it happens, my hard work that day resulted in my being able to head home early instead of staying overnight. Had I remained, I would have discovered that one of my tasks for that morning would have been to participate in the raising of the Pride flag over our unit – in some cases, higher than the Canadian flag. Completely unaware of what would happen, I would have been forced into a position to choose whether to follow orders, or whether to disobey them according to the dictates of my conscience. There aren’t many theologically conservative Christians in the military these days, but any of us left – and I know others – would have been faced with the same choice to participate in the celebration of what we believe to be sinful and self-destructive behaviour, or to disobey orders.

Orders are the foundation of the military code of service and discipline; without them the entire structure falls apart. And yet, for generations Christians have taken for granted that orders they received in Canada would never force them to participate in a celebration of sin or to openly side against our faith. The consequences of disobeying orders can range from the mild to the severe, depending on the action, but a general rule is that the higher-up the issuing authority, the more severe the consequences. The decision to participate in Pride came right from the top of our chain of command. Beyond official reprimands, the ostracising that would come such a declaration of defiance would be near career-ending. The military being primarily comprised of young millennials; few now understand the traditional Christian understanding of sexual morality. Even for those who live openly as Christians, it is difficult to explain the church’s understanding of morality, especially related to homosexuality – and especially when serving with gay and lesbian colleagues. No matter how rooted in love and how sincerely held our faith may be, the decision to adhere to classical Christian understandings of morality is widely understood to be a form of bigotry and discrimination – and of course, what justification can be sufficient for bigotry? We have now reached the point where those forced into living in the closet are the Christians. Gone are the days of serving a Christian country; our government and Armed Forces have officially thrown in with the sexual revolutionaries.

My purpose in outlining my story is not to spread fear or shame, but to remind Canadians that in the 21st century everyone can be forced at a moment’s notice to either accede to or defy the dictates of modern culture. By the grace of God, I was spared from being forced into open conflict between faith and service, but I came within hours of making a life-altering decision for which I wasn’t remotely prepared. When lawyers are being forced into loyalty oaths and doctors are disallowed from opting out of abortions and euthanasia, it is only a matter of time before Christians in every profession will be put to the test. We must be aware that the culture wars have come home, and that we all must make the decision to bend the knee or face the furnace. We must be ready when the moment comes; I know that next time I will be.

And so we see it spreading. Not just universities, hospitals, schools, and political parties—now even those in the military can be forced to choose between serving their country or staying true to their Christian beliefs. It is truly appalling that Christians are being forced into such positions in the first place. The Pride flag is considered, by definition, “a symbol of lesbian, gay, bisexual, and transgender pride and LGBT social movements.” That genuflecting towards this nakedly political symbol is rapidly becoming a requirement for participation in the public square tells us that our government may believe in many things, but diversity is not one of them.