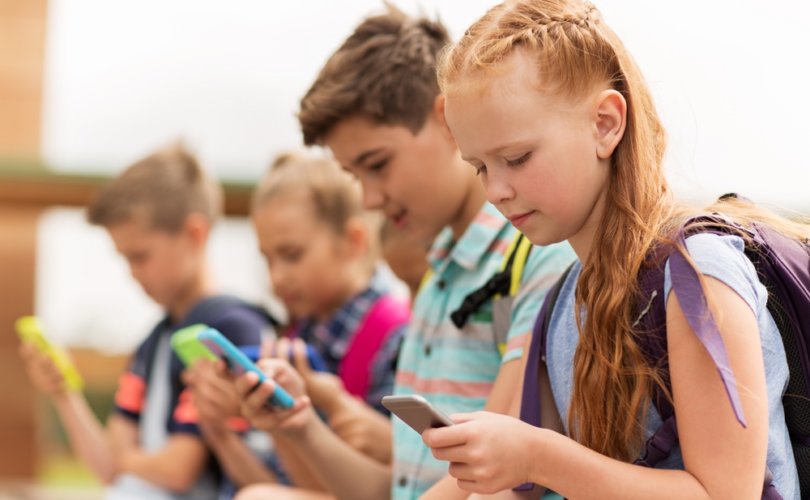 January 4, 2019 (LifeSiteNews) – A few weeks ago, I wrote a couple of columns in this space detailing the growing dangers of smartphones, and explained why I think that parents should avoid providing their children with these devices for as long as possible. The nearly ubiquitous sharing of explicit imagery and messages in middle schools and high schools, the enormous pressure to provide such images, and the near-universal use of pornography via smartphones by teenagers were my primary reasons for this advice.

I provided many examples of young children who were exposed to pornography as a result of having access to these devices, and became corrupted or addicted as a result. This is something I encounter regularly. I’ve noted in the past that even our legal systems are having a hard time trying to figure out how to deal with minors—just kids—who are technically guilty of the distribution of child porn, and must now be saddled with the label of “sex offender” for life. Legal experts and judges have admitted that our laws were not written to net a young teenage boy sharing a photo he received from a young teenage girl and brand him for life, but such are the cruel conundrums of the digital age.

The average age of first exposure to pornography is now a mere nine years old, and sexting is increasingly beginning much, much earlier as well. Children, after all, are growing up in a culture that has been hyper-sexualized in a historically unprecedented way: Entertainment, music, pornography, and youth culture are all infused with it to the point of saturation. Sexting and porn use are now the norm, and they are the norm for children, regardless of the comforting lies parents like to tell themselves to excuse their decision to provide their children with the devices necessary to access these things.

One recent example of just how ugly things are getting surfaced this week in the National Post, where police in the Canadian province of New Brunswick have issued a public warning to parents about children sharing nude and explicit images of themselves online. And by children, they do not mean young teens: Four children between the ages of eight and twelve posted naked photos or videos of themselves to free websites over the past several months. This “image-sharing” is becoming far more common, the police warned parents, and vigilance in these matters is absolutely essential.

The four children, fortunately, are safe, and have all been identified by the RCMP’s Internet Child Exploitation Unit. But police highlighted the fact that this is by no means an isolated incident. “It is unfortunately more common for young people, even children, to share exploitative photos and videos of themselves online, and once it’s online it can’t always be removed,” New Brunswick RCMP Sergeant Chantal Farrah noted in a statement earlier this week. “Many young people also don’t realize that publicly sharing images or videos of a sexual nature of a person under the age of 18 is a child pornography offence.”

If you are a parent, you need to familiarize yourself with what is taking place in the culture right now. I cannot even count the number of parents who have informed me that their children are too good to make these sorts of mistakes, and their children would never do these kinds of things, and that those who work to educate people on the dangers of sexting and pornography are simply waxing hysterical when we attempt to highlight these new realities. In many cases, the very parents who are saying such things are unaware of the fact that their children have been or are involved in sexting or pornography. The cultural pressure to participate in these things is huge, and many parents simply cannot understand the world their children are growing up in—a world that is wildly different from the one they inhabited at the same age.