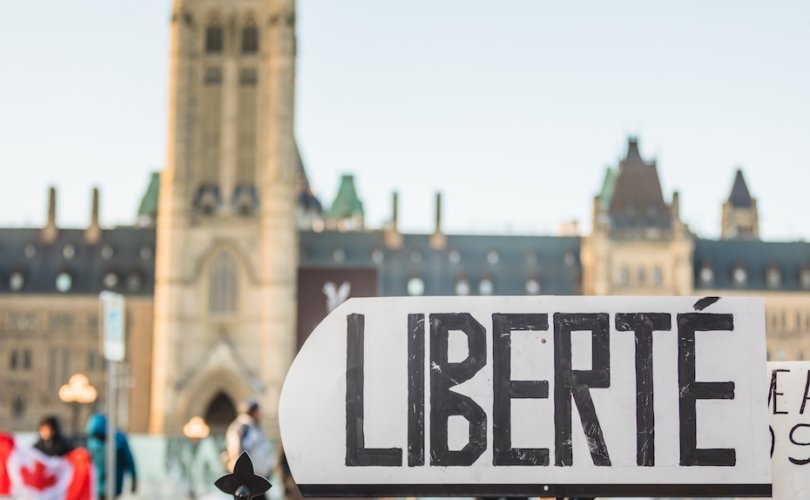 Ottawa, Ontario, Canada - February 13, 2022. Protester Placard on the Fence of the Parliament during Freedom Convoy Protest in Ottawa.Shutterstock

(LifeSiteNews) – As bleak as things have been for Canadians under the reign of the Wicked Witch of the North – Justin Trudeau – freedom has been inching more and more into public life, and it is largely due to the consistent efforts of legal groups who aren’t afraid to take the government to task.

Canadian litigation is a complicated affair, and it is next to impossible to catch the government with its blackface on, but it is not impossible.

Civil liberties legal groups have been mounting more and more pressure against Trudeau’s regime, and the tyrannical regime is being hit from all sides by patriotic groups who are doing their best to hold the would-be dictator in check.

This week, two civil liberties groups have appeared in federal court to press the Trudeau government to release unredacted documents that show the real reasons (if there are any) why the government trampled the Freedom Convoy protest with war-time powers.

Christine Van Geyn, the CCF’s litigation director, said, “The government’s failure to disclose wide swaths of evidence that go to the question of whether it was justified in invoking the Emergencies Act is an attempt to evade meaningful judicial review.”

As has been reported by LifeSite, the federal government has been caught lying about a dozen times regarding the rationale used to justify the invocation of the EA.

It has been alleged by the Liberals that various policing outfits suggested or requested the EA to deal with the three-week block party in the nation’s capital, but pressed under oath, it has been revealed that this is not the case.

Simply put, there are no apparent reasons that could justify the invocation of the EA, and Canadians are starting to catch on.

In May 2020, I spoke with the Justice Centre for Constitutional Freedoms (JCCF) – another heroic freedom group – when I was not yet a LifeSite journalist, and was still simply a concerned citizen. I knew something was wrong, and everything that was happening seemed to me to be illegal, or at least dubiously legal.

I asked how it was the case that churches could be closed by government fiat, even though as a Christian I am required to attend church in order to practice my religion.

The person I spoke with agreed with me and assured me that I was not wrong, but that the nature of Canadian constitutional law meant that it would take months or years to get any meaningful licks in against the government.

Well, as we are now 2 1/2 years into “two weeks to slow the spread,” the legal victories for freedom-loving Canadians are mounting at all levels of government and arbitration.

All those protests and marches, the Convoy and perseverance by Canadians with consciences against the jab-passports are starting to pay off.

Has the regime been toppled? Well, no, but like a Jenga tower, things are looking more wobbly than stable.

You see, the federal government under Trudeau is a bit of a leviathan, but it is not invincible. The sheer volume of opposition against Trudeau and tyrannical provincial leaders is overwhelming.

It is not necessary in a legal sense to win every battle, or even most of the battles. All it takes is one high-profile case to change the tide of a given issue. Once a legal win has been accomplished for a freedom issue, there is precedent for future rulings, which only works to help citizens defend themselves against overreach.

Many will remember the awful scene of Pastor Artur Pawlowski being arrested like a dangerous criminal for the crime of … keeping his church open during lockdown.

It was a bleak scene, to say the least. However, now we can remember his major legal victory against the Alberta government. Charges have been thrown out, and he and his brother are even being reimbursed for their troubles.

A Catholic nurse from Ontario won in arbitration against her employer after refusing the COVID shot, as it was deemed that she was the victim of discrimination for her deeply held religious beliefs.

It is always refreshing when demands of the Canadian people are respected, rather than the petulant demands of tyrants who seemingly hate freedom.

In addition, because of some savvy legal maneuvering by a Toronto-area lawyer representing two freedom-loving Canadian residents, the federal government agency that oversaw the implementation of the vaccine travel mandate was forced to reveal evidence that no science was used to justify the segregation measure.

— Article continues below Petition —
Support Brave Ottawa Detective, Suspended for Investigating the Truth About Child COVID Vaccines
Show Petition Text
3953 have signed the petition.
Let's get to 4000!
Thank you for signing this petition!
Add your signature:
Show Petition Text

As I wrote in June, I believe that the truth about why Trudeau invoked the EA will lead to his resignation … because the truth is, that there are no reasons.

What he did was likely illegal, even if technically permissible given the loopholes in the legislation.

Trudeau’s actions cannot hold up to scrutiny, and as legal victories keep mounting, and as more and more pro-freedom legal groups keep hammering away at COVID tyranny, it is only a matter of time until Trudeau’s goose will be cooked.