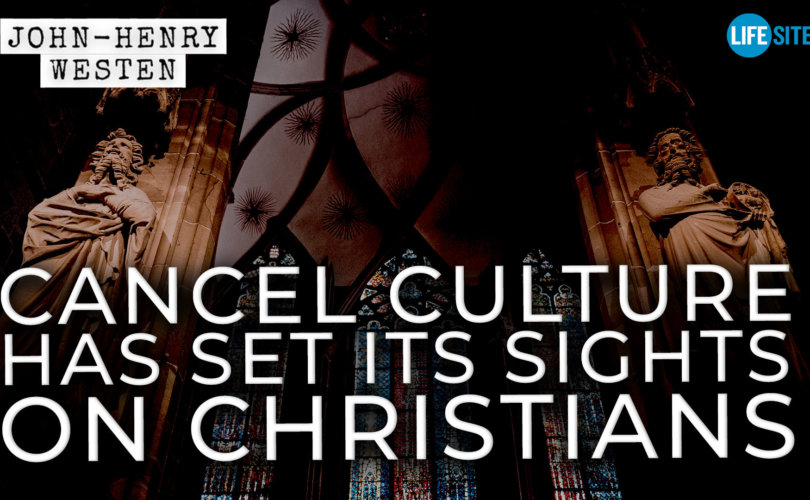 January 18, 2021 (LifeSiteNews) – The news is coming fast and furious. The historic US March for Life has been cancelled, an award from a Pontifical University in Rome to the best-known pro-life priest in the USA has been cancelled. Social media is furiously deleting accounts of not only President Trump but many of his supporters, even banks are getting into the action. And now Christians in America are being targeted specifically. We also have for you some amazing parting words from the First Lady Melania Trump.

Shocking news, and unprecedented since Roe v. Wade imposed abortion on all of America in 1973: the 2021 in-person March for Life has been cancelled for all but a “small group of pro-life leaders,” with the hundreds of thousands of Americans who usually attend the pro-life event are encouraged by March for Life President Jeanne Mancini to “stay home and to join the March virtually.”

The March for Life put out a public statement saying “The protection of all of those who participate in the annual March, as well as the many law enforcement personnel and others who work tirelessly each year to ensure a safe and peaceful event, is a top priority of the March for Life. ” MFL president Jeanne Mancini continued saying “In light of the fact that we are in the midst of a pandemic which may be peaking, and in view of the heightened pressures that law enforcement officers and others are currently facing in and around the Capitol, this year’s March for Life will look different.”

LifeSite asked March for Life leaders if they were pressured by DC Cardinal Wilton Gregory or the Biden Administration or DC police to cancel the March but received no reply.

It is a great shame that the March was cancelled. Coming in the midst of the most severe and false castigation of conservative Americans as violent racists it would have been awesome to see as we have every year for over 40 years the peaceful, joyful, youth-filled, upbeat and awesomely prayerful March for Life with its hundreds of thousands of participants.

Every single March for Life since the event began has been extremely peaceful, as the pro-life movement is a movement of peace and love, arguing against the violence of abortion.

In related news, LifeSite reporter Michael Haynes reports that an award from a pontifical University in Rome to the best-known pro-life priest in America has been cancelled.

Fr. Frank Pavone has been denied an award he was scheduled to receive for his pro-life work, after the Pontifical Athenaeum Regina Apostolorum backtracked on its original decision citing political and ecclesiastical reasons. Run by the Legionaries of Christ (LC), whose founder had been found in numerous accounts to have committed sexual misconduct, the university had originally announced on January 7 that Pavone, the national director of Priests for Life since 1993, would receive the “A life for life” award.

The award was intended to honor Pavone’s “decades of service in the promotion of a culture of life,” according to the now-deleted announcement. “The event will highlight Father Pavone’s role as founder and director of the Priests for Life organization. In addition, it will recognize his activism in speaking in defense of the unborn.”

However, a few days later, the university withdrew the award from Fr. Pavone, as announced in a very brief press release: “After taking into account aspects that were not considered in the original decision, the School of Bioethics will withhold from offering the prize to Fr. Frank Pavone. We apologize for any trouble that this has caused.”

Meanwhile cancel culture continues fast and furious in the mainstream too.

LifeSite’s Doug Mainwaring reports that the owner of a New Jersey gym who has fought to keep his business open during the COVID lockdown said that overnight the gym’s bank account was 100% drained of its funds by the state government. Atilis Gym co-owner Ian Smith released the shocking news in an Instagram video. Have a look.

Unbelievable. The gym now faces a $15K fine per day for every day it remains open.

In a tweet Tuesday night, he wrote, “We will be just fine, but wanted to let Americans know that @AIGinsurance canceled our insurance due to my ‘Social Media profile.’”

Schilling, an outspoken supporter of President Donald Trump, commented that this cancelation is “real and I don’t imagine it’s even close to what we will witness in the coming months, years, if we let the Nazi’s win and the [election] fraud is allowed to stand.”

Following Twitter’s permanent ban of the president of the United States from their platform, with Facebook and Instagram following soon after, a number of figures associated with Trump, including Sidney Powell, Lin Wood, and General Michael Flynn were purged from platforms, as well.

And the Professional Golf Association of America (PGA) stripped its namesake championship from Trump’s Bedminister, New Jersey, golf course next year, while a British golf organization said the British Open will not be played at a Trump property for the foreseeable future.

But get this! President Trump has also been canceled by Deutsche Bank, Signature Bank and Professional Bank of Florida, according to CNN. The Banks are reportedly refusing business with Trump based on the false assertions that he incited the so-called insurrection at the Capitol with his speech.

The utter falsehood of this narrative – even though it was used to vote for his impeachment in the House – was shown by the report of the Capitol Police chief Steven Sund. LifeSite’s Raymond Wolfe reports that in an interview with Sund by Washington Post, the now-former Capitol Police Chief said the “first wave of protesters arrived at the Capitol about 12:40 p.m.”

Remember what I said in a recent show. This is not about Trump, it’s about you. Here is a clip from MSNBC which demonstrates that the Mainstream Media have set their sites on Christians. If your Christianity seeks to honor the truths of Christ and His Word, you are the target. Have a look at this.

And now for some brighter news let’s look at what First Lady Melania Trump has to say.

In her final official message to the American people which was posted on the official White House web page, the First Lady warned citizens that the “paramount” American ideal of having freedom to express “viewpoints without persecution” is now under assault.

And finally, you have to see this report by LifeSite’s Pete Baklinski on a priest’s homily which captures exactly what to expect in the coming four year and how to bear up under it.

“We have a dark four years coming as a Church, and we need to get ready,” said Father Jeffrey Kirby, a moral theologian and philosopher who is pastor of Our Lady of Grace Parish in Lancaster, South Carolina.

Before warning how a Biden administration will affect Christians, Fr. Kirby chastised members of his own parish for voting for a leader who calls himself Catholic while supporting abortion among other evils.