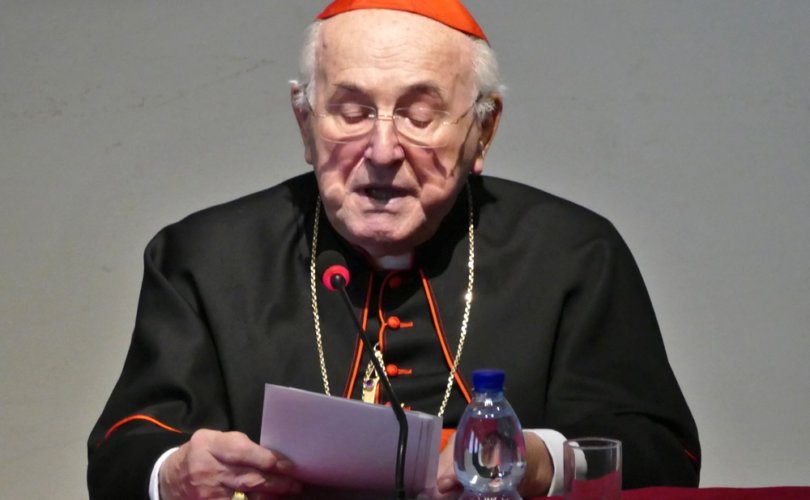 July 29, 2019 (LifeSiteNews) – Cardinal Walter Brandmüller – one of the two remaining dubia cardinals and a respected Church historian – has issued a warning about the “synodal path” as it is being organized in Germany. The German bishops agreed in March 2019 to start a discussion this fall on the Church’s morality, celibacy, the larger role of women in the Church, and clericalism.

In a July 27 interview with the German Catholic newspaper Die Tagespost, Cardinal Brandmüller states that he “in no way” is confident about this process in Germany, adding that so far “nobody knows, first of all, how one will walk this path, and secondly, where this path will lead us to.”

“If one considers the statements of several bishops,” he continues, “then one can well say that this ‘synodal path’ leads to a catastrophe.”

For Brandmüller, however, “we should not be astonished about this apostasy, in light of the statements of Jesus Christ in the Gospel. The love of many will cool, Jesus says in the Gospel of St. Matthew, and many false prophets will appear and lead many stray.” But the “true Church of Christ,” however, does not consider herself merely to be a “pious association,” whose statutes “easily can be changed,” but, rather, she understands that Our Lord “entrusted” to her a “mission.”

Commenting on Bishop Franz-Josef Overbeck's recent claim that after the Amazon Synod, in the Church, “nothing will be as it was before,” Cardinal Brandmüller says that such a turning point is “in any event something that is not anymore the Catholic Church.” The idea of such a turning point, he continues, is a category which is “completely contrary” to an organic development. “A turning point with the result that nothing is afterwards anymore as it was before, would mean the end of the Church,” the cardinal concludes.

Asked whether the upcoming October 2019 Pan-Amazon Synod will lead to the abolition of the “clerical Church,” Cardinal Brandmüller reminds us that it would be better to speak of a “Church, in which there existed from the beginning the spiritual ordained ministry.” In this sense, he continues, the end of the “clerical Church” might well mean “that the image of Church that Martin Luther had – as described by him in his pamphlets of the year 1520 – would now be implemented. And this, then, would not anymore be the Catholic Church.” Here, the cardinal reminds his readers that Luther believed every baptized Christian were, as such, already “pope, bishop, and priest.” Whereas, for a Catholic, the priest stands on the altar “in persona Christi,” (in the person of Christ) by virtue of his sacred ordination.

It is here that Cardinal Brandmüller insists that celibacy is also part of the priest's life in imitation of Christ, or his acting “in personal Christi.”

“So much about celibacy,” he continues, “seems to be also up to discussion during the ‘synodal path’ and at the Amazon Synod.”

The results of such reforms, according to the German cardinal, can be easily predicted. “One can well imagine, when looking at the state of the parishes of the EKD [German Evangelical Church] how it then would also look in formerly Catholic houses of God.”

Cardinal Gerhard Müller, the former Prefect of the Congregation for the Doctrine of the Faith (CDF), recently issued his own similar warning. Speaking about the German “synodal path” and the upcoming Amazon Synod, Cardinal Müller stated, “As a supposed way out of the crisis of the Church, the Instrumentum Laboris [of the Amazon Synod] and the synodal process in Germany both rely on a further secularization of the Church.”