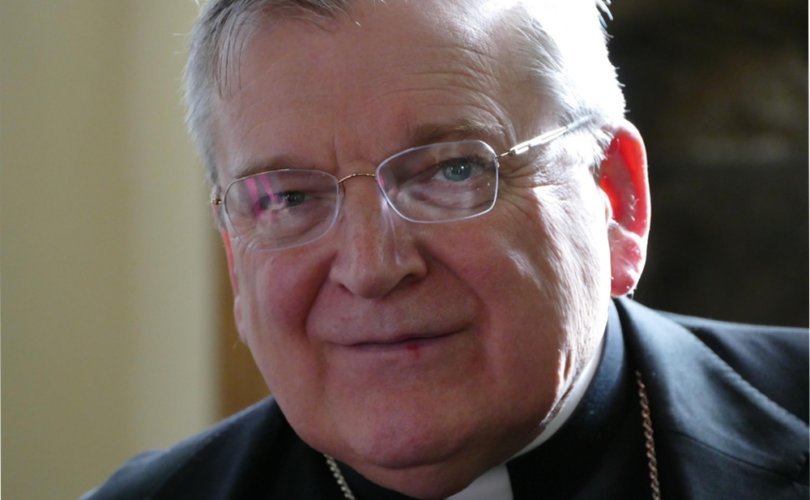 November 11, 2019 (LifeSiteNews) – Cardinal Raymond Burke praised the young man who last month threw Pachamama statues used in rituals connected to the recently concluded Amazon Synod into the Tiber river in Rome, saying he has “respect” for him and has “gratitude” for his “courageous witness to the faith.”

In a new interview with The New York Times columnist Ross Douthat, Cardinal Burke for the first time commented on the Pachamama controversy that took place during the recent October 6-27 Pan-Amazon Synod in Rome.

In this November 9 interview, Burke made it clear that “the statue in question is an idol.” The U.S. Cardinal then went on to praise Alexander Tschugguel, the young man who on October 21 had removed five Pachamama statues from the Catholic church in Traspontina and threw them into the Tiber river, comparing him with the Maccabee brothers.

“I can understand why he found it intolerable that pagan idols be displayed in a Catholic church,” Burke explained. The Cardinal said that the situation reminded him of “similar situations in Old Testament times, for example, the case of the Maccabee brothers, and the case of so many confessors and martyrs who would not tolerate that the Catholic faith be denied through the worship of pagan idols.”

“I can only express my respect for him and my gratitude for his courageous witness to the faith,” Burke said.

Cardinal Burke said during the interview that he knows Alexander Tschugguel “quite well” and that he also regards him “highly,” especially “for his courageous and tireless work in defending the inviolability of innocent human life and the integrity of the family.”

The prelate also commented on the fact that parts of the Amazon Synod's working document is “apostasy from the Catholic faith.” He said it contains a “denial of the unicity and universality of the redemptive incarnation of our Lord Jesus' saving work.” Here, Burke referred to the claim of the document that somehow “Jesus' grace is one element in the cosmos – but it's the cosmos, the world, that is the ultimate revelation.” In line with this thought, one would not be “concerned to preach the gospel” in the Amazon region “because you recognize there already the revelation of God.”

“This is a falling away from the Christian faith,” he concluded.

With these comments, Cardinal Burke seemed to be making a connection between the problematic statements that are contained in the Amazon Synod's working document and the materialization of these statements during the Amazon Synod in the form of worshipping idols which, in the words of Cardinal Gerhard Müller, is a “crime against Divine Law.”

On October 24, Cardinal Müller had given an interview to EWTN's Raymond Arroyo and had said that “to bring the idols into the Church was a grave sin, was a crime against the divine law.”

“The great mistake was to bring the idols into the Church,” stated the cardinal, “not to put them out, because according to the Law of God Himself – the First Commandment – idolism [idolatry] is a grave sin and not to mix them with the Christian liturgy.”

In a new interview with Die Tagespost in Germany, the German cardinal even compared the removal of the Pachamama statues with the cleansing of the Temple by Our Lord. If Our Lord were to do that today, Müller adds, after the cleaning of the Temple “some disciples – in happy union with His enemies who brought Him to the Cross – would have publicly accused Christ” and made sure he would be prosecuted. The disciples would have also accused Jesus of a lack of openness for dialogue, “because He intervened with holy zeal when money changers and animal dealers turned the house of His Father into a market hall.”

Next to Cardinals Burke and Müller, there have been other cardinals and bishops raising their voice of protest against the Pachamama worship in Rome.

Cardinal Walter Brandmüller praised the removal of the Pachamama statues from the church in Rome and called the men who performed this act “prophets.”

Bishop Athanasius Schneider published an October 27 open letter, in which he stated that “Catholics cannot accept any pagan worship, nor any syncretism between pagan beliefs and practices and those of the Catholic Church.” He compared those who removed the wooden statues from the Catholic church with the Maccabees, and said: “The acts of worship of kindling a light, of bowing, of prostrating or profoundly bowing to the ground and dancing before an unclothed female statue, which represents neither Our Lady nor a canonized saint of the Church, violates the first Commandment of God: 'You shall have no other gods before Me.'”

Furthermore, Cardinal Jorge Urosa Savino, Archbishop Carlo Maria Viganò, Bishop Marian Eleganti, Bishop Emeritus José Luis Azcona Hermoso, and Bishop Rudolf Voderholzer, next to different priests, have all made their own statements of protest with regard to the worship of pagan idols in Rome.

In the meantime, a statement has emerged from the indigenous woman who had conducted the October 4 ceremony in the Vatican gardens, Ednamar de Oliveira Viana, of the Maués region in Brazil. She explained that this ceremony was intended to “satisfy the hunger of Mother Earth” and reconnect with “the divinity present in the Amazonian soil.”