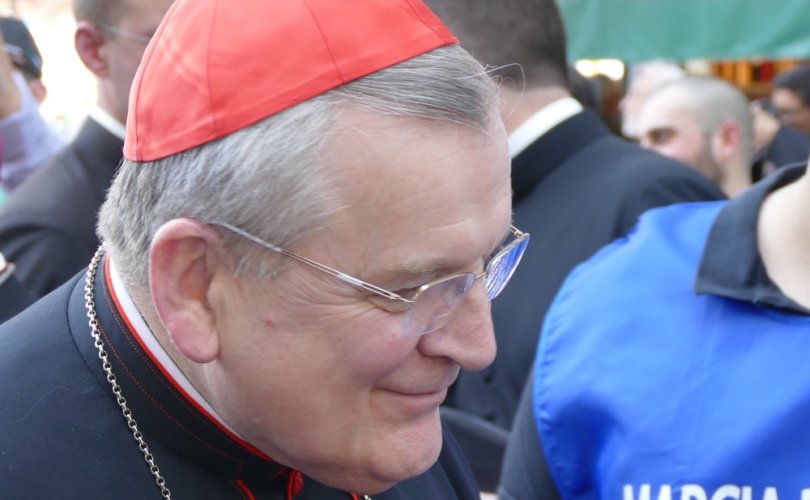 ROME, May 21, 2018 (LifeSiteNews) – Cardinal Raymond Burke boldly voiced an unpopular but vitally important truth about the supreme role of Catholicism during a meeting of pro-life leaders gathered from around the globe in Rome.

During a Q & A session at the Rome Life Forum Burke was asked, “Does the doctrine of the social kingship of Christ entail limits on religious freedom?  That is, if the society recognizes the kingship of Christ, does that not follow that certain expressions of false religion can and should be suppressed for the preservation of the common good?”

“‘Freedom of religion’ does not mean the freedom to practice a religion which is false or a religion which contradicts the law of God,” said the Cardinal, essentially restoring the Church’s proper identity and role in the world among all religions.

“A religion which would permit the killing of infants” or which would allow “any other kind of intrinsic evil,” said Burke, “is why the reality of the kingship of Christ is so important.”  The divine reality of Christ the King “defines the freedom of religion in a way which can avoid” all the “manifestations of false religions.”

Concealed by other prelates, clerics and Catholic academics for decades in the name of promoting ecumenism and avoiding contention, the Church has allowed herself to be silenced due to the proliferation of false religions gripping the planet.  That reticence––to confidently proclaim rightful role of the Church under the rule of Christ the King––has emasculated efforts to evangelize, to teach with moral authority, to draw all men to the  sacraments, to protect life, and even to shield and maintain the immutable definitions of man, woman, child, marriage and family.

Individual Catholics must consciously place themselves under the “Kingship of Christ” in the face of enemies of the Church today attempting to “infiltrate the life of the Church herself and to corrupt the Bride of Christ by an apostasy from the Apostolic Faith,” said the Cardinal.