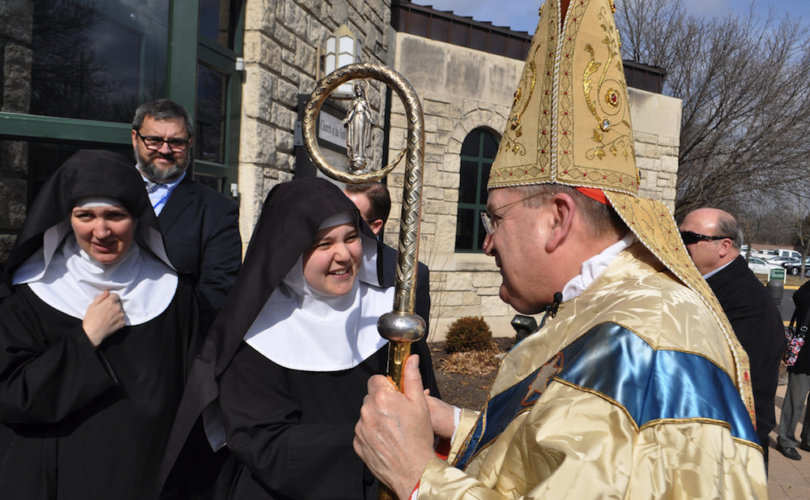 March 2, 2017 (LifeSiteNews) — Cardinal Raymond Burke has been publicly attacked and ridiculed by a Spanish Catholic publication. An article in Alfa y Omega, published by the Archdiocese of Madrid, characterized the Cardinal as a rabble rouser, comparing him to the infamous German dissident Hans Küng.

“In recent weeks Burke has been the favorite star in some media, as Hans Küng has been for almost three decades since 1979 when the Congregation for the Doctrine of the Faith stated that his teachings could not be considered Catholic,” wrote Juan Vicente Boo, a member of the Opus Dei, in his February 23 piece. “Küng took up the duty to correct John Paul II, and was often accompanied by half a dozen noisy theologians,” he added. [Italics in the original]

Alfa y Omega is a journal published under the patronage of the Archdiocese of Madrid which is led by Cardinal Carlos Osoro Sierra who was made a Cardinal by Pope Francis in 2016.

Küng, a Swiss Catholic priest, was forced to hand over his teaching license after publicly departing from Catholic teaching.

For Boo, the supposed similarity between Küng and Burke allegedly arises from his idea that both are trouble makers for the pope. Just as Hans Küng became a headache for the pope in his day by rejecting Catholic doctrine, especially Papal infallibility, so Burke is a headache for Francis by raising the dubia and requesting clarification, his reasoning runs.

He describes Burke as one who “pontificate[s] on what the Pontiff should do.”

But these two cases are nothing alike historically speaking, and are fundamentally different in nature. Nevertheless, Boo does not hesitate to throw them in the same pot.

Hans Küng, who was called “incendiary, superficial, and polemical” at the Second Vatican Council, eventually had his faculties for teaching Catholic theology withdrawn in 1979 by the Congregation for the Doctrine of the Faith, then headed by Joseph Ratzinger.

This punishment followed Küng’s openly anti-papal and anti-Catholic writings, which he very capably handed to media outlets who were eager for aggressive polemics against the Church.

Küng had been under observation by the Curia since 1968 and was repeatedly asked to retract his dissident views. He was even invited multiple times make a case at the CDF to clarify his positions. Instead, he preferred to hide behind the academic barricades of the University of Tübingen, Germany, publishing books that repeated the same anti-papal critiques he had become famous for. He became a kind of pope-critic celebrity.

Though his teaching license was revoked, his priestly faculties were never taken away by Pope Benedict XVI, formerly Cardinal Ratzinger, due to what some suspect was Ratzinger’s personal respect and magnanimity for his fellow countryman.

For Boo, there seems no disparity at all between the dissident persona of Küng and a Cardinal who has mastered Canon Law and who quietly left his position in the Supreme Tribunal of the Apostolic Signatura when asked by Pope Francis to do so.

And Burke followed Canon Law and the required procedure when filing the dubia – a common practice within the Church.

While Burke humbly champions the faith out of love for the Church and her teachings, Boo has no qualms comparing him to a media-savvy dissenting theologian.

In the mind of Boo, the true hero of all that is happening in the Vatican involving the dubia raised by the four Cardinals is the Pope’s media representative, Greg Burke.

“The Burke that really counts in Rome is called Greg and is the spokesman of the Pope although he is hardly even seen. Precisely because his job is not to be a media protagonist or to dignify, with denial or debate, the scandalous information that feeds – for an addicted public – the most mediocre part of the Italian press,” Boo wrote in the column.

At the same time, the author applauded Francis for what he understands to be the pope’s clarity.

“Francis is a born communicator, who hardly needs a spokesman or explanations, and whose pontificate has marked a strong imprint on the Church and the World in only four years,” he wrote.

Curiously, the author claimed to have not seen even a single “storm” in the sea that Peter’s ship now sails through under the guidance of Francis: “The first four years of Francis have been characterized by an absence of storms, compared with the beginning of his predecessors,” he wrote.

The avalanche of criticism and confusion that has not only marked, but even ruled the Vatican over the last months, especially after the publication of Amoris Laetitia, are not enough evidence for the author. He actually insinuated that Cardinal Burke is portrayed by the media as the necessary adversary of Pope Francis due to a lack of “more powerful adversaries.”

Boo seems to live in an alternative reality when he wrote: “What is truly striking now is the consensus and world leadership achieved by the pope throughout the world. In most countries, no bishop raises any reservations. In the Vatican Curia, the resistance has been waning.”

If it is true that the “resistance” to Francis’ agenda has been withdrawn, as Boo suggests, one must ask if this is due to a real “consensus” or perhaps due to a fear of being demoted and even fired for uttering a critical word, as has already happened to many.