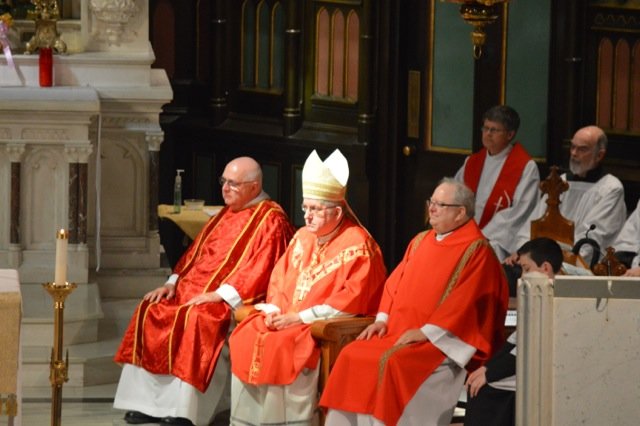 April 11, 2015 (LifeSiteNews) – Cardinal Burke has issued his much-anticipated first response to Pope Francis’ apostolic exhortation, Amoris Laetitia – and I think it’s fair to say that it isn’t what anybody expected.

Certainly, it’s not the fire and brimstone teardown of the text that some of his devotees might have anticipated, or hoped for. In fact, the first two paragraphs are even being interpreted by some as a stinging rebuke to the many conservative Catholic writers who have criticized the exhortation.

They’re wrong (see below). But I can see how they might think that without carefully reading the whole of Cardinal Burke’s response. Indeed, if we have been told that we must “read the full text” before responding to something written by Pope Francis, the advice applies equally to the cardinal’s thoughtful column.

To boil it down even further: the exhortation can’t change church teaching, and therefore it didn’t. Full stop.

At first glance, the argument strikes the reader as a bit…well…beside the point. “What about all those controversial bits!” we want say. “What did you think of those?” And on that matter, the cardinal simply has nothing to say – at least, not yet. In fact, the most striking thing about His Eminence’s response is that he barely references the text of the exhortation, at all. For the purposes of the cardinal’s argument, the document could have claimed that the moon is made of blue cheese, or that it would be pastorally beneficial for Catholics to jump on one foot three times per day.

And this makes perfect sense when you realize that the cardinal is approaching the issue from the viewpoint of a Catholic canon law jurist. He’s not interested (yet) in joining the host of those writers struggling to interpret the sometimes-tortured text. For now he’s interested in stemming the confusion by answering one, very specific question: exactly what authority the exhortation might have to propose novel doctrinal or pastoral practices.

His conclusion is: none.

He is essentially making the same argument (with some shades of difference) as that made this weekend by the highly respected canonist Edward Peters: that is, the apostolic exhortation does not invoke the necessary authority to change the Church's teaching or practice on communion, and therefore it didn't, no matter what it might seem to say. If the words of the document appear to say something different: refer back to canon law and established church teaching and interpret in light of that.

Those who are seizing upon the first two paragraphs of Burke's response as a clear rebuke of those conservative Catholics who have openly decried some sections of the exhortation, are, I think, clearly missing the point. After reading the whole of Burke’s column, it becomes strikingly clear that the primary target of Burke’s rebuke is, in fact, liberal mainstream media outlets and Catholic writers and publications, such as America Magazine and the National Catholic Reporter, who have hailed the exhortation as a welcome revolution.

I strongly suspect that Cardinal Burke had in mind the likes of the “progressive” Archbishop Cupich, who hailed the exhortation as a “game changer,” or the Jesuit priest Fr. James Martin, who this weekend consoled a man in a gay “marriage” who had lamented that the Church says he is “living in sin.” “That language is out,” Fr. Martin gleefully told the man in a Facebook post.

This is the kind of scandal that I believe Cardinal Burke intended above all to reprove.

Not only does this interpretation make the most sense given everything we know about Cardinal Burke's views, but there is abundant support for this interpretation in the text of His Eminence’s column itself. In fact, in the opening sentence, he specifically rebukes the “mainstream media,” who, together with “some Catholic media,” are calling the exhortation “a radical departure from the teaching and practice of the Church.” The “mainstream media” are not lamenting a putative “radical departure” from the Church's teaching – they're celebrating it.

Papal defenders will point out that the cardinal encourages Catholics to receive the exhortation with “profound respect.” Tellingly, however, he then immediately clarifies that such respect doesn’t require total acquiescence. In fact, quite the contrary:

Certain commentators confuse such respect with a supposed obligation to “believe with divine and Catholic faith” (Canon 750, § 1) everything contained in the document. But the Catholic Church, while insisting on the respect owed to the Petrine Office as instituted by Our Lord Himself, has never held that every utterance of the Successor of St. Peter should be received as part of her infallible magisterium.

Certainly, it is telling that Cardinal Burke then devotes some 2,000 or so more words to painstakingly arguing that the apostolic exhortation is simply the “personal reflection” of a pope, urging pastors to interpret the document only in light of established Magisterial teaching, emphasizing church teaching that some have said the exhortation undermines, emphasizing pastoral practices that many have argued the document changes, and saying not a single positive word about the actual content of the exhortation itself. Indeed, the only time he explicitly addresses the text is to criticize its frequent use of the word “ideal” to refer to the Church's teaching on marriage.

This doesn't strike me as the response of a man who believes everything is just fine, and who wants everybody else to think so either. The taut restraint of his juridical prose clearly hides deeper concerns than what he has written here. His primary interest, for now, is to stem the tide of scandal by urging greater restraint in the interpretation of the document.

Of course, that the cardinal likely aimed his barb primarily at certain liberal Catholic writers and publications, doesn’t mean that he didn't also intend to warn “faithful” writers of the possibility of causing scandal of their own by overstating the authority or impact of the exhortation. Indeed, we should approach our reporting and writing on the exhortation with fear and trembling – lest we write something that, in our excessive zeal for the truth, unintentionally adds to the confusion by suggesting the document changes more than it really does.

This has always been the catch-22 for a Catholic journalist writing during a confusing papacy. For me personally, it has often meant that in the midst of writing a column expressing my opinion about one or another confusing statement by Pope Francis, I have simply abandoned the column half-written, afraid of adding to the damage. Instead I have taken my confusion to prayer, and asked for the wisdom to speak only when doing so would help lead people to Christ and His Church, and to keep my opinions to myself when they won’t.

Certainly, there will be (and already are) some who will decry the Cardinal’s response as excessively weak, given the crisis in the life of the Church that they believe the apostolic exhortation represents.

I would share those concerns. After all, while the cardinal is certainly technically correct that the exhortation doesn't have the juridical authority to overturn Church teaching or formally introduce novel pastoral practices – there is no question that it has the authority to create the impression in public opinion of having changed church teaching or practice: and that may be the only kind of authority that ultimately matters.

But something also tells me this won’t be the last we hear from Cardinal Burke on the matter.