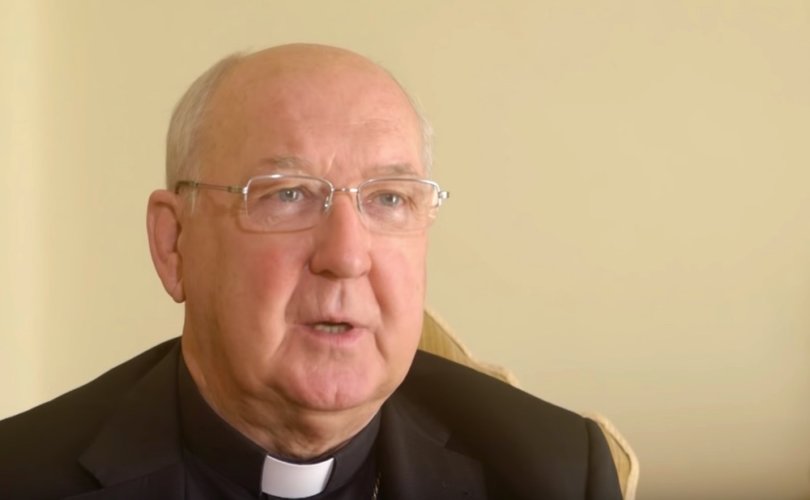 July 24, 2018, (LifeSiteNews) – A prelate who worked under Cardinal Theodore McCarrick––and who rose through the ranks thanks to McCarrick’s patronage––denies that he had any inkling of the Cardinal’s sexual abuses.

Cardinal Kevin Farrell, recently appointed by Pope Francis as prefect of the nascent Dicastery for Laity, Family and Life, said that he was “shocked” and “overwhelmed” at the news that has come out about the disgraced McCarrick.

In the last few weeks, credible reports have surfaced about McCarrick’s sexual abuse of boys and young men, especially seminarians and young priests.

In a short video recorded interview with Catholic News Service (CNS), Cardinal Farrell was emphatic, yet seemingly unable to put together full sentences.

Uttering just 101 words, punctuated with long pauses and ‘ums,’ normal syntax eluded him as he stumbled through the interview:

Farrell also seemed to put distance between himself and his former boss and the man under whom he became a bishop while in DC:

When the six years I was there with him, I didn’t know Cardinal McCarrick prior to his coming to Washington, DC.

Almost nobody is buying what Cardinal Farrell is attempting to convey.

“Cardinal Farrell says that he worked in the chancery but does not mention that he shared an apartment with Cardinal McCarrick. He needs to address it,” said Matthew Schmitz, senior editor for respected First Things Magazine in a tweet.

Cardinal Farrell says that he worked in the chancery but does not mention that he shared an apartment with Cardinal McCarrick. He needs to address it.https://t.co/gDCuqD3xEa

Reacting to Farrell’s brief video clip posted by CNS, The Wanderer columnist Christopher Manion asked in a tweet,  “One minute and 27 seconds of a statement from Cardinal Farrell. She calls this an ‘interview’?! What was the question? Where are the rest of the questions?”

“This is a PR blurb. It is disgraceful that she calls herself a ‘journalist’ instead of a mute mouthpiece of the hierarchy,” continued the Manion tweet.

One minute and 27 seconds of a statement from Cardinal Farrell. She calls this an “interview”?! What was the question? Where are the rest of the questions?

This is a PR blurb. It is disgraceful that she calls herself a “journalist” instead of a mute mouthpiece of the hierarchy. https://t.co/fhRnLhrH4k

Manion is clearly concerned that members of the press might aid the hierarchy in obfuscating their roles in having allowed McCarrick to continue as a prelate despite having knowledge of his predatory sexual behavior.

American Conservative commentator Rod Dreher, a Catholic convert who has since left Catholicism and become an Orthodox believer, was circumspect, but at first gave Farrell the benefit of the doubt:

Notice well that Farrell does not specify what information surprised him about McCarrick, nor is he asked to on camera in this video from Catholic News Service. One presumes he’s speaking about the abuse of minors which, again, I find it easy to believe that he didn’t know. Cardinal Farrell will be credible to me on the broader question of McCarrick’s abuse of seminarians when and if he is asked, and answers, those questions when put to him by non-church media in an uncontrolled environment. This clip has the air about it of an “official statement.”

But he later had second thoughts:

In 2002, Richard John Neuhaus thundered at me on the phone that I should believe then-Bishop James Timlin’s implausible denials that there was anything bad going on with what turned out to be a homosexual cult, the Society of St. John (which had to be thrown out of the diocese by Timlin’s successor). I asked Neuhaus why I should believe the bishop’s denials, and he roared, “Because he is a bishop of the Roman Catholic Church!”

Those were more naive times. It is clear now what bishops do with that credulousness.