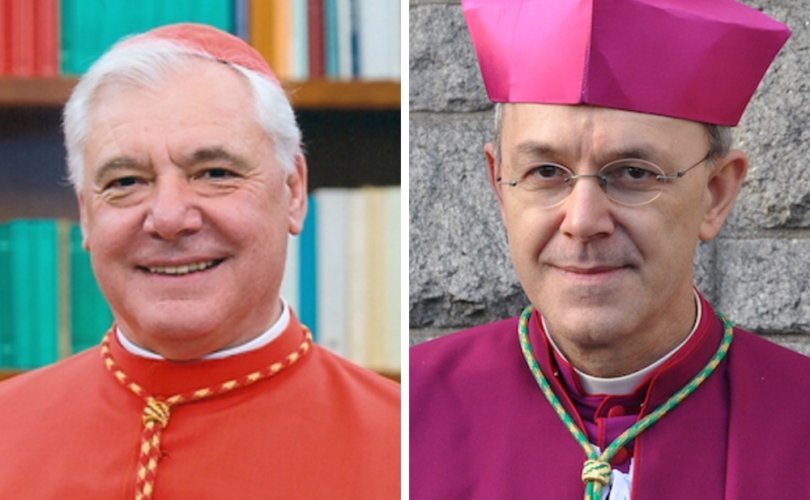 May 12, 2020 (LifeSiteNews) – Cardinal Gerhard Müller and Bishop Schneider, two signatories of the recent Appeal concerning the corona crisis written by Archbishop Carlo Maria Viganò, have now both responded to sharp criticisms of this Appeal.

Müller reveals that none of his fellow German bishops who criticize him have contacted him personally, adding that “it would have been more urgent for the German bishops to agree in their dioceses on the New Evangelization” or to protest against the “persecution of Christians” in the world.

In the face of the strong reaction against this “Appeal for the Church and the World”, Bishop Schneider feels now reminded of the strategy of totalitarian regimes to silence opponents and to avoid a discussion of the facts.

Both Cardinal Müller and Bishop Schneider have made their comments for the German Catholic newspaper Die Tagespost, which will soon publish longer texts by them.

In his new statement, Cardinal Müller said that “it would have been more urgent for the German bishops to agree in their dioceses on the New Evangelization as proposed by Pope Francis; or loudly to protest against the persecution of Christians in the world, instead of working themselves up over a three-page document which certainly is not the last word on the subject – as is also the case with some documents of the German Bishops' Conference – but which is certainly an appeal for reflection.”

The German cardinal had stated already last Sunday that “everybody calls now people of a different opinion conspiracy theorists,” adding: “Of course, interested circles within the Church have used this Viganò text in order to use it to make indignant capital against their supposed opponents.”

Bishop Schneider, in his own response as to why he has signed this May 7 Appeal written by Archbishop Viganò, stated that he feels reminded of the strategy of totalitarian regimes to silence the opponent instead of taking in the facts.

Bishop Schneider insists upon a fair and honest debate and also warns against the possible danger of forced vaccinations which do not permit any alternate paths.

“Thereby,” Schneider explained, “the citizens are being habituated to forms of a technocratic and centrally directed tyranny, which paralyzes civil courage, independent thinking and especially any form of resistance.”

Both prelates respond to criticism, especially in Germany, with regard to the May 7 Appeal that called into question the world-wide response of lockdowns and strong restrictions of freedoms of citizens as measures against the coronavirus outbreak. The signatories of this Appeal – among them two other cardinals, Joseph Zen and Janis Pujats – are concerned for the Church and the world that the COVID-19 pandemic is being used as a “pretext” by world leaders to “control” people, strip them of their fundamental rights, while providing a “disturbing prelude to the realization of a world government beyond all control.” They also reminded the public of the liberty of the Catholic Church who “firmly asserts her autonomy to govern, worship, and teach,” thus making clear that the state has not the authority to decide over church closures. So far, more than 34,000 people have signed this text.

In Germany, the head of the German Bishops' Conference distanced himself from this Appeal, and the German bishops' official news website Katholisch.de especially picked out Cardinal Gerhard Müller as one of the signatories. They especially call this group of prelates, as well as numerous journalists, experts, and priests who also signed this Appeal, “conspiracy theorists.” Even the successor of Cardinal Müller in the Diocese of Regensburg, Bishop Rudolf Voderholzer felt compelled to distance himself from this Appeal. Other major German newspapers such as the Frankfurter Allgemeine Zeitung have joined the public indignation over this Appeal.

The Italian church historian Professor Roberto de Mattei had also made some distancing remarks. Speaking with the Tagespost, he argued that the bishops are leaving their field of expertise – which is that of theology and morality – when making such statements on health matters and politics.

For him, it is understandable when people criticize the interdiction of public Masses and of the administration of the Sacraments during the pandemic. However, he is perplexed when “bishops make statements on the field of health measures taken by government, since this is beyond their field of expertise which is, after all, a theological and moral one.”

At the same time, the Italian professor considers it to be legitimate when laymen, according to their own competence, discuss political, economical, or social measures taken by individual governments. Such debate is legitimate, even though one's opinion should not be turned into dogmas, “since the science of medicine is neither based on Divine Revelation nor on the natural law.”