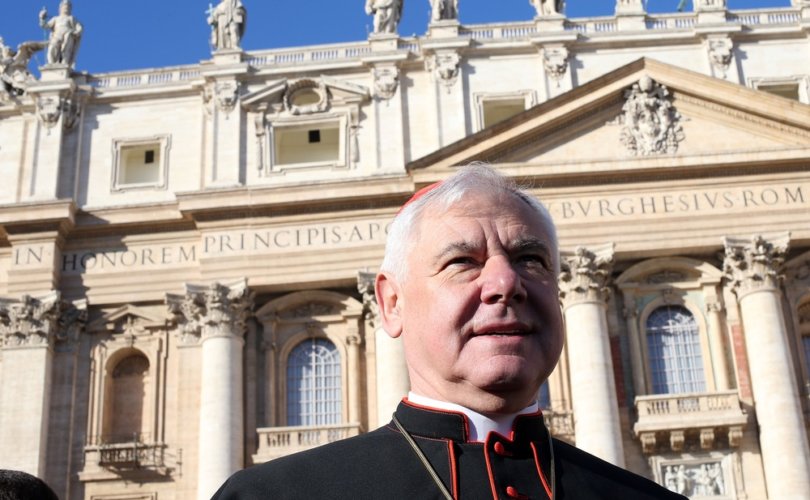 May 9, 2019 (LifeSiteNews) – Cardinal Gerhard Müller, the former Prefect of the Congregation for Doctrine of the Faith, insists that in the history of the Catholic Church, “there has never been an ordained female diaconate (except a blessing, in part, similar to the minor orders and to the sub-diaconate).”

This statement, given to LifeSiteNews, has now been confirmed by some of Pope Francis' words on the findings of his female deacon commission that had submitted its findings to the Pope back in the summer of 2018.

Cardinal Müller told LifeSiteNews that he has “collected and reviewed all the sources for this topic” and that he has also presented his findings in three different books: Priesthood and Diaconate (San Francisco, 2002); Frauen in der Kirche (Women in the Church – Würzburg 2001), and Der Empfänger des Weihesakramentes. Quellen zur Lehre und Praxis der Kirche, nur Männern das Weihesakrament zu spenden (The Recipient of the Sacrament of Holy Orders. Sourceas concerning the teaching and practice of the Church, to administer only to men the Sacrament of Holy Orders – Würzburg 1999).

“For people like Professor Hünermann and others, the diaconate is only the first step to the sacramental priesthood,” the German prelate explains, “that is why individual historical documents are being bent until they fit.”

“It is sad,” he said. “There is no sign of any broad tradition in the Universal Church of a sacramental [female] diaconate.”

Already early in his work as the Prefect of the Congregation for the Doctrine of the Faith, Cardinal Müller had made it clear that a female diaconate is not possible. In 2013, he said: “The Sacrament of Holy Orders, in the steps bishop-priest-deacon can, according to the Church's teaching, only validly be received by a man.” Female deacons existed in certain regions in the history of the Church, he then added, but they “did not receive the Sacrament of Holy Orders in its real sense.” Their role was, for example, to visit women, something that was impossible for a priest to do.

In 2001, the German prelate spoke about the Church Fathers and showed that they always rejected the idea of ordaining female deacons: “All important Church Fathers explicitly rejected as heretical the practice of a few communities separated from the Church to admit women to the diaconate and to the priesthood.”

Having been a member of the Vatican commission that studied the history of the diaconate under the leadership of then-Cardinal Joseph Ratzinger, Müller has dealt with this topic for many years and has always come to the same conclusions. Female ordination is not possible. In 2016, when Pope Francis decided to set up yet another study commission on the female diaconate, Cardinal Müller had pointed out that there had already been such a commission which worked within the International Theological Commission. After a ten-year period of studying the topic, the commission published its own report in 2002.

The report stated at the time:

With regard to the ordination of women to the diaconate, it should be noted that two important indications emerge from what has been said up to this point:

1. The deaconesses mentioned in the tradition of the ancient Church – as evidenced by the rite of institution and the functions they exercised – were not purely and simply equivalent to the deacons;

2. The unity of the sacrament of Holy Orders, in the clear distinction between the ministries of the bishop and the priests on the one hand and the diaconal ministry on the other, is strongly underlined by ecclesial tradition, especially in the teaching of the Magisterium.

Now, for the first time, Pope Francis himself revealed the findings of the female deacon commission that he had established in 2016 and which had submitted its final report in the summer of 2018. At an in-flight press conference on his recent return from a May 5-7 apostolic visit to Bulgaria and Macedonia on Tuesday, the Pope said that, according to the commission, “the formulae of ordination for the [female] diaconate found until now are not the same as for the male diaconate and are more similar to what today would be the abbatial blessing of an abbess.” “There were deaconesses in the beginning,” he added, but the question is whether “it was a sacramental ordination or not.” “What is fundamental,” the Pope explained, “is that there is no certainty that there was ordination with the same form and finality as male ordination.” He further explained, saying:

They [the female deacons] helped, for example, in the liturgy of baptism, which was by immersion. When they baptized a woman the deaconess assisted. They also assisted for the anointing of the woman’s body. Then a document came out that showed the deaconess was called by the bishop when there was a marital dispute, for the dissolution of the marriage or the divorce or separation. When the woman accused her husband of having hit her, the deaconesses were sent by the bishop to look at her body for bruises, and so they testified for judgment.

Thus, Pope Francis' commission appears to have come, in important aspects, to the same conclusion as the previous commission of 2002, and also as Cardinal Müller's own research has shown it. However, the Pope somewhat vaguely added that the members still had some disagreements about this question and that they would thus individually continue their own research.

We will see what Pope Francis will tell the International Union of (female) Superiors General, who three years ago asked him to appoint a commission to study the question of female deacons, when he meets them on May 10.